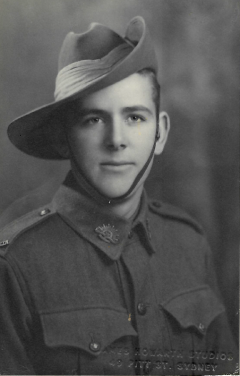 Cecil ‘Bob’ Leckie, was known as “Horse” for his entire World War II career. He’s a big bloke so maybe that’s how he got it when he fronted up to the recruitment office.

“I’m a very friendly type and I went into Adelaide and the first day I was there a chap nicknamed me Horse and that name stuck with me right through the army.” The nickname followed him across New Guinea, then onboard the ship all the way to Japan where he volunteered for the British Commonwealth Occupation Force (BCOF).

Bob was 19 when he enlisted in 1945. He was born and grew up in White Cliffs, the opal-mining town just north of Broken Hill in Far Western NSW. His three uncles had served in the Great War, so service to the country was in the blood. But that wasn’t top of mind when he decided to enlist." My mate and I were shearing out the other side of White Cliffs and I said to this bloke, there’s gotta be a better job than this and he said we’ll join the Army. So it wasn’t really for King and Country.”

While Broken Hill is in  NSW, it’s closer to Adelaide and that’s where Bob ended up enlisting. He did his rookie training, was selected for engineers and went into the bridging platoon.

They arrived at Finschhafen in New Guinea, ready for duty, “But there were no bridges to build so me and another chap ended up being sappers, doing bomb de-lousing, and we cleared the beaches of mines.”

This became Bob’s specialisation even though he’d never had specific training in this area.

“They took us over to Rabaul and we cleared up the mines around there. It was also where they were having war trials for Japanese soldiers and officers and they shot a lot there.”

Bob was getting a fast education in the hard realities of war. On the one hand, here he was clearing up the mines and unexploded ordinance that schoolkids and farmers could easily step on if not removed. On the other, he found himself face-to-face with the former Japanese enemy daily and they just seemed like pretty ordinary people.

It was a long wait to get home since he wasn’t part of a big contingent. He also felt he’d come this far and had a lot more to offer. Bob and his mate Rocky volunteered for the British Commonwealth Occupation Force (BOCF) in Japan which was 45,000 strong with troops and support from Britain, India, New Zealand and 16,000 from Australia.

On the ship HMAS Manora from Rabaul to Japan, Bob says he mingled with the former Japanese POWs, a couple of thousand of whom were being transported back home.

“Some of them had something to prove but the rest were ordinary blokes and we used to laugh and joke with them, poke fun at each other without animosity between us.”

Even in Japan his nickname had followed him. “When I got off the boat in Japan, a chap saw me and said “Horse has come.”

Being in Japan was an eye-opening experience particularly since he was first posted to Hiroshima and witnessed first hand the horrific effects of atomic warfare.

“I wonder sometimes what happened to the people in Hiroshima that survived because so many were burned. It was horrible.”

Bob and Rocky’s work as sappers was securing all the bombs and other munitions stored throughout the region around Hiroshima. Many of the bombs they dug up were US bombs that had never gone off.

Generally, Bob reckons the danger of working as a sapper was not exaggerated. “While I was never directly under fire, I did let off a lot of bombs and we lost two mates while cleaning up bombs.”

Because the US Manhattan Project that developed the atomic weapons was so secretive, the troops knew little or nothing about how the bombs that fell on Hiroshima and Nagasaki worked but Bob claims there was a clear difference in their impact. In Hiroshima there were still cement buildings left standing. In Nagasaki Bob says there was nothing left at all.

As part of BCOF, the young sapper inevitably found himself learning Japanese and getting to know the locals and sensed their grief at the deprivation they suffered. “It was a terrible place when we first went there. They were starving, the kids were starving and begging for food.”

Cecil Leckie and his wife

As for the Australians who made up the occupation force, Bob contends they were chosen as much for their personalities as for their skills. “They wouldn’t send Australians if they were the aggressive type.”

Bob returned after two years of service in Japan in 1948. It was a long journey back to the dusty township of White Cliffs where he settled down on his soldier’s block of 54,000 acres. Marriage followed and eventually he built up grazing property to 200,000 acres.

Of the war, he stills remembers fondly that moment when he and the other Australian troops climbed on to the truck to leave Hiroshima and return home. A little Japanese girl came tearing around and saw him taking his seat and called out “Sayonara, Ume-san”. Goodbye, Mr Horse. It was an emotional moment and Bob says it shows the ability of humans to reach across to each other in spite of their differences. 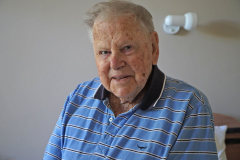