The Second World War changed Australia forever. It was a time of transformation for the nation socially, politically and economically and it radically transformed the lives of its citizens.

In 1940 Clifford Parker was a single young clerk working for the Department of Agriculture in Sydney. By 1943 Cliff had become “Dirk” and was leading an anti-aircraft gun crew protecting Allied positions in the Pacific from Japanese fighters. 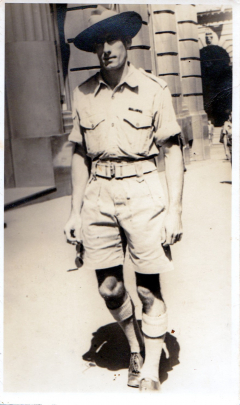 Cliff’s time in the services began with conscription into the Citizens Military Force (CMF), a militia aimed at defending Australia’s home soil. It was also here he met his future wife Joan to whom he would be married for 72 years.

His brother had already left to join the fighting and by 1942 was a prisoner-of-war (POW) of the Japanese. The May 1942 attack on Sydney Harbour by Japanese midget submarines heightened national tensions and on 16 December 1942 Cliff enlisted in the Australian Imperial Force’s 9th Division.

He was assigned to the 53rd Anti-Aircraft Regiment as a Bombardier and sent for training to Port Kembla. It was a long six months of setting up and dismantling guns, identifying targets and practice-firing.

“I also spent three months on the top of the Harbour Bridge Pylon on gun duty.”

Another three months of jungle war training followed in the tropical rainforest at Canungra, Queensland south of Brisbane and inland from the Gold Coast. Cliff notes that, “These conditions were far worse than what we eventually experienced in New Guinea and the Pacific Islands.”

The extensive training regime included live ammunition and simulated combat with tanks, machine-gun fire and soldiers leaping in and out of trenches. A number of men suffered a range of injuries.

It was here Cliff’s interest in the early Dutch explorer Dirk Hartog who landed in WA prompted the nickname Dirk.

They were now based outside Redcliffe, Brisbane, and had become very restless

“The troops were bored. They started taking pineapples from nearby plantations and we had to try and keep the men active so they were given boring jobs like painting stones white.”

As Cliff read the situation, US General MacArthur did not welcome the Australian forces in the Pacific campaign and there was a period of “nine tedious months waiting to be called into action.” Australia's General Blamey insisted the troops were ready and had every right to be involved, given the Japanese proximity to Australia.

Cliff’s regiment soon joined the 9th Division just back from the Middle East and sailed for New Guinea. He struggled with severe seasickness the whole journey. When they arrived at Buna at the end of the protracted fierce fighting, “You could smell the bodies of the Japanese hanging from the trees. The dog tag troop was moving around, looking for bodies in dense, swampy bush and would take the bodies away.”

Many of the troops sent to New Guinea also became sick from malaria, scrub typhus, tapeworms and any number of other tropical bugs.

“I wasn’t frightened of the bombs but it was swampy and there was a debilitating fungus you’d get from it.”

Not only were the US forces well-equipped with weaponry but they also brought a “mash” that cured the fungus.

Cliff became the de facto leader of the 16-strong ack-ack crew at only 22 when the sergeant went on extended compassionate leave. Mostly all older than Cliff, the crew were an unusual mix of personalities and maintaining discipline and morale was a new challenge for the quiet studious Marrickville boy. While they worked well as a team, they lost contact after the war with most of the crew returning to distant parts of Australia.

Japanese air attacks were frequent around Buna but the anti-aircraft guns kept them at bay. Cliff remembers the ack-ack guns would fire solidly for periods of two minutes at a time to keep the Zeros and other Japanese fighter planes from coming in low and taking out the jetty, supply ships and fuel dump. It was grim work and the noise was overwhelming.

“Every ack-ack fellow is a ‘deafie’. I became profoundly deaf.” 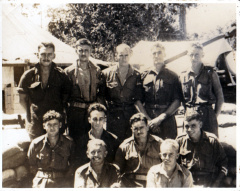 After 15 months in New Guinea and with Japanese forces in the area neutralised, Cliff and his anti-aircraft regiment returned to Brisbane. Leave was short and soon they were on a freighter headed for Morotai Island. It was a staging post for Borneo and the oil-rich island of Tarakan which the Allies needed badly.

Cliff’s unit had an anxious wait offshore of Tarakan as the Japanese fought to keep possession of the island. After several days the Australians landed and set up their guns “as shells continued to whistle overhead.”

“I was bloody frightened and we all were.”

The airstrips were soon repaired with large metal plates shipped in by the Americans with the aim of Tarakan Island becoming the major airbase for attacks on Japanese bases and ultimately Japan. It was a harrowing experience. 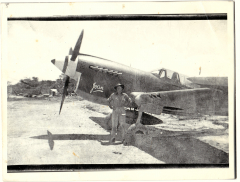 It was here that Corporal Parker heard the news of the Japanese surrender from the Americans. Celebrations were in order. The gun crew opened all the beers that they had had planes flying in from Darwin bring in, in return for ornaments made from crashed planes.

“The first thing everybody knew was we’d be seeing our wives and families.”

Cliff’s crew remained on Tarakan defending the airstrip until late 1945. In that time, ever the student, Cliff learnt about village life, studied Indonesian and read from cover-to-cover all the American magazines which Joan sent from Australia.

His return to Australia was anti-climactic. The gun crew travelled back on the British aircraft carrier HMS Glory which rocked badly in the water because it lacked ballast in the way of planes and fuel. Cliff lost a lot of weight from seasickness so it was just as well there was no fanfare for him when he disembarked in Brisbane. It was the same thing getting off the train in Sydney.

“It didn’t matter. It was still magnificent being home. The first thing I did was have a schooner of beer.”

Cliff soon married Joan and returned to his work at the Department of Agriculture and settled into a life reassuringly free of tropical disease, gunfire and fear. 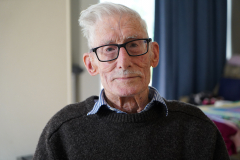