For Colin Watego joining the army was about continuing his Aboriginal/ Torres Strait Islander family's proud tradition of military service to the country. 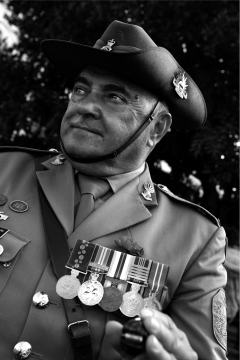 Colin grew up in a big family of six children whose people are the Bundjalung mob on the Northern Rivers District NSW. Wategos Beach in Byron Bay takes its name from the Watego family.

Aware of his family history, Colin found himself at Brisbane's annual agricultural show, the Ekka, talking to one of the soldiers at the Army Reserve stand. He and his next youngest brother Neil were captivated by the jungle greens uniform, the description of training and duties and of course "the toys" on display and the soldier gave them a letter to take to the recruitment office.

It was 1974 and Col was already 21. By this stage he'd worked in a bank and now was running a local squash court in line with another long time Watego family passion. His wife Noela played in the Premier League, her brother played at a national level and Col’s love of squash later carried through to the ADF.

Col was looking for new experiences and he and his brother took their Enlistment Letter to the local Kelvin Grove Barracks. But in their confusion about the barracks layout, the two Watego brothers went to the Artillery 5 Field Regiment Orderly Room, not the Infantry building.

This began Col's long career as a gunner. While he served in many postings during his 43-year career, he never strayed far from “The Regiment”.

"In the artillery world once you're a gunner, you're always a gunner."

The two Watego brothers were naturals and from a group of about 40 recruits, Col came first, and Neil came second. 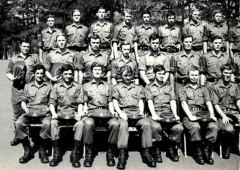 Colin Watego and his class of recruits. (Colin sits on the bottom row, second from the left)

During his marching-out parade whilst being presented with the “Best Recruit Award”, he recalls: "Dad and Mum were there along with my wife Noela and our son Col Junior, and from the Parade Ground I heard him call out Daddy to me. It made me feel very proud."

"Once I started down that track, I knew it was a niche that I loved."

In 1976 as a highly regarded Bombardier, he deployed on exercise “North Star” to England attached to 108 Field Battery 4 Field Regiment, A Regular Artillery Battery.

In 1983, Col had achieved the rank of Warrant Officer Class Two. Initially serving as the Battery Guide, he was eventually appointed as the Battery Sergeant Major of 13 Field Battery RAA.

He was persuaded by a mate he'd trained with who'd completed two tours of Vietnam that Col’s future lay in the Regular Army. He joined the Australian Regular Army and was posted to the Airborne Artillery Unit and moved to Sydney's Holsworthy Barracks as a fully qualified Substantive Bombardier.

"Although they knew my previous history, I was enlisted into the Australian Regular Army, as a Bombardier which on reflection I was happy about as the new kid on the block, in a new location”.

During the next two decades Col would serve as an instructor at several postings including the Royal Military College Duntroon, culminating in the position as the Drill Sergeant of Long Tan Company.

As a Warrant Officer Class Two, Col was privileged to be selected for the Master Gunner’s Course in Canada in 1994. Posted with his family, he conducted training and research in weapon systems prior to working with the Canadian Armed Forces and visiting military bases in Canada and the US.

In 1999 now as the Battery Sergeant Major of ‘A’ Field Battery, Col Watego deployed to East Timor with 'A' Field Battery, as part of the Australian effort to ensure the new country's transition to independence.

Ensuring that “A” Battery were prepared for mobilization, Battle Preparation conducted included Infantry training revision, the co-ordination and transportation of the Battery’s six Gun-tractors (vehicles), 6 x Field-Guns, and 5 x light vehicles to Darwin.

However, nothing prepared Col for the shocking experience of life there:

"Dili was still burning when we arrived in Timor. The pain I saw in the faces of the east-Timorese people was overwhelming. We immediately commenced developing the security of Dili-Command by establishing sentry-points, checkpoints, roadblocks, conducting patrols and providing Ready Re-Action Force (RRF).”

The gun tractors-trucks Col negotiated to bring over was one of their early successes. 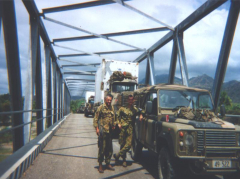 They provided quick mobilisation for the RRF, were invaluable as Troop Carriers to deploy to other areas in Timor, were utilized to move military supplies, and even transported toys and a Christmas Tree at Christmas time.”

Whilst investigating war crimes and working with the NGOs providing medical assistance, food and building materials to the local villagers, Col and his troops provided security to CIVPOL officers who weren't permitted to carry weapons.

Exhuming, examining, recording, and bagging the bodies of those executed, and then returning their remains to their loved ones was traumatic but it did give families the opportunity to conduct a respectful funeral and provide closure.

"There was always an element of an ever-present conflict, but when we were approached by the nuns to help the kids from the Balide Convent School at Christmas, we welcomed the opportunity; especially as we were away from our families and loved ones. Each Section from the Battery adopted a class of approximately 50 children, which culminated in a very special day where the children received gifts (with assistance from World Vision), and they performed traditional dance wearing traditional dress”.

Col rates as one of his Service highlights his appointment as the Regimental Sergeant Major of 8/12 Medium Regiment wearing the same Colour Patch as his father wore when he served as a Gunner in WW2.

Another milestone was his appointment as Corps Regimental Sergeant Major (RSM) of the Royal Regiment of Australian Artillery (RAA), and the RSM of the Defence Police Training Centre (DPTC).

Col is adamant that discrimination during his service was not something he had to confront.

"I honestly can't remember it ever being an issue for me personally. However, the reality is that until everyone looks at everyone else through a prism of mutual respect, every organization at every level, irrespective of their size, will be dealing with this horrendous social issue. I have seen a lot of changes over the years and respectfully pay tribute to our Defence leaders at the highest levels, for their commitment to create equal opportunities for our First Nations Peoples."

Col also insists on paying tribute to the “Balugahn" or “Warrior Spirit” of all the people he served with in the services, black or white.

From 2009, working with Defence Indigenous Affairs until he eventually retired from the ADF in 2018, he was extremely honoured to help in designing, developing, and delivering sponsored career pathways for Aboriginal and Torres Strait Islander people to join the services and for many to follow in the footprints of their ancestors.

During the period 2012 to 2016 a series of Ceremonial events occurred that Col was involved in which were part of the process of reconciliation, Col represented his first nations people with seven others at the first Indigenous Military Ceremony at Anzac Cove, Gallipoli in 2015; the same year he was presented with the Federation Star. 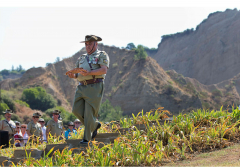 This followed on from his appointment as the Indigenous Recruitment Officer for the Australian Defence Force in 2009. 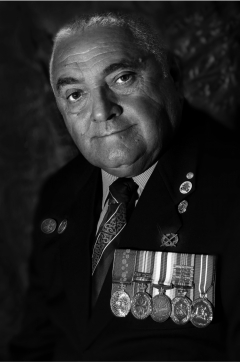 Warrant Officer Watego may have retired from the Defence Force, but he is still on active duty as a mentor and consultant to Indigenous people, especially youth around the country. He has since set up the To Reach Your Potential (TRYP) Programs to foster the foundational life-skills, leadership, culture, and employability skills of young Indigenous and non-Indigenous peoples.

"We encourage them to find their “Balugahn Warrior Spirit”. It's not about aggression. It's about help and a hope for the future. When I joined over 40 years ago, I joined the Australian Defence force - not the Australian Attack Force. I am so honoured to have served".