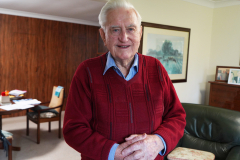 David remembers well the night he was put in charge of a captured Japanese soldier. It was in New Guinea and his unit had been sent out with strict instructions to find an enemy soldier they could interrogate about Japanese troop positions.

David has many memories of the war but this was the worst experience of his active service.  It was the unit's third patrol for the day and they were all exhausted by the time they found "this poor bloke with shellshock."

“I tied him up and I talked to him in Pidgin English which he seemed to understand and I gave him a cigarette, then another, then next morning a back-up patrol came by and I got him some tobacco and he was thankful.”

On that trip Corporal David Trist ended up with a banner that the soldier had been carrying and he hung on to it for years after the war had ended. Years later the Mayor of Penrith heard about the pennant and organised to restore it to the Shinto shrine from which it had come.

“Blow me down, next thing the head priest came to Australia and we organised a dinner. He had brought a gift package and inside that amongst other things was a packet of cigarettes for me.”

It was a thank you from the Japanese for the soldier he’d looked after all those years before and not coincidentally the durries were the ‘Peace’ brand cigarettes. 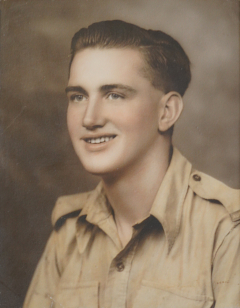 He had enlisted in the Australian Imperial Force in December 1943, aged 18.

“I wanted to keep my country safe but also follow my father who was a WWI veteran.”

After training, he was deployed to Darling Harbour wharves with the 18th Battalion (dubbed by some the 'Young Soldiers' Battalion') to help load ammunition onto ships heading north where the conflict was raging across the Pacific.

It was at this time the famous Cowra Breakout occurred and the young soldier was sent to help transport the recaptured POWs to the Hay internment camp.

David had already been training in the Queanbeyan Volunteer Defence Corps as an under age soldier. The VDC was an Australian version of Britain's Home Guard and it included commando training, the guarding of various critical Canberra facilities and he says, "I learned how to throw hand grenades."

So by the time his 58/59th Battalion shipped north in 1944 he felt confident and ready for anything. But, he didn’t contend with the conditions in New Guinea and it wasn’t really the fighting that got to him.

“I was sick for a long time with skin diseases. When the war ended they had to send me to hospital for six weeks to get over a skin disease. I’d lost a bit of weight and ended up in a major hospital on Bougainville.”

Bougainville was where David saw the most action. The fighting was tough going. "If we were attacking a Japanese position, there were plenty of bullets flying around and you were lucky they didn't hit you."

It was relentless and the soldiers got very little sleep. When they were on patrol at night the watch was two hours on and four hours off and they slept in narrow or ‘slit’ trenches dug with a small shovel to give them some protection.

“There was a lot of grenade throwing. It was better at night than shooting because shooting would draw attention to where the gunman was whereas a grenade wouldn't.”

Other tense encounters included frontal attacks on enemy positions while under artillery fire - "both theirs and ours." One time they found themselves being strafed in the jungle by a New Zealand Air Force Corsair fighter. 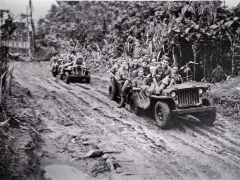 David's early training came in handy, especially learning with hand grenades. "It enabled me to throw a Mills hand grenade 30 or 40 yards out into the jungle." David was also listed as a marksman which meant he earnt an additional six pence per day.

"One occasion, I think we counted at least a hundred shells coming into a small position from the Japanese. It got a bit nerve wracking, but we faced up to it. "

Another memento David brought home was one of the leaflets dropped by the RAAF across Japanese territory. It was directed at Japanese soldiers and written in both Japanese and Pidgin English trying to convince them to stop fighting. As far as David recalls, there was little or no success although they still served a purpose with the locals no doubt using them to roll cigarettes.

News of the Japanese surrender came through a radio in a Matilda tank that the troops took shelter behind during the fighting.  Not only would the Japanese bullets bounce off the tank's thick steel shell, but the radio, tuned to the ABC, would provide day-to-day coverage of the fighting, including news of the atomic bombing of Hiroshima and Nagasaki.

"We were pretty exhausted. I think many of us had the skin diseases and very much unable to walk well. And we were just so glad. The position where we were was literally covered with water and we didn't call out and shout and enjoy. We just accepted. This was good. "

After six weeks in hospital recovering from fungal infections to his skin and legs, Corporal Trist returned to his unit which was now engaged in the eight-month process of collecting 250,000 Japanese troops who had surrendered. They were spread all around the Southwest Pacific, some in POW camps in places like the Solomon Islands. They were sent first to Rabaul then shipped back to Japan.

Finally in mid 1946 David and his unit were transported on the HMAS Katoomba back to Sydney where he took himself into the city to get a haircut and his first steak in 18 months. It was a welcome change to hard biscuits and tinned bully beef cooked over a paraffin stove which was the staple when on patrol. 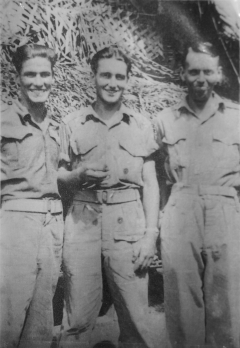