The images of Australian soldiers in World War II are etched in our national consciousness. They’re on the frontline in El Alamein or propping each other up in the jungle of New Guinea. 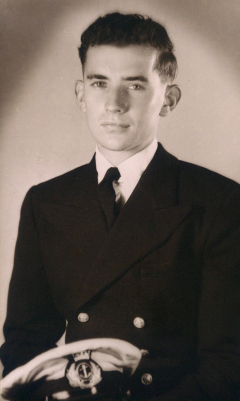 Then there are the millions of Australians who made their contributions in ways we could never imagine. In the final years of the war Don Kennedy spent 17 long months at sea in the Merchant Navy helping transport precious oil to fuel the Allied tanks, ships and planes.

In February 1944 at the age of 16 the boy from Manly was not eligible for the services even though he agonised over what he could do and how he could be of service to the nation. Reluctantly his dad slipped him a piece of paper with an address down on the Sydney docks. When Don fronted up there he met with the Chief Officer of the Norwegian tanker, MT Seirstad. The interview took less than two minutes. He was asked why he wanted to go to sea. As young Don ummed and aahed, the Norwegian instructed him to come back with his stuff.

Two days later he was cruising out through the Heads on the Seirstad with no idea where it was going. That set the pace for the next year and a half. 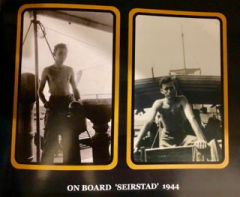 Don Kennedy on board Seirstad, 1944

It was the first of many voyages to exotic countries the young Sydney boy would never have dreamt of going to. "I went to so many other places, too numerous to mention."

It all sounds innocent enough except that enemy ships, especially submarines, targeted supply ships mostly, not naval vessels. Most of the oil was pre-sold to Allied Armies, Navies and Air Forces. Without fuel, their campaigns to resist German and Japanese expansionism would grind to a quick halt.

Plying the support routes across the oceans was risky business. Close to 4,000 Allied merchant ships were sunk by enemy action in the six-year period between 1939 and 1945 with a casualty rate of one in eight crew. In the armed services it was one in 28.

“Almost 40,000 allied merchant seamen lost their lives as a direct result of enemy action during WWII.”

Many supply ships were rigged with guns to defend themselves against attack. The Norwegian tanker had four anti-aircraft guns and a four-inch naval gun. Soon after joining the crew, the now 17-year-old deck boy was told to take over gun duties and given a three-minute demonstration on gun operation. Some of the Norwegian crew then teasingly referred to him as “Kannon Kommander Kennedy”. Luckily he only had to fire the gun once in action.

With all this in mind, Don Kennedy insists, “Don’t call me a hero.”

Don soon learnt Norwegian and became a trusted member of the Norwegian crew. “We used to call them the Nords. It was quite sad they couldn't get back home because the Germans had taken their country.”

On the next trip they sailed from Fremantle across the Indian Ocean and up the Persian Gulf to what was then called Mesopotamia (now Iran). The ship was filled with oil and then transported to Cape Town, South Africa. Onboard the ship there could be no leave and crew were required to work at least eight hours a day every day of the week. Even when it returned to Australia Don's visits to his homeland were restricted to the usual turnaround for a port call of no more than 36 hours.

Keeping watch on board at night was a nerve-wracking experience for crew. All ships as per standard operating procedure navigated without any lights at all on the outside to avoid detection by the enemy. Don adds, “You couldn’t even smoke outside on the deck at night.”

It was April 1945 before Don finally left the ship. It docked in Brisbane and he caught the train back to Sydney. He was only back for two weeks before he saw a sign saying Seaman Wanted. Next thing he knew he was on a plane to Melbourne to join a US Army Transport Corps ship. The USAT Point San Pedro was desperate for crew and desperate to set sail. No sooner had Don put his kit down in the cabin than the ship was moving.

The ship was headed for New Guinea with stores and ammunition for the Australian forces. It was on that trip that news came over the radio: the war was over. The only difference it made to operations was that once they reached the American base Subic Bay in Manila in late 1945, all the guns were removed.

The US freighter reached China where it was to be sold. Even though he was now officially part of the US Army Transportation Corps, Don found himself stranded in Shanghai and it would be a couple of months on full pay before he could find a passage to Manila. This was in July 1946.

After the war, Don was issued a Discharge from the United States Army. 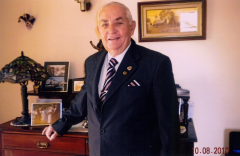 As a result of campaigning by Don Kennedy and others, the Allied Forces eventually recognised the wartime efforts of Merchant Navy seamen and the British Government issued Imperial Campaign Medals identical to those awarded to the other services. Australia’s Returned Soldiers League extended full membership to merchant seaman with overseas wartime operation service and the Australian Government granted the same benefits as all other ex-service personnel.

Even though Don Kennedy wasn’t trained to fight in the war or even acknowledged as a member of the services at the time, the commitment he and others made in the merchant navy was no less significant.

“I tell people I was 17 months in the war. There was only half an inch of metal between you and the sea if a torpedo struck the ship."

On Anzac Day every year, Don is proud to wear the 12 campaign medals he was awarded. Don was also granted the Order of Australia (OAM) for his over 50 years of volunteering.