Dorothy “Topsy” Turvey enlisted in the army two weeks after her 18th birthday, in the middle of World War II. Dorothy was from Newcastle and her first visit to Sydney was to join up. 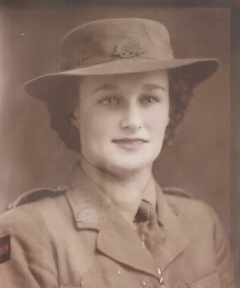 “I’m an Aussie and I wanted to be part of it. My dad was in Gallipoli. I had a brother in the army and my sister was a nurse.

We had six weeks’ training at Ingleburn Army Camp. I learnt how to use a rifle. They were learning from us too. They wanted to see how our brains worked. What we were capable of. Then they sent you where they thought you were suited.

I was sent to the Coastal Artillery and my first assignment was the Cape Banks Army Station at La Perouse. I spent nine months at battery headquarters in the underground plotting room.

We had an enormous plotting table that showed the outline of the coast. We would get information from the Army outposts to chart the course of ships on the plotting table. We had to make sure they were our ships and not Japanese ships."

“Before I joined the army, Japanese submarines came into Sydney Harbour and sank a ship killing 21 men.

“The Japanese were also flying air raids over Darwin. We had 9.2 inch guns in Darwin but the Japanese came in under the trajectory of the guns.”

“We slept in long huts with metal lockers by the bedside. There were no showers in the huts. It was roughing it a bit, but who cares.

“We had to keep our huts neat and tidy. I remember one day when this rather proper English officer was inspecting our hut. The room was spotless but he was trying to catch us out. He opened a locker and a packet of Modess pads fell out. He was so embarrassed. That taught him not to open women’s lockers.”

“I made a lot of friends in the Coastal Artillery. They were caring friends. We had monthly reunions in town until they died. We were always there for each other.” 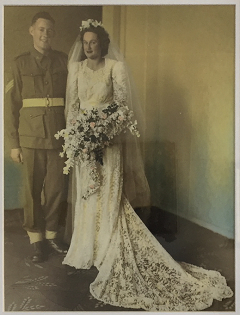 “I met my husband during the last year of the war. We were engaged after six weeks and we got married before the end of the war. The wedding dress I wore had been worn three times before and I was told to pass it on after my wedding. My family pooled their coupons for a going away outfit.”

“For the whole period of the war, I wore my uniform. Even at the dances at La Perouse, we wore our service uniforms.”

“Three months before the end of the war, I was transferred to the Ordnance in Scone. I was looking after uniforms.”

“We slept in tents, and one night our tent blew right off. We slept the rest of the night in the rec hut.”

Dorothy was back in Sydney working in Ordnance when Prime Minister Ben Chifley announced the end of World War II on Wednesday 15 August 1945.

“The day the war ended it was ‘hip hip hooray’. I remember going into the city with my friends. We went berserk. People were dancing in the city. Sydney went mad

How stupid war is, but you have to protect your country and your families. If it happened again, I would have to join up again. At 95, I would join up to protect my country, family, loved ones.” 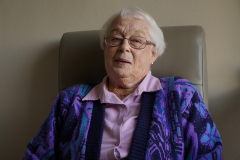