Edna Simpson, or “Teddy” as she’s always been known, is a Grenfell girl through and through. Grenfell is a picturesque town in NSW’s central west that Teddy felt was worth fighting for and one of the first times she had to leave was when World War II was in full swing. The country was under attack and Teddy feared it was at risk of falling to the Japanese. 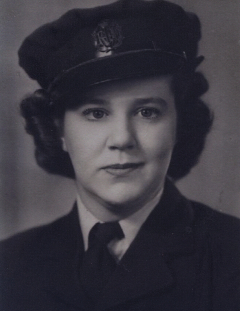 She enlisted on 3 June 1943 at age 19. She had wanted to join up a year earlier but was talked out of it by her parents who convinced her to wait. She admits she was a bit naïve but she was anxious to play her part.

Teddy was also motivated by members of her family who'd been affected. Her brother-in-law was a prisoner-of-war in Japan and it would be four years before her sister received a letter from him. Reports about Australian POWs detained by the Japanese were infrequent and sketchy and indicated the prisoners' treatment was inhumane and many were dying.

Another brother-in-law plus her own brother were already in the services and Teddy was ready to do whatever she could.

In the meantime Teddy had been helping the war effort in other ways.

"I was the first girl to work in a bank and normally you didn't work in a bank where you lived. The boys all went off to war and they began to employ girls like me and it was only me and the manager."

Teddy describes the training and new routine she underwent as very hard. She had joined the Women's Auxiliary Australian Air Force (WAAAF) and even though she was on shift work and sometimes working through the night, she still had to be on the drill field at 6am every morning and often felt very tired.

"I was in Postal though I had started in the Ionospheric Section of Signals. We added up masses and masses of columns of figures in the Melbourne Victoria Barracks."

Teddy re-mustered to 4 Postal Unit in Sydney, then she was one of a select group of women who were posted to Townsville.

"There were not many girls up there and a lots of the boys went to Darwin from Townsville but we were one happy family up there." 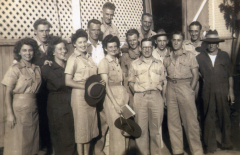 The thing that sticks out in her mind is the mateship. In the services she and the other women worked closely together and naturally long-lasting friendships developed.

"Sadly, only one friend is still alive now from the Townsville group - but there were so many more."

Teddy was recognised for her strong skills and sent on her own to 6SD Dubbo temporarily to start a new mail courier service which meant instructing civilian workers how the system worked. Dubbo was coincidentally where she was born and so this was a particularly meaningful trip for her.

It was in Townsville at 11am one morning while working through the day's post that she heard the news of the Japanese surrender. Like most Australians Teddy felt from the progress Allied Forces had been making in the Pacific that peace could not be far off.

"When we heard we knocked off for the day to celebrate. All the boys came out and out came the drink."

According to Teddy, there was relief and excitement, but on returning to the barracks she quietly reflected on how she would soon be able to return to Grenfell and her family. 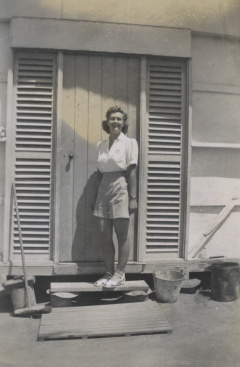 When Teddy arrived at Sydney Showground to undergo the discharge process, her brother-in-law from Japan was waiting there.

"He'd been fed up a bit in the two weeks after he'd lost five stone while in Japan but he was still very weak. He had a lot of flashbacks and it was a long while before he talked about his experiences."

Her sister was now able to get married and since she had been running the Grenfell Post Office there was the perfect opportunity for Teddy to take over her job.

Teddy laughs, "It was a lot easier than getting up at 6am."