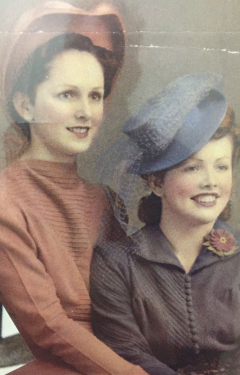 Eugenie Allen sitting on the right

Eugenie’s fiancé spent two years and seven months in the Middle East. He bought gold for her wedding ring at an Arab stall in Cairo. He had it made with a pattern of roses and the words, ‘Until the day,’ which he signed at the bottom of all his letters.

“I was a hairdresser when we married, but I wanted to do something different. I wanted to learn. I enlisted in the Army, but I wasn’t patriotic I just wanted a change. Even though I was married, I was expected to live at home with my parents. I was angry at the whole situation. I felt like my life was on hold. I wanted the war over. You had to have your husband’s permission to join the Army. I wanted to go into Transport because they had much nicer uniforms, but my husband had taught me Morse code and I could do 20 words a minute. I applied for Signals and was sent to Balcombe Army Camp in Victoria.”

“There weren’t many messages to send and there wasn’t much work for women to do. It was boring sitting with a bunch of girls just fiddling, so I volunteered to learn switchboard. “We travelled to the middle of Melbourne and were taught by the girls at Colonial Sugar Refinery and Adelaide Steamship Company. It was one of the highest points of the war for me, learning the switch at Adelaide Steamship. I had a while to wait before travelling back to camp, so they taught me to type too.”

Eugenie’s first real Army job, working the switchboard at the Army base in Bandiana, earned her a place on the Bandiana War Memorial. “My name is the second name on the list with Allen being high in the alphabet.”

Eugenie went from the switchboard at the Army base in Bandiana to bustling Victoria Barracks in Sydney.

“People would call to speak to Colonel So-and-So and I’d say, ‘Hold the line’ and patch them through,” said Eugenie. “The important Officers had their own lines out.”

“Sometimes I was told, ‘What a lovely courteous person there was on the board.’”

“When I went to Victoria Barracks, we all had to do basic training and learn how to go through a house that was gassed,” said Eugenie. “You went into the house and they released the gas. You were told to remove your mask and not put your hands to your eyes. The place was in darkness.”

Many years after World War II, and after her children had grown up, Eugenie was able to use her switchboard and typing skills for a number of organisations throughout Sydney including King George Hospital, Mona Vale Hospital, Blackfriars Correspondence School and Channel 10. 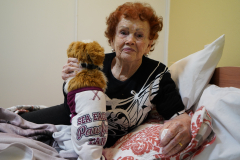