Eunice Clarke enlisted in the Army in July 1944 to escape her mundane life in the country. “I was helping Dad on the farm. My brother was away in the Army and my sister-in-law was staying with us. One Sunday night we were having an argument and, as she was a guest in the house of course she was right. I wanted to get away.”

“The next day I saw an ad in the Sydney Morning Herald calling for anyone who was interested in joining the services. I filled in the application form, put it in an envelope, and sent it off. I told no one.”

“Within a fortnight, I got a reply. They wanted me to come to Victoria Barracks in Sydney for an appointment. When I told my Mum, she was absolutely amazed.”

Eunice travelled from her home in Pullabooka outside of Forbes to Sydney, and with her mother and father’s permission was accepted into the Army. “There were lots of other girls there. I was 18 and most of them were older than me. There were plenty of girls to make friends with. They took our particulars, gave us needles for this and that, and then we were off on the bus to Ingleburn Army Camp.”

“They asked us what trade we wanted and I chose driving. After a month’s training at Ingleburn, I was chosen to go to Victoria for more training. I spent six weeks at the transport school in Melbourne and then six weeks at Monegeetta. We practiced driving 30,000 weight trucks on mountain roads with a cliff on one side and a steep drop on the other.

“I was a country girl and I’d driven around the paddocks since I was 13. Mum was a town girl and didn’t drive. I used to drive her to the shop about 12 miles away, but I didn’t have a licence before I joined the Army. We didn’t have much money to spare to pay for a licence.”

After completing driver training in Victoria, Eunice returned to Sydney where she drove a 30,000 weight International truck. “I mostly had to take Lieutenants. Sometimes I took Captains, but they usually travelled in polished-up Ford cars. I had to keep the truck neat and tidy. Sometimes I had to get underneath the truck to see what was making it knock. Sometimes I had to pick up goods for the company.” 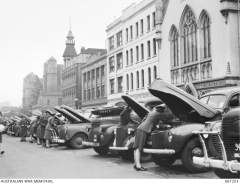 “We stayed out at Moorebank near Liverpool. There was a men’s and a women’s camp. You had to wear your cap and you had to salute the Officers. When you came in late you had to provide a password.”

“I enjoyed driving, the further I had to drive the better I liked it.”

During her time as a driver, Eunice had a rare opportunity. “I had to transport someone to the airfield and I had a couple of hours to wait around. This was the time when Prince Henry, the Duke of Gloucester, was our Governor-General.  He had his own private plane and it was at the airfield at that time.” “I got shown through the Governor-General’s plane and I got to sit on the seats. They were very well stuffed and had pretty upholstery.” 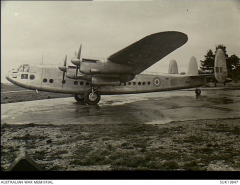 The Duke of Gloucester's plane

Eunice was in Monegeetta testing tyres on Ford and Chevrolet utes when peace was declared in August 1945.

Eunice was not discharged from the Army till January 1946. “After the war ended, I worked in the canteen and in the orderly room. It was pretty boring after getting out on the road.”

In June 1946, Eunice married her boyfriend from before the war, Erwin Clarke. Eunice went on to run the Pullabooka Post Office while Erwin did mechanical work.