Frederick Lewis enlisted in the Royal Australian Navy during World War II, beginning a career in the services that would span 35 years. “I felt it was my duty. I had a love of the Navy and a strong sense of patriotism,” said Frederick. “I pledged to faithfully serve my Queen and country.”

Frederick completed his initial training and was shore based in New Guinea nearing the end of the Pacific War.

“I was not involved in combat as such. We were flushing out stragglers from the main conflict. Japanese numbers were small by then and although there was an element of danger there was no fear of being killed at that time. We picked up the stragglers to bring them by ship to the mainland. We held the Japanese prisoners on the open deck at the stern of the ship with sentries guarding them day and night. We ended up with about 15 prisoners. They were exposed to the elements and bedded down roughly on the quarterdeck with blankets and pillows. They had to endure this for about three or four months. The Japanese were our enemies at the time and we had rather a dislike for them. To us the Japanese seemed like a reasonably cruel people. We felt some hatred towards them because of the atrocities of war, but we didn’t harm them. We certainly had the prisoners under control on the ship and rather than harm them we developed some sympathy towards them.”

Frederick remembers the day the war ended. “We were expecting it at the time. The news was received in radio signals and printed on a signal form. The word went out to ‘splice the mainbrace’ which is a Navy order to issue the crew alcohol – beer in the Australian Navy and rum in the Royal Navy.”

During his lengthy service in the Royal Australian Navy, Frederick Lewis was involved in regular deployments to South East Asia on exercises, flag showing visits, and in shows of force involving shore bombardments against communist forces during the Malayan Emergency and the Vietnam War.

Frederick rose to the rank of Commander before he retired from the Navy in 1980.

“The Navy is a 24-hour-a-day job. I counted it as my duty, but I enjoyed immensely what I was doing. I was at sea for most of the time and there was never a dull moment. There is always something to do on a ship, during wartime and at peace. “ 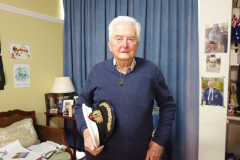