In the quiet town of Dundee, New South Wales, there is a small, ornately decorated Roll of Honor. 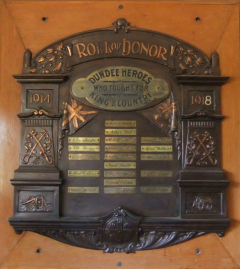 The Roll of Honor dedicated to the 'Dundee Heroes who fought for King and Country'.

The memorial bears nineteen names – enlistees from the town, some who returned battle-scarred, others who never returned at all. A brass dedication plate, though worn with age, still proudly proclaims these men as the ‘Dundee Heroes who fought for King & Country’.

Among them is Private Seth Thomas who was fatally wounded by a sniper bullet at Villers Bretonneux on 11 May 1918. He was just 21 years old.

Yet Seth was not from the region. Instead he was born and raised in Allora, located in another state, almost 200km away from the sleepy town of Dundee.

So how did a man from Queensland with seemingly no connection to the area appear on not one but two regional war memorials in New South Wales?

The only clue laid buried deep within his service record. Official communique sent forth from the AIF Headquarters in London detailing his death, forwarded in response to an appeal for information they had received from Dundee resident Miss Lily Crouch. The seventeen year old only received the news almost six months after Seth’s passing.

Her original letter is now lost to time, or perhaps still lies buried within the archives awaiting discovery. The connection between the two thus remains at present a mystery. Yet Seth’s inclusion on two war memorials far from home appear connected to Lily, giving her a space to grieve, a physical remembrance of the man who could never return. 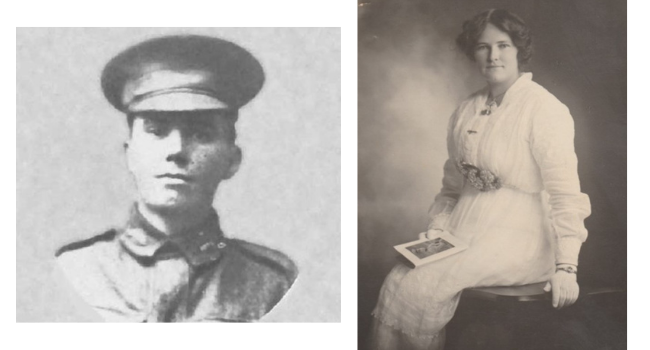 The story of Seth and Lily represent just one among the countless names on war memorials across the state. Stories that are only now being uncovered through the tireless research of dedicated contributors like historian Graham Wilson OAM for the New South Wales War Memorials Register.

For Graham, his interest in war memorials has been a lifetime affiliation. 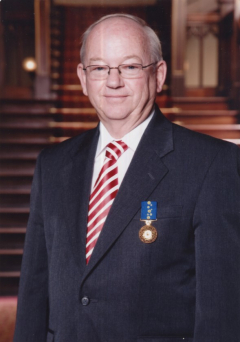 Graham Wilson receiving the Order of Australia Medal for his heritage work in Armidale, 2008

He recalls with a laugh a time in which he asked his wife whether he was obsessed with war memorials, her response: ‘well yes, you could say that.’ It is an interest which he can trace back to his early childhood, cycling around the Hawkesbury area and discovering the local memorials that dotted the landscape. During his teaching career, he often found that they were the key to unlocking students’ interest in history, a bridge that linked the remote battlefields of France and Gallipoli to home. But it was his later work as a heritage consultant that truly impressed upon him the value in protecting such significant remnants of the past. It was while in this role that Graham witnessed the significant shift in the heritage movement over the last three decades as people increasingly seek to delve beyond the physical structure into the stories that such remnants can reveal.

The New South Wales War Memorials Register has since become an invaluable repository for such stories, protecting both them and the memorials themselves from being lost to the ravages of time. Over the past several years, Graham has made a remarkable contribution to the Register, researching over 560 war memorials. The work has led him into communities scattered across the state, working with an array of people, helping them to discover stories of service from their local areas. This has unquestionably been the highlight of his experience and Graham reflected that ‘you very quickly realise you don’t come in as an expert…you go into that community and say how can I help, or did you realise this funding was available?’

He has witnessed firsthand the enduring legacy these memorials hold in the way they continue to unite communities decades on, and the appreciation expressed particularly in country areas for the assistance rendered remains a key motivation in his ongoing contribution to the Register. It is a feeling which he hopes will galvanise more people to become involved with the Register, remarking that ‘you end up being on a high because you realise your skills can be used to help people.’ Given the burgeoning interest among younger generations in Anzac Day and the World Wars, Graham also hopes that more schools will become involved in recording their local war memorials.

‘I think this is one of the reasons why I have been doing this [going to different communities] in the hopes that people will see [that] yes you can get a lot of enjoyment, a lot of pleasure out of it, by recording war memorials.’

With a keen eye for detail, Graham has traced the changing face of memorialisation in Australia. From the turn away from traditional structures such as obelisks and canons, most common around the turn of the twentieth century, to the growing appearance of Australiana symbols during the interwar years as a post-colonial identity was formed around the figure of the Australian Digger. The Second World War marked the rise of utilitarian memorials such as swimming pools and parklands, while in recent decades sculptures have become a prominent form of commemoration. 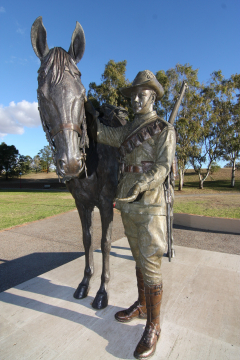 Of the hundreds of memorials Graham has studied, however, two stand foremost in his mind. The first was the Tamworth Waler Memorial. Erected in 2005, the sculpture depicts a Light Horseman in his final moments with the horse he was unable to bring home. ‘You can imagine the link between this soldier who had to deal with this and destroy this animal who had helped him for so long,’ Graham remarked.

Yet it was the Advance Australia Fair sculpture in Chris Cunningham Park, Tweed Heads, that had the greatest impression upon Graham. 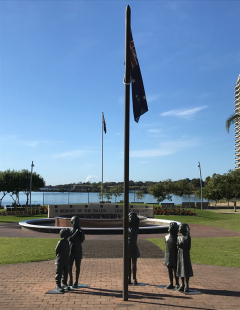 The sculpture depicts five children cast in bronze gazing up at the Australian flag, a nearby plaque identifying them as ‘the children of today’ paying tribute to the men and women who served their country.

Yet as Graham looked upon these small figures, he recalled: ‘I immediately thought of the children looking up at the flagpole, thinking when would dad come home? Or when would our older brother come home?’

‘An honour roll just shows names, but when you see it depicted in sculpture, you begin to realise that these are people, or these are animals, or these are children involved.’

It is something Graham can relate to personally with fleeting yet vivid recollections from the war years: ‘I can remember a stranger coming to our house in this blue outfit. It was my dad coming back from Darwin. He was in the Air Force and I used to hide behind my mother’s dress because of this stranger’. ‘As a child,’ Graham went on, ‘you don’t understand it of course, but you do know the vivid either khaki outfits or the blue outfits of the Air Force, they sit in your mind you know. They didn’t talk about war, but they had a strong presence’.

The impact of war upon the family and community at large has become a prominent point of interest in Graham’s research. ‘When we look at the soldiers’ name,’ he recurringly emphasises, ‘it’s not just a name.’ Indeed, memorials can often mark the starting point through which a far greater insight into the emotional toll of war upon the Australian populace can be discovered.

A point that became profoundly evident while Graham was researching soldiers from New England who died in service:

‘I’ve gone back into their files and you see things happening, like for instance, quite often the death of the son will drive a couple apart rather than bring them closer, and quite often I’d say in reference to the father, the husband, he couldn’t cope with it, he walked away and when the medals were given out…they would only be given to the father. So the female had to write back to the army and say I’m sorry, I have not seen my husband for many years. So they had this double personal tragedy, coping with the death and then later on coping with trying to convince the authorities that they were entitled to the medals.’

Often it was mothers who had lost one, two or even three sons in the First World War who were asked to unveil memorials. One example being the rural town of Gilgai from which every eligible man left to serve. In 1923, the town’s inhabitants gathered despite the sleet and driving rain to watch Henrietta Woodford unveil the local memorial.[1] Of the three sons Henrietta had bid farewell to during the war, only one returned.

One in almost five Australian soldiers who deployed overseas in the First World War were never brought home. In many cases, their bodies were never recovered and their families were left to wonder endlessly what had happened to their loved ones. For these families memorials held enormous significance – a surrogate gravesite, an enduring marker to ensure that those who served were not forgotten. A legacy that is now being safeguarded by the work of contributors to the Register.

‘I just feel that the recording of war memorials is so important to the strength of our community, to realise that through history we need to understand the stories of people, to realise that certain events like wars have a really significant part to play in our social history.’

The NSW War Memorials Register marks an exciting new phase. An opportunity for people across the state to contribute their own stories and research, to uncover the real individuals behind the names. The work of contributors like Graham Wilson not only aids in the preservation of war memorials for future generations but also pieces together a much larger story that delves deeper than the official record, revealing the broader experiences of a state – and indeed a nation – at war.

Related stories and links
Get involved with the Register