Helen was born in Dee Why but grew up in Kings Vale, a tiny hamlet between Young and Harden in country NSW. She enlisted at 18 and served until the end of World War II.

“We enlisted to see what was going on – we were curious. There was nothing much going on in country towns and the war presented great advantages for women to work. I went on to live an interesting life.”

Helen received a lot of training for her role and was based at Point Cook near Adelaide in South Australia learning to be a tele-printer operator. It was an electromechanical device used to send and receive typed messages via a variety of communications channels in both point-to-point and point-to-multi-point configurations.

“It was like a very early type of computer and was advanced for that era,” Helen explains.

Following training, Helen was posted to the Richmond Royal Australian Air Force (RAAF) base in NSW as part of the Eastern Area Headquarters Signals. There was one signals operator attached to every shift.

“My job involved typing messages in plain, code and language using a tele-printer. In the RAAF, signals related mainly to aircraft movements which were recorded on a chalkboard to follow the passage of an aircraft in the area. The wireless also registered weather reports.

It was very important as a tele-printer operator to make no mistakes. I remember someone sent me an article about how a signal had gone out about 10 Air Crews when it was about Air Schools! You had to be very accurate.”

Helen then worked at the civilian airfield at Mascot with two other women. They lived in barracks in tin huts which could get as hot as 46 degrees Celsius.

“We were monitoring US aircraft movements and they would just fly in and land and didn’t circle overhead. We recorded their movements through the airspace as they crossed into areas such as Goulburn and Wagga Wagga. They were carrying Prisoners of War coming back to Australia following their release at the end of the war.”

Helen has vivid memories of the war ending in 1945.

“We had just come off night shift and got caught up in the crowd in the city and got swept along. You can’t explain the joy – so relieved – so incredible. I even saw the ‘dancing man’ in the street.”

After the war, Helen returned home to Kings Vale and experienced a couple of tough years before things settled down.

“I was ill for two years. We were short of food and I had appendicitis and a damaged back from the trucks. While we were away there had been bad droughts and bushfires,” she explains.

“It is important to remember the war 75 years on because of what Australia was before and what it had become – no one knew much from a distance but we had been places and were a real country now. Every sinew had been stretched in the war effort.” 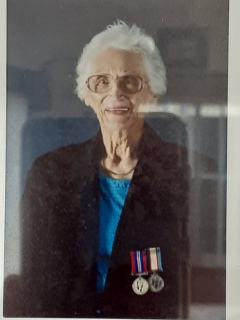 Helen Clark was awarded the War Medal 1939-45 and the Australia Service Medal 1939-45 for her service during WWII. She is a member of the Sussex Inlet RSL sub-Branch.