In recent years the Indian-Australian community in NSW has been behind a number of initiatives  to promote awareness of the close Indian and Australian military association. Since 2007 a contingent of Sikh veterans and their families have marched in the Sydney Anzac Day march to remember Indian soldiers who fought in or alongside Australian forces. 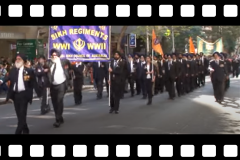 In 2018 the Australia India Cenotaph Committee, a project of the Hindu Council of Australia erected the ANZAC Jawan Cenotaph in Cherrybrook to ‘commemorate the service and sacrifice made by Australian Soldiers and Military Personnel of Indian heritage who served in the Australian Imperial Force in World War 1’.

Australia’s recruitment practices during the First World War applied the White Australia policy. The Defence Act regulations expressly banned recruitment in time of war of ‘Persons who are not substantially of European origin or descent’. That prohibition was only slightly relaxed in 1917 in the face of heavy losses amongst its existing forces and the need to expand their recruitment. The Defence Act was then amended to allow that ‘half-casts (a term now considered highly offensive) could enlist if the examining medical officer was convinced that one of the parents of the recruit was of European origin.’ [1]

The war service documentation for one of the Indian-Australian enlistees, Linna Sing, gives an illustration of how the discriminatory practices could be applied. While he was initially accepted as an enlistee the service record notes that he was later discharged because he was ‘not of substantially European descent’[2]. The records of the other Indian enlistees evidence a wide variety of First World War Australian service experiences. Two of the enlistees would be killed in action in Belgium. (Read more about the 12 Indian-Australians who enlisted for the AIF during the First World War).

The ANZAC Jawan Memorial also remembers  approximately 16,000 Indian national troops who fought alongside the Allied forces at Gallipoli. The Indian contingent included an infantry brigade, a mountain military brigade, medical units and a large contingent of mule drivers that served the critical role of delivering supplies to all the Allied troops. The story of the Australian Private Simpson who ferried wounded men down from the Gallipoli front line by donkey until he was killed is legendary in Australia. What is less known is that the donkeys that Simpson used were looked after by the Indian mule drivers and that Simpson lived in the muleteers camp.

The Indian troops were involved in many of the key Allied actions of Gallipoli including the battles of Gully Ravine, Gully Spur and Sari Bair and around 1,500 of the soldiers died during the campaign, yet the story of the Indian contribution had, until recently, been largely forgotten in Australia. 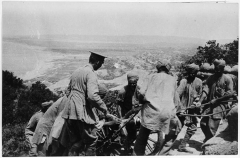 Much of the newly appreciated detail about the Australian-Indian military connection has come from the research of the Australian military historian Peter Stanley.  Stanley explains that the Indian role in Gallipoli was initially well acknowledged, but over time, as Australia’s memory of Gallipoli transformed into a legend of the birth of this nation’s consciousness, Australia’s re-telling of the Gallipoli story began to exclude the role of other countries[3]. The same point is made by the United Services Institute of India researcher, Rana Chhina, who explains that the ‘Campaign at Gallipoli has become almost an exclusive Anzac memory to the exclusion of all else.’[4]

Stanley calls for renewed Australian recognition of all of the other countries that fought at Gallipoli and notes how the experience of fighting side-by-side with the Indian soldiers challenged the racial prejudices that many of the ANZAC troops carried into the war.

‘It was the closest contact that many of the Australians and New Zealanders would have had with men of colour. They had come deeply prejudiced against coloured people. But when they met them on Gallipoli… and shared danger, shared trenches, shared rations together, inevitably those prejudices fell away and they were able to communicate and meet as equals.’[5]

Rana Chhina similarly details how the Anzacs came to respect the fighting qualities of the Indian troops, They actually got along very well. The Anzacs recognised the fact that the Indians were professional fighting men and they acknowledged them for it.[6]

Indian troops have continued to serve alongside Anzac forces in Australia’s military campaigns and peace missions since the First World War. The ANZAC Jawan inscription ends by noting that the shared military history ‘is an enduring sign of the strong alliance between both countries with the common bond of friendship and democracy.’

A commemorative service is held each year at the Cenotaph to commemorate Anzac Day.

Indian Sikh soldiers watching Turkish prisoners in a compound, Gallipoli, Turkey, August 7, 1915. The compound was just across a gully from the rear headquarters of the 1st Australian Division.