Since aircraft became a fundamental arm in our nation's defence, young men and women have dreamt of doing their part from the sky. At age 17, Jack Van Emden was no different.

Jack's home in Maroubra was walking distance from Mascot Airport and the 16 year old watchmaker's apprentice would often pass a sign on the gate advertising flying lessons for £16. Now this doesn't seem like much money but it was many times his father's weekly pay and far more than the Van Emdens could afford.

Ever since Australia had joined the war in September 1939 Jack dreamt of learning to fly in the Air Force and he soon put in his application. To his disappointment, recruiters were less interested in his ambitions to be a pilot than in his mechanical skills. "When they heard I was an apprentice in watchmaking, they convinced me to consider training as an instrument maker." At least it was in the Air Force. He would be close to the action and doing something he enjoyed since he had always been mechanical as a kid.

Still only 17, he had to wait another six months but on the day he turned 18 he enlisted. It was Monday, 7th October, 1940. When he told his mother that night what he'd done her reaction was one of shock since there'd been little or no discussion beforehand.

Training was at 1 School of Technical Training (1STT) in Ultimo and he sailed through the six month course with ease and was posted to the 6th Squadron in Richmond, working on Lockheed Hudson twin engine bombers.

His hankering for flying was cured about this time when they took him up and sat him next to the gun turret which in this aircraft was a thin gap in the fuselage with no covering. "I nearly got sucked out and it was that cold I thought I was going to freeze to death."

After various postings in Australia, including Geraldton WA which was an eight day trip from Sydney, Jack was sent to a RAAF base in Milne Bay, New Guinea, where he worked on aircraft for two years. Later he was posted to Goodenough Island just off the north coast of New Guinea which he describes as a paradise. "It was absolutely perfect with a conical mountain in the middle and an icy cold creek coming down which we'd swim and catch crays in."

This is not exactly what you expect to hear about during the height of the Pacific Campaign and indeed there were regular Japanese attacks from the air since Goodenough Island had become a major base for Allied operations in the latter stages of the war.

For Jack and the other Australians based there many of the dangers came from "friendly fire".

"During a combined US/Australian landing on New Britain Island, one of the US ships fired on an Australian Beaufort carrying high ranking Officers, thinking it was a Japanese bomber. When the plane landed you could see the bullet holes but no one was hurt."

A few weeks later, the Australians were over at the American encampment watching recent newsreels from the US and one featured the same aircraft that had been attacked. As the Yanks cheered the shooting of what they thought was a Japanese plane, the Aussie pilot in the audience stood up and said "That was me flying that plane and it was one of ours." 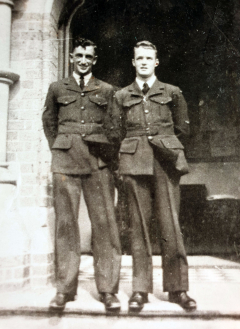 Jack (left) and his mate

In a more personal incident, Jack was badly burnt in the 'amenities' when a spark set off flammable liquid which had been poured into the pit to keep the mosquitoes down.

He was recognised for his careful work repairing and maintaining damaged aircraft and was promoted firstly to Leading Aircraftsman (LAC), then to Corporal. Because of the hectic nature of the Pacific Campaign and the difficulty of maintaining clear communications, Jack didn't know about the second promotion.

While waiting for his flight back to Sydney in Townsville, he ignored the calls for 'Corporal' Van Emden to board the flight, thinking it must be someone else. The plane left without him and during the subsequent four-day trip down south on a packed train, he wondered how many Van Emdens there might be in Townsville.  It was only later at Wagga Wagga that he was told he'd been made a corporal many months beforehand.

Jack's wife Sheila was also in the air force where she served as a flight mechanic. Like a number of young women mechanics, she had grown up on a farm and could repair and operate machinery.  Jack and Sheila met when they were posted to 8EFTS at Narrandera and later they re-met at the Flying Training School in Wagga Wagga. It's not hard to imagine other couples meeting and enjoying life-long romances based on their common experiences during the war. 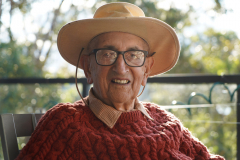