Jean Nysen came from a navy family. Yet when World War II broke out and Australia joined the fight against Germany and Japan, the 19 year old headed inland away from the sea and spent most of her wartime career in Canberra.

“I’d had a most enjoyable career as a commercial artist and thought the world was fine and then the war broke out in Europe and when Japan came into it I decided I should do something about it.” 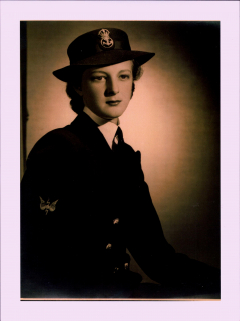 The decisive moment for the young Sydney woman was the sinking of HMAS Sydney, the pride of the Australian Navy, in November 1941 and the complete loss of the ship's 645 crew. It shocked her and it shocked the whole nation. As a young, independent, forward-thinking woman, Jean Nysen contemplated how best she could serve her country. “If you were called up, you were likely to end up making bullets or something like that.”

Jean’s father was a foundation member of the Royal Australian Navy and one of the first adopters of wireless telegraphy. As a child, Jean would accompany him to Harman Wireless Station in Canberra, the navy’s communications and logistics facility, “and so it was a familiar background.”

To work in signals and be posted there, it was clear Jean would need to acquire one particular skill above all others:

“I only wanted to do Morse code, I loved Morse code and I found that it was being taught in Sydney by a very clever woman.”

A legend in the field, Mrs Mackenzie or “Mrs Mac” as she was referred to by almost everyone, was the first female electrical engineer anyone had ever heard of.  She had a shop in the city supplying equipment to electrical engineers and Jean’s father was a regular customer.

Mrs Mac saw the future clearly and started a school for teaching women Morse code because she knew they would be very good at it and they would be needed as the war progressed.  Even now Jean Nysen still feels she and the other young women who studied under Mrs Mac owed her a great debt. She studied hard until she was sending Morse code at 22 words per minute.

Billy Hughes was the Minister for Navy and he was resistant to woman joining the service. Under pressure from Mrs Mac herself and given the shortage of good staff in signals, Hughes agreed to a trial of young women personally selected by Mrs Mac and Jean was one of the first 100 women posted to Harman Station.

It was a success and Mrs Mac was asked to supply more women telegraphists. Eventually there were 200 at the Wireless Station, all on a continuous rotating watch.

“It was four hours on, and six hours off, right through the day and night. There were four separate watch groups and because there were so many, we almost didn’t know the others on the different watches.”

Jean says it was a fascinating experience, watching all those clever loyal women going about their work, keeping contact with RAN ships all around the world. Through contact with stations in Whitehall, London, Colombo, Sri Lanka and other bases, they were able to locate RAN warships with a new accuracy and communicate with them.

“You had one earphone with one frequency and another with a different frequency. It was very well organised. You were either communicating with Darwin or Singapore and the Dutch East Indies, you were in touch with the world!” 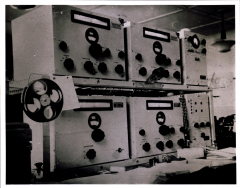 They lived at close quarters in houses built for sailors and their families previously posted to Canberra and “we developed strong bonds with each other.”

“Mrs Mac was right that women were very good at that work and it was so enjoyable.”

Bit by bit the young women were recruited into new roles, some learning Japanese Morse code, others becoming involved into intelligence.

After two years the navy decided the women’s unit at Harman had to be like other services and have promotions, “but we resisted because we got on very well with each other and the men and were very cooperative.”

In the end the service asked for people to volunteer to become officers and only one put their hand up “because we liked it as it was.”

For a short time, Jean was posted back to the Potts Point station, Sydney, because they desperately needed a wireless operator. It was exciting seeing what was going on in the Harbour with the ships coming and going, but for Jean the work was boring compared to the buzz of Harman Station and soon she was back there.

Battle after battle, the Allied Forces were dominating the Japanese in the Pacific but in July 1945 Telegraphist Nysen had to leave because her mother was not well.

“Then they dropped the atom bombs on Japan and we knew it was over. We felt relief because we wanted to get back to normal.”

The navy would always be in Jean’s blood and she married a Dutch naval officer and after her son graduated he took up a position in a naval research laboratory.

Jean Nysen stayed in constant contact with many of the women after the war, their strong friendships developed through their close collaboration at Harman Station.

“People do tend to cooperate at times like that and you realise that people work and trust each more in times of crisis.”