Joan Gregor was a telephonist at Taubman’s paint factory when she enlisted in the Women’s Royal Australian Navy Service, the WRANS.

Joan said she felt the need to assist in defending Australia. She elected to be a telephonist and was posted to the Balmoral Naval Depot.

“I was familiar with the equipment, plugging in cords and connecting people that way. I enjoyed it very much. I met up with girls from other states, and everyone was very, very friendly." 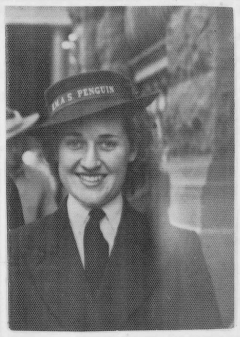 There were two girls from Sydney and interstate girls from Western Australia and Queensland. I was required to live at the Balmoral Naval Base because telephonists did shift work over 24 hours – four hours on and four hours off. We wore uniforms while on duty. A khaki skirt and blouse in summer with a khaki hat, and a navy serge skirt and blazer in winter with a navy hat.”

“Sydney put on dances in the Town Hall for service people. We all loved going to those.”

“It didn’t have the feeling of wartime at work, but we saw the results of war. Balmoral had a big hospital and a recruiting station. We volunteered to visit the men in hospital. We saw Servicemen coming back with injuries and nervous breakdowns.”

“We also had drama amongst ourselves. The fiancé of one our telephonists was sent overseas and was killed. We were supports for her and helped her get on with life. We learned what real life was about.”

“Teenagers led pretty protected lives then, mostly living at home with their mothers and fathers, brothers and sisters. I learned how the other girls lived. I lived a life of luxury compared to some of them. There were girls who came from broken homes who were acting as parents for their siblings.”

Joan was sent to Tasmania for the last few months of the war. She was in Tasmania when peace was declared.

“We didn’t take part in any celebrations. It was all very quiet. I was demobilised in Tasmania and returned to Sydney and took up life at home again.”

“I went back to Taubman’s but life was a little different. A lot of girls like me who had lived protected lives had more freedom. People understood that we had learned independence in the services. We had been making our own decisions about everything really, and people realised that we had grown up.”

“My time with WRANS made me aware of the world around me. I’m very grateful for the experience.”