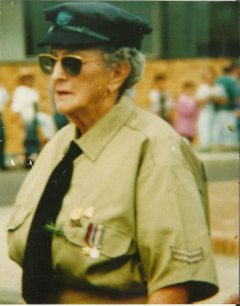 Joyce Halloran was born and raised in Barraba, a small town in the New England Region of NSW. Her father Keith had been in the charge of Beersheba in the First World War but when World War II was raging, Joyce’s father and brother were busy running the family sheep farm. Joyce thought that she “had better go and do her bit for the war effort”.

In 1942, 21-year-old Joyce enlisted in the Women’s Auxiliary Air Force. One of her first jobs was folding parachutes at the RAAF Base Wagga. It was a monotonous job and Joyce worried that she would make a mistake with the chutes. She was glad when she was posted to the medical group at Jervis Bay.

The naval college had been relocated before the war, and the RAAF 2nd Military Rehabilitation Unit was using the site to care for airmen who were convalescing from sickness and injuries.

“The poor men were very maimed. They were sent home legless, armless, earless. We weren’t nurses, but we were encouraged to mix with the men and to help them get back to normal life. It was very sad.”

“I worked in a canteen in the Officer’s mess. It was like a little shop with washing powder, ash trays and so on. We were staying in the sailors’ quarterdeck. It was a lovely building, sparsely furnished but comfortable and right beside the sea. For a country lass from Barraba it was like luxury living.”

“I stayed there till the war ended. I was proud to be doing my little bit for the war. Everything was new to me and it taught me a lot. I learnt how to mix with other people and I think it had an effect on my whole life.” 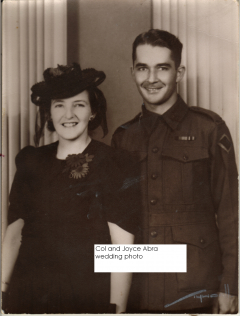 Joyce was at Jervis Bay when they got word that the war had ended. “We were waiting for it. We knew it was coming. It was a lovely feeling and I danced for joy.”

Joyce’s husband Col Abra was a POW in Changi. Col was a Medical Orderly and was put to work in the cholera ward on the Burma Railway. He was credited with keeping many POWs alive. Joyce said that she “felt she was part of trying to bring him home.” 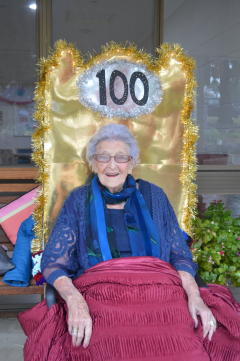