At the start of World War II, Kathleen Carlon was an only child living with her widowed mother in Wagga Wagga and working in a local pharmacy. She was 17-years-old and her mother was worried Kathleen would be conscripted into the Land Army and sent to work on some distant farm.

“My mother was frightened I’d be sent to the country, so she encouraged me to volunteer for the Women’s Australian National Service in Wagga,” said Kathleen. “We called it the WANS or the Widows and Neglected Spinsters.”

Kathleen worked in the pharmacy during the week and on weekends and Tuesday evenings she trained with the WANS doing first aid, cookery and marching.

“Mr Loth from the Ambulance Station in Johnson Street taught us first aid. Mrs Higgins, an English woman, was our commander and she taught us to how to march. Once a week, we would go to the drill hall for marching practice. I loved marching. I loved the music and the routines. We had a smart uniform with a badge on the cap.”

Wagga Wagga was a major centre for Australian servicemen in World War II. The Royal Australian Air Force had a base at Forest Hill and the Australian Army had the Kapooka Camp. Kapooka functioned as a training camp for engineers and as a transit camp for regular soldiers.

“On weekends the WANS would provide the Army with ‘a bit of home cooking’,” said Kathleen. “We used the big kitchen at Edmondson’s department store. I was behind the counter handing out the meals.”

Kathleen said, “Wagga was full of airmen, even Americans. We thought they were beautiful in their special uniforms.”

“We had plenty of dances throughout the war at the New Moon Gardens and Wonderland. The New Moon was open air and Wonderland had two halls, one for old-fashioned dancing and one for modern.”

“We enjoyed the war, but we were also delirious when the war ended. We didn’t think it was ever going to end.” 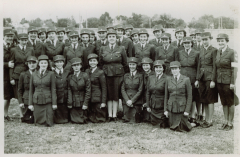