The mobilisation of a nation at war entails hardship and sacrifice for both servicemen and women on active duty overseas and those serving on the home front.  Australian women like Kathleen Smith (then Hill) signed up as early as they could, eager to do whatever they could so men could be released to help the global fight against fascism.

Part of her decision to enlist was the memory of a young man who was also training to be an accountant at the flour milling business she worked at in the small town of Mooroopna, near Shepparton. He had enlisted, trained as a navigator and joined Bomber Command in Britain but was shot down and killed in an early flight over Germany.

For Kathleen, "This war had become very real to me."

She was not yet 21 when she decided to join up in June 1942 and therefore needed her parents' consent. Her father had been a World War I Digger and didn't hesitate to approve her enlistment and the young trainee accountant was soon training to be part of the Women's Auxiliary Australian Air Force. 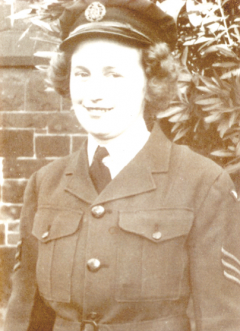 It was mid-winter in Frankston, Victoria, next to Flinders Naval Base with southerly winds blowing straight up from the Antarctic. There were 24 young women housed in each tin hut and their first task on arriving was to find straw with which to stuff a hessian bag as a mattress to sleep on. No sheets just grey woollen blankets and among the uniforms provided to them were men's overalls which the women described as "giggle-suits". As for the great coats, these came in handy as an extra layer of warmth at night on beds.

"We learned to do everything at the double, to queue for meals, line up for needles. After endless hours of drilling, route marches and lectures and dos and don'ts, we were ready for anything."

Now a general clerk, Private Hill was given postings in various Melbourne offices as the headquarters expanded. Then after an early promotion to Sergeant she was put in charge of a section that organised the posting of air ground staff to different units.

One of the lesser known examples of the generosity of Australians in these difficult times were the offers of in-home Christmas dinners for servicemen and servicewomen located away from their families and that's how Kathleen spent two Christmases.

"They were just lovely people wanting to help."

She recalls vividly the cyclone that swept through Australia when America posted troops here after Pearl Harbour. According to a book she later read, as many as 15,000 Australian women became American war brides.

One of these included the wife of an airman Kathleen worked with. The airman was devastated to learn his wife had left him "for a Yank" but no end of support - including extended leave - from Kathleen and others in her unit could help him win her back.

A new air wing was established in Deniliquin in NSW, the Advanced Flying and Refresher Unit, and this was Sergeant Hill's next posting. She was in charge of the Orderley Room, supporting the advanced training of pilots, many of whom had already been on active service and were being tested for ability and safety. The training including aerobatics to help develop pilots' skills to evade enemy fire and there was a high failure rate which caused a lot of disappointment as "no pilot liked to be grounded."

While Kathleen was far from the fighting, "I knew people who were killed during the war" and so she looked eagerly forward to the day when it would stop. It was what drove her commitment to serving her country and explained why so many put up with the day-to-day difficulties of life then. At least at Deniliquin, she notes, the "ablutions had doors on each toilet and shower" even though she remembers still having to fill a sack with straw to put on her bed.

Among some of her more unusual duties as a Sergeant was doing a bed check with a torch at 10pm most nights to see who was in bed and who wasn't. 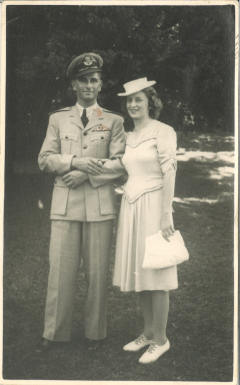 One of the flying instructors, John Strauss, was a "pretty chatty fellow" who insisted on introducing Kathleen to another instructor and even arranged for the two to meet at a dance. His name was Noel Smith. Within a year Kathleen and Noel were married and were together for 63 years.

Another positive experience during her three years in the WAAAF was her friendship with the other women in her unit who she remained in close contact with throughout her life. 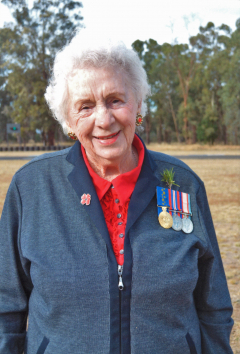