If they made a movie about Margaret Ferrier’s time in the services, she would have to be played by 40’s Hollywood screen queen Katherine Hepburn. There’s the intelligence, the cheekiness and the boldness.

In explaining why she enlisted, Margaret says:

Of course I wanted to make a difference, but there was the excitement of being part of it.  And I secretly wanted to fly.

For Margaret getting behind the controls of a plane was not a simple matter of ticking a box at the recruitment office since women were hardly if ever let near the controls of any military aircraft. 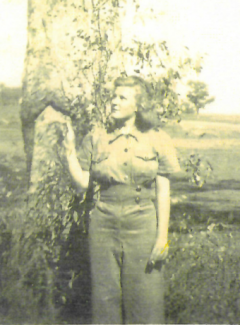 Coming from an established farming family in Roma, Queensland, Margaret was quick to find work in the essential industry sector. It was 1943 and more and more men were being sent to join the fighting overseas, leaving work that was previously their domain open to women.

On arriving in Sydney Margaret found work in a factory, manufacturing the famous vintage aircraft Tiger Moths. This suited Margaret who came from a farm and had good mechanical skills. But it wasn’t enough.

The work was repetitive and dull and Margaret banded together with some other women and decided to leave.  “I wanted to do something more active.” The women marched straight down to the recruitment centre in Martin Place, Sydney and signed up. It was 15 July 1943.

Margaret was still only 17 at the time but she put her age up by six months.

My mother was aghast – she thought I was much too young.

She was posted to Adelaide as a Clerk but saw an opportunity on hearing a flight school back in NSW was in need of mechanics. That’s where growing up on a farm came in handy. Soon Flight Mechanic Ferrier of the Royal Australian Air Force was servicing training aircraft at No. 10 Elementary Flying Training School (TENEFTS), Temora, NSW. Chief among her tasks was turning the propeller to get the plane started.

The de Havilland Tiger Moths that pilots trained on had two seats, one in front of the other, each with its own controls, that is, a wooden stick that steered the plane. Because of the strenuous nature of the training, the school had removed the co-pilot’s stick so that pilots wouldn’t be tempted to let others have a go at flying. Part of the training was learning aerobatics, ie loops, spins and drops which was the kind of excitement Margaret was after.

The pilots were good mates with Margaret and knew how much she wanted to fly. It was the head pilot who offered to take her for a joy ride. Up they went and after making sure Margaret was properly strapped in, he turned the Tiger Moth upside down. Then he righted the aircraft, passed her the second joystick and suddenly Margaret was flying the plane.

Over a period of time she flew regularly and learnt how to perform various aerobatic tricks. As satisfying as this was, she knew there was never any possibility during her service of becoming an accredited pilot.

Temora is only kilometres from Cowra and its internment camp full of Japanese, and Aircraftwoman Ferrier was there at the time of the famous ‘Cowra Breakout’ when 1000 inmates escaped into the surrounding countryside and there was widespread fear the escapees might reach Temora.

The RAAF was strict about interactions between men and women on the base and so every night at 8pm the women were locked in their huts. In spite of that many would still slip out to go for a drive or meet up with friends in town.

Margaret Ferrier served her country for almost three years during World War II. In the post-war era after working in various jobs including as a flight steward (as close as she could get to flying again), she studied and worked as a nurse until retirement. It was a long life of service to her country and community. 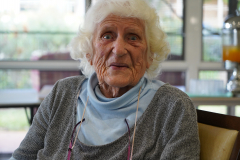