One way of looking at war and joining the Army, Navy or Air Force is that it’s a job. When that happens after a prolonged period of high unemployment, the offer of paid work is all the more important.

This was Marjorie Chapman’s situation. It was 1944 and World War II had been raging for five long years. She was 26 and work was thin on the ground in the small town of Karuah. She was working as a housekeeper and so the call to join up was too enticing.

“Basically there wasn't a lot of work and many other people were joining.”

The Women’s Auxiliary Australian Air Force was formed in the early years of the war to help fill the urgent need for skilled and semi-skilled signals and maintenance personnel. Most of the eligible men had been sent overseas and finally the Australian Government had agreed after a lot of difficult discussion to allow women to fill many of the roles previously the sole domain of men.

Approximately 27,000 women enlisted in the WAAAF between 15 March 1941 and 24 August 1945 and the success of the WAAAF was soon followed by the formation of other women's services such as The Australian Women's Army Service (AWAS) and the Women's Royal Australian Naval Service (WRANS). 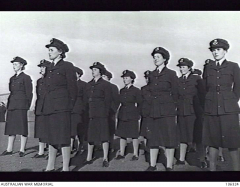 Graduates of the RAAF and WAAAF University School of Administration on parade. 6 April 1942

Women like Marjorie were welcomed in the WAAAF and were trained in a range of roles and given postings at RAAF bases around the country. In Marjorie’s case she was sent to Laverton in Victoria on Port Phillip Bay. It was the Air Force's third base and is next to Point Cook, the Air Force’s founding base.

The base was dominated by a number of aircraft hangars where most of the maintenance and repair work on planes was carried out. Marjorie worked in the "orderly room", the administrative office of the sprawling compound. Her tasks included the day-to-day general office duties of filing, filling out forms, invoicing and re-addressing letters.

Marjorie had her head down and worked hard to get it all done.

“There was a feeling of doing something for someone else, a feeling that the letters, for example, could have been incredibly important for those people.”

While the work was mundane, it was a harmonious workplace seemingly far from the turmoil across the islands to the north of Australia. “By that stage we weren’t particularly worried about the country being under attack any more.”

The usual routine of a service base was observed and Marjorie remembers having to get up extra early each morning – well before 6am – for drills on the parade ground since there was no accommodation for her on base.

There was her uniform of a navy jacket and skirt and a little pillbox hat. And there was the discipline that came with being in the forces during wartime.

“You had to salute, you had to cross the t’s and dot the i’s, but I never got into trouble.”

Marjorie remembers being billeted with a local family, the Wafts, whose home was often the focal point of weekend recreational activities.  “The Wafts had a big place with tennis courts and during the weekend everyone from the base used to go there, men and women, and play tennis.”

Marjorie describes the people on the base as being a close community. Her overriding memory of the war was the camaraderie. Once the war was over and it was sad to see the Laverton staff disperse across the country which only made future contact and re-unions difficult.

Soon after the war was over, Marjorie returned to Karuah where as one of nine children she was expected to contribute to caring for the family.

Marjorie married in 1947. Her future husband Harry was a medic and Lance Corporal in the Army and had been imprisoned by the Japanese in the infamous Changi POW camp in Singapore.

He left a sturdy man but returned emaciated and was often unwell. He suffered the effects of malaria and ongoing attacks and even ended up with tuberculosis. He also had a short fuse which the family put down to his war experience.

Her husband’s accounts of abuse by the Japanese army reflect those of other Australian POWs.

“He said the dysentery was atrocious and said he and the other POWs were so hungry they’d try to catch monkeys for food.”

A shadow hung over Marjorie’s husband although he rarely discussed his wartime experiences.

“He would sit there and cry every Anzac day, having seen all those people die around him.”

Marjorie, now 101, recognises that she and her late husband lived through the best and worst of wartime experiences: the violence, suffering and deprivation, the mateship, the struggle to stop the spread of populism, and the sense of what a nation can achieve when its citizens are united by a common purpose.