Boredom. That’s one reason Maud Street offers for her decision to sign up. She was already playing her part for the war effort as an employee with the Government health service in her native England. But she wanted more. “It was pretty boring. I didn’t have to volunteer, but I decided I’d rather enlist because then you got to choose the service and I chose the Air Force.” 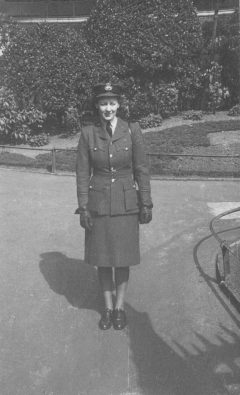 Maud was 19 in 1940. Although the war had barely started, she had wanted to join the Air Force ever since she was 11 and saw those magnificent men in their magnificent machines flying around, showing off their aerobatics, giving adults and kids like Maude joy rides.

Maud had no ambitions to fly even when she heard the desperate call for male and female pilots to bring planes over from the US. “In any case, you had to be at least 5'5' and I was only 5' 4 1/2" and you couldn't leave your shoes on.”

Soon she was a typist in the Royal Air Force and there was a sense of excitement as she moved from one air force station to another. The first posting was Newcastle in England’s north where there were lots of young women like her.

Next she was sent to Salisbury where a new fighter station Middle Wallop was still under construction – they’d completed the men’s quarters but not the women’s and so women were billeted in the marrieds’ quarters.

The station was soon under attack as the Battle of Britain got under way.

The first attack came as a complete surprise. Some of the station’s planes didn’t get off the ground and there was extensive damage and a number of casualties. Maud was the station’s clerk. She was in the office when the attack began and there wasn’t even an air shelter to run to.  Maud and the adjutant ran outside to see what was going on and they saw a German JU-88 fighter coming straight down all guns blazing.

"We rushed back in and the portly Senior Officer scrambled to safety under his desk, leaving no room for me. Bad luck!"

The battles between English and German fighter planes played like a macabre reality-TV show in the skies above, visible for all to see. Maud remembers the veneer of fearlessness among the young as they watched the dramatic air battles and being the target of daily air raids.

"You'd tell yourself, you're young, you're not going to get killed."

With wry humour, Maud notes the poor tactics of the German Luftwaffe at that stage: "They were stupid, they came over at the same time every day and so we got into the lunchroom to make sure we got our lunch first, which was the main meal of the day, and would take it down to the bunker ready for the air raid to start."

For all the bravado, there were great losses among the airmen. "They wouldn't last very long. There were very few seasoned fliers."

During an early attack, she recalls vividly an airman standing alone with a machine gun shooting back up at the attacking planes. Maud remembers that that was when she was struck by the reality of the war. "Inside I was just scared out of my wits."

Camaraderie was strong, with servicemen and women united by a common cause. Difficult living conditions and the Air Force's strict regulations only helped bring them closer.

They were fit and walked and cycled everywhere. The meals were dull but with hardly any sugar and no chocolate or sweets, they at least were able to maintain good health.

"We lived in Nissen huts, with a coal stove in the middle to keep it warm. We'd all get around the stove and make cocoa with condensed milk and as we'd talk, we knitted. Every morning we'd get up and make the bed and keep everything neat and tidy, and the Sergeant would inspect."

During her time in the war, Maud was known by her nickname. Early on, the other women had laughed at the old-fashioned name 'Maud' and decided to call her Gillie.

She was soon promoted to Sergeant, and then undertook officer training.  Later she was transferred to Bomber Command and appointed as the personal assistant to the RAF second in command, Air Vice Marshall Sir Robert Saundby. By this stage she had risen as high as a women could usually go and was ranked a Section Officer (the head of the station).

Maud sees her career in the war as typifying the opportunities that opened for women.

"I think it changed a lot of lives. You had to do as you were told, but you could do what you thought was right and you became very independent. And there was no point in the men telling us what to do, because we could do what they could."

Like many Maud suffered her own personal tragedy when her first husband, a New Zealander she'd married during the early stage of the war, was lost in action on the French coast.

In early 1945 she met an Australian doctor stationed at a nearby base whom she married after her discharge later that year. They moved eventually to Sydney then to Orange where they bought a farm.

"The war experience made you very independent. You could always find a solution to what was worrying you. You had to use your initiative and you consulted people more of your own age, it was great leveller."