Mavis Wheeler is never far from a dictionary.

She's a person who loves words, loves reading, and loves crosswords. So naturally her preference when called on to help stop the spread of fascism in World War II was to use her wits and be part of the electronic communications network that was so critical to Australia's success in the Pacific.

Before enlisting Mavis had a very clear idea of the role she could play. When war broke out, she wanted to prepare herself so she studied Morse code at Fort Street High for over a year so it was second nature. She succeeded and by the time she presented herself to the recruitment office she was able to 'type' in Morse at 25 to 30 words per minute:

"Once I joined the Air Force, I was proficient in it. It was very exciting and I felt I was capable of contributing to war effort" 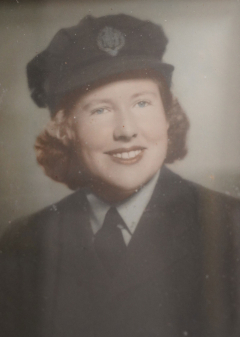 She was a great believer in improving opportunities for women and was supported in this by her mother and father. By the time the war started, Mavis was working for a stockbroking firm. "We wanted to be seen as capable as men of doing many things." More importantly, her experiences during the war in Signals was not only about serving her country but showing that

"...we were the first to do it and it made an impression on many that women could do this."

Because she had already trained in Morse code, Mavis was rushed into active duty and sent to Laverton, Victoria next to the RAAF Williams base and near RAAF Point Cook. Her team was tasked as a "direction finder" and it comprised of six women who worked closely together around the clock as part of the 27,000 strong Women's Auxiliary Australian Air Force (WAAAF).

With her commitment to duty and attention to detail, Mavis was soon promoted to Corporal Wheeler.

Much of the work was top secret and even years later she is uncomfortable saying much about it.

When the war ended, she saw it as an opportunity to travel the world and spent the next seven years working in England as well as exploring Europe and Canada. In England she was disturbed by the devastation, especially in London, and that propelled her eventually back home to Sydney.

Mavis was born in New Zealand but had moved to Sydney when she was three years old and lived in one of the grand old houses in Longueville with a big side garden, orchard and tennis court. Best of all was the outlook where as a teenager Mavis had watched daily as history unfolded before her eyes:

"From the verandah we could see the building of the Sydney Harbour Bridge. You saw the arches coming together and you could see the men crawling over it and hear the steel beams being knocked into place."

Her coming home was joyous. "It was quite an occasion being with my father and my brothers. They all came to the wharf to greet me.” Unlike many women, Mavis refused to follow the narrow path into marriage and a family away from the wartime independence many women had revelled in. She soon found work back in the financial sector and remained working for a stockbroking firm for many years.

There she saw herself as a mentor to generations of younger women who had never enjoyed the unique opportunities that the war offered to Mavis and her peers. 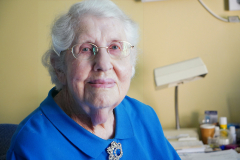