There was no question Michael Hickie was destined for a life at sea, entering the Dartmouth Royal Naval College in England at the tender age of 14 in 1936. “I had read many books about the adventures and life in the Royal Navy and said I would like to join,” Mr Hickie, now 97 and living in northern Sydney, recalls in his memoir, The Mike Hickie Story.

WWII was declared in his final year at the college and he joined his first ship, the battle cruiser HMS Repulse on 1 May, 1940. “It was my first day as a Midshipman. I was seventeen and a half years old.”

What followed were tense operations in the North Sea, the Atlantic and the Arctic where his ship, the HMS Nigeria, sank the German light cruiser, the Bremse in 1941. “It was on a very dark night, before radar had been fitted,” he recalls. “We fired several times at her at point blank range and sank her.”

Having completed his Midshipman’s time, he joined the Submarine Training Base at Blyth in north east England where for the first time the Women’s Royal Naval Service, popularly known as the Wrens, were involved.

After serving in the Mediterranean, he joined HMS Truant at Holy Loch in Scotland where an attractive Wren, Patricia Traunter, caught his eye. “In early January 1944, I had leave due and was able to take two weeks’ leave during which our wedding took place,” he says. The honeymoon was spent in the south of England where Mr Hickie remembers seeing troops massing for the invasion of Normandy. 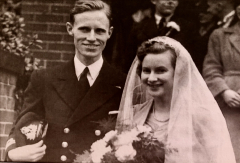 When Michael Hickie and Patricia Traunter got married, January 1944

The birth of son Tim followed at the end of 1944 with Mr Hickie spending 10 days with his wife and baby. He did not see them again until August 1946.

Mr Hickie was serving on the submarine HMS Taciturn in the Java Sea when victory in Europe was declared in 1945, later coming under Japanese torpedo attack near Singapore.

“I saw the bubbles of a torpedo approaching . . . (and) dived the Taciturn to a safe depth. The submarine fired another torpedo at us which we heard through the hull passing overhead.” 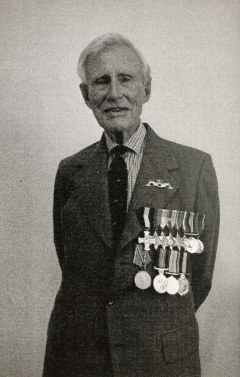 He believes this action contributed to him receiving a Distinguished Service Cross from George VI.

Following the end of the war, Mr Hickie and his crew returned to their base at Fremantle in Western Australia where a victory cruise around Australia and to Hong Kong was organized.

He would go on to make Australia his home, joining the Royal Australian Navy in 1966 and rising to the rank of Lieutenant Commander before finally retiring from naval life in 1983 after a long and distinguished career.