When World War II comes up in discussion as one of the 20th Century’s major events, the Great Depression that preceded it is often overlooked. For Norma Booth and so many other young Australians in the early years of the war, joining the services offered them an exciting alternative to their limited job prospects.

“I was looking for something I could do, I was on the land and I didn't want to do that and this came up and I thought I could do this and help the country.”

She was motivated in part by her father’s service in World War I.  With seven children to fend for, he was also very enterprising, an industrious man who worked a range of jobs every time things slowed on the dairy farm in north Shepparton, Victoria. That way he was able to keep the soldier’s block while so many others walked off. 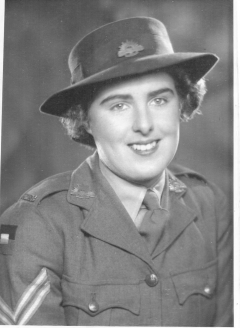 It was July 1942 and Norma was 19 when she noticed an advertisement for 500 people in Signals in the Australian Army. She wasn’t even sure what it involved but it was a perfect fit and by the time the war was over she had ended up with the top job.

Norma recalls being nervous during the recruitment process after she'd put her name down and described her skills and experience. "They called out what you had to do, like the cooks and others and then mine was the last name to be called."

Fortunately she was selected for Signals. For her training, she was sent to one of the Army’s Melbourne offices and was soon working as a Cipher Operator in Signals, 19 Australian Lines of Communications, in the Australian Women’s Army Service. The accommodation for the women in Signals was big tents erected in Fawkner Park, central Melbourne.

As time passed, the young Corporal developed great expertise in her role and was sent around the country substituting for other Ciphers whenever the need arose.

In May 1945 the 400 women of the 19 LofC were posted to Lae on the North Coast of New Guinea. It was unusual for Australian servicewomen to be posted overseas and Norma's group were installed in a series of long huts near the office with 12 people in each hut. Security was high and the women were not allowed to go anywhere except when accompanied by a group by men.  This included walking down to the office building used for Signals at this point which was only three streets away from the huts. 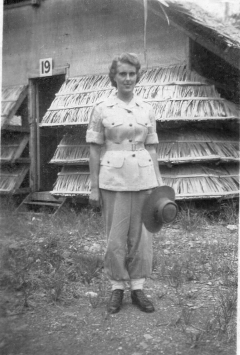 The office had been set up with a range of communications gear including teleprinters and cipher equipment. There was a constant roster of around-the-clock shifts and, "we often worked the night shift and would sleep during the day."

The base had a social dimension as well with different sports that servicemen and women could join but one of Norma's main activities was writing letters to her family back home. That way she could stay in touch with her mother and father and the five other children still on the farm (one brother was already in the Army).

It was here in Lae she met her husband. He was working in the same office as a Signaller. By this stage the fighting had moved on from New Guinea to Borneo and other Pacific islands. The living conditions were now good and it was almost like being back home in rural Shepparton.

"We had cooks and you had a big hut where you ate your meals together and there were certain times when you'd go for your meal, and there was a Sergeants hut. They also had a Q Store where you had the uniforms and clothing."

Many of the women developed life-long friendships during their time there. "I quite enjoyed the army life, I liked the company and we had very nice people." 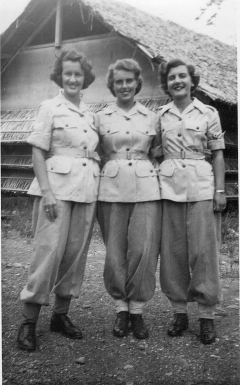 Some people remained in Lae long after the war but Norma knew it was time to come home. By the time she was discharged on 1st April 1947 Norma had risen as far as she could and was now Staff Sergeant Gibbs.

She settled in Sydney where she took up a position in administration with Berlei Limited. As the years have passed, Norma has stayed in contact with many of the other women she served alongside, getting together with them from time to time.

When she thinks back to the war's conclusion, it's always with a sense of profound relief.

"When I heard that the war had ended I was pleased because it would stop the fighting and stop all those men being killed. There were 21 year-olds being killed in huge numbers so it would stop that. They just had to stop the war, it had been going on and on for so long."