The project was led by Professor Mick Dodson – Director of the National Centre for Indigenous Studies (NCIS) who believed the work would give families a chance to tell their stories about war service and the hardships faced when they returned home, such as finding their children had been put into state care and not being entitled to benefits afforded non-indigenous soldiers.

The project research team included researchers from ANU, the Australian Institute of Aboriginal and Torres Strait Islander Studies, the Australian Catholic University, and the University of Newcastle, and a project support team. They visited communities throughout Australia for community Yarn Ups to conduct oral and video recordings with Indigenous defence personnel and/or their families. They also researched national and personal archival records, photos and other materials, and the project culminated in the publication of a compendium style book of essays on involvement in the 20th century conflicts and thematic essays. 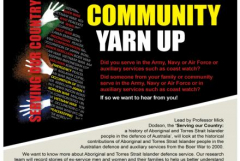 The Community Yarn Ups  (oral/video and photo history recording sessions) were a vital part of the Serving Our Country Project.

Aboriginal and Torres Strait Islander veterans, ex-service and people involved in Defence support roles like the Coast Watch during the Second World War and their relatives shared stories, along with photos and other objects or papers they felt helped with telling their story.

The interviews were structured to allow individuals to tell their story, their way, and these histories helped to present a richer, deeper history of Aboriginal and Torres Strait Islanders service and memories of their involvement, that relying on archives alone could not achieve.