“When war broke out the Government introduced conscription for all males over the age of 18 to serve in the Citizen Military Forces, but one could volunteer for the Navy, Army or Air force, which appealed to me. As it turned out I would never have had the opportunity to see England the way I did if I hadn't joined up.”

Robert was part of 460 Squadron, flying Lancaster bombers. “I treated it as a job. And I was happy to do it. You’re occupied, and you feel you're doing something worthwhile, not being aware of the damage you're doing until you see the photographs taken next day.”

Bombing raids were directed by a master bomber who was flying a Mosquito Bomber. They were very manoeuvrable, very light and flown by very experienced pilots who would drop flares. 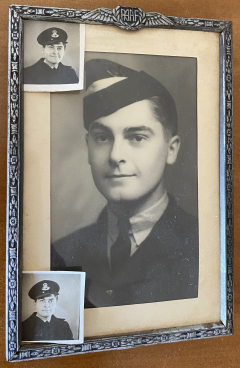 Robert during his time in the Royal Australian Air Force

“We bombed from 18,000 feet at night so could not see the targets. So to overcome this problem, Mosquito Bombers were introduced to conduct the raid from a low level and direct us with coloured flares and communicate by radio to direct the bomb aimers. They would tell us 'bomb between the reds and the greens' or 'bomb the reds, bomb the greens' and direct the mission like that.”

It wasn’t until the end of hostilities, when Robert saw photos of the countryside, that he realised the amount of the damage that had been caused. “My tour was of 31 trips, so my war was over. After that, there were only two more raids before VE Day. I would have liked to be part of them as they were to Berghtesgarden and the submarine base on the island of Heligoland.”

While waiting to be shipped home to Adelaide, Robert was posted to Brighton, England for some fun. With no duties, Robert was able to enjoy ice skating, dancing, drinking, and visits to London on weekends to see theatre shows.

“I was travelling back to Adelaide, and had to catch a train from Sydney to Melbourne, and then a train to Adelaide. I missed it and sent a telegram to my parents that I was going to catch the train the next day. We had a late night stop in Ballarat, and I heard that the war was over. I arrived back at home on VP Day. Can you imagine that? We all went into the city and joined the crowds and all the happiness.”

When Robert returned from the war, the biggest issue he experienced was the peace. Life back home felt so normal, and it seemed quite removed from his experiences in Europe. Robert joined the Air Force when he was 18, and returned with no qualifications, not knowing what to do with his life. An encounter with some old friends changed this. 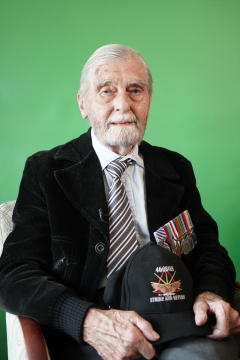 “I was invited to dinner, and I politely refused. Why did it do that? I wondered. I’m not doing anything. Life was going on for them, but for me, I didn’t know what to do. Because I was so used to living day by day, trying to survive each day. You don't expect to die, but you accepted it, and I had seen so many of my comrades go, my mind was still attuned to the fact that I might not be here tomorrow, I wasn’t thinking about tomorrow. So I had to get a diary and start to plan for the next day and to the future. I studied Chiropody which is now called Podiatry, and that led me to 40 years as a Podiatrist before I retired.”

Robert recalls returning to Europe in 1973: “I was travelling by train from Amsterdam, to Munich, and Salzburg when the train went through the Ruhr Valley, and a lot of the towns that I bombed. That really affected me.”

As told to the NSW Department of Communities & Justice Media Unit in 2020.