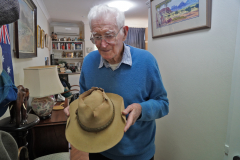 In comparison with a lot of other World War II veterans, at 94 Rod Kingham is a youngster. He was one of many young Australians who'd spent their adolescence reading, hearing and thinking about the war and how they could play a part if only they were a bit older. There were also the vivid images that leapt off the silver screen in newsreels that banged the drum for the Allied Campaign.

Growing up on the family farm, a soldier settlement near Leeton in the South West planes of NSW, Rod's community was very much defined by service and sacrifice "for king and country".

"We were in a soldier settlement area and all the men there were ex-WWI servicemen and my Dad had been in the Somme and he used to go to Anzac Day so we were an army family. His brother had also been in battle in France. The uncle who later helped me was a Major and there was one of Mum’s brothers who hadn't come back from the war."

Yet, even when he turned 18, Rod still could not simply walk into the local recruitment office. Rod was a casual farm labourer and farming was on the protected industry list so he wasn't officially allowed to enlist.

Rod was persistent, however, in his plans to be part of the war effort.

"My uncle, who was the local shire President spoke to a mate of his in recruitment who helped me get my application through." 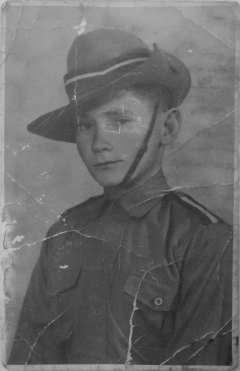 This was on 9 November 1944. Rod was sent to recruit training battalion in Cowra. This was just after the famous Cowra Breakout when 1,000 Japanese escaped the internment camp. After this he was sent to Bonegilla near Albury for vehicle training. There was a short spell of one day attending a training course in Melbourne before the end of the war in Europe was announced.  Next he was sent to Ingleburn in Sydney and finally he was posted to Brisbane.

He joined a unit that had returned from New Guinea, the 1st Watercraft Workshop Section. Within a short time the end of the Pacific war was announced and Rod's hopes of going overseas to play his part in the struggle against German and Japanese imperialism came to an abrupt halt.

His area of expertise was in riding and maintaining motorbikes and he had seen himself as a message courier in war zones or a general driver of trucks and army vehicles.

None of this materialised and the unit in Brisbane didn't have any motorbikes to speak of so Rod had to satisfy himself with being a section driver. Even this came about as part of a deal made with his Sergeant who was desperate for a crane driver. In those years forklifts were a thing of the future and any large objects or machinery were lifted with cumbersome, hard-to-operate cranes. He stuck at crane-driving for a while then was let into the transport section, albeit as a night duty driver.

His duties included collecting the 'signals' or communications from different bases and defence services in Brisbane and getting them to the Brisbane HQ. Then he would drive officers home.

"Then it was quiet unless a boat came in and then I would have to take the people from it around the city and also get the milk each morning at 5am."

Civilian life was resuming and the boredom of working the night shift for seven shillings a day meant he was able to take on casual work two days a week packing and unpacking frozen food at a private business across the river "for a few extra bob."

While the barracks were "pretty basic, I enjoyed it. Army life was good. The amenities were good and they even allowed us to start a surf club at Surfers Paradise and occasionally we were even allowed to borrow an army truck to get materials down there while we were building a club house. It's still known now as the Engineers' Club."

Rod then requested compassionate leave to return to the family farm. His father had died at an early age and his mother had been struggling renting out the farm. Now it was Rod's turn to take over.

Private Kingham - or "Craftsman" Kingham as many in 1 AUST W/CRAFT W/S were called - was discharged on 5 April 1946 and was soon apprenticed to the farmer managing the family property outside of Leeton. He built up the farm and became a successful contractor in the region.