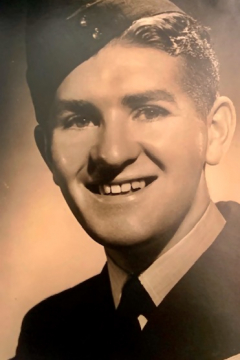 Rodney Higgs keenly remembers the day he enlisted to serve in WW2 and the precise reason he opted for the Air Force. “I joined up as soon as I turned 18,” he recalls. “You had to pick something and I chose the Air Force because I thought if I was going to die, at least it would be over quickly.”

Now 95 years old and living on Sydney’s northern beaches, he has mostly fond memories of leaving his home in Bellevue Hill for the Royal Australian Air Force (RAAF) training school at Bradfield Park (now Lindfield). “They gave me a sack and told me to fill it with straw and that was my mattress so I went from my beautiful home in Bellevue Hill to sleeping on a straw mattress,” he laughs. “But it was a great experience and the training prepared us for what was to come in Europe.”

Mr Higgs served with Bomber Command, stationed at the Royal Air Force base at Skellingthorpe in northern England, where he became a signaller. He recalls the day victory in Europe was declared, marking the Allied Forces’ acceptance of Germany’s unconditional surrender.

“We got the day off which was great because we had been working very hard. I remember feeling relieved. Thank Christ we don’t have to go through that again. VE Day was a big deal but we were not certain that it meant the end of our involvement. It wasn’t until VJ Day (victory over Japan) that we realised that’s it, we’re free now."

Mr Higgs remained in England for a few months after the war ended, celebrating his 21st birthday in Brighton as he waited for a ship to take him back to Sydney.

A proud recipient of the French Legion of Honour, Mr Higgs has kept in touch with many of the people he served alongside. “I have good memories of my time in the war, mainly about the people I served with and their courage and bravery,” he says. “Many of them became lifelong friends.” 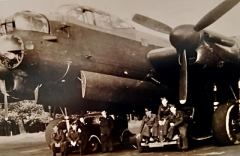 Rodney Higgs with his crew and their bomber