I was 17 years old when I enlisted in early 1942. They were looking for anyone really, I told them I was 18 but it was quickly picked up later on that I was 17, but it was too late and we were off. I wanted to be part of the Commonwealth efforts, and wanted to help England battle against Germany. My parents were born in England and came to Australia after the First World War, so I was keen to visit and defend their homeland.

My older brother Keith also enlisted and we were both part of Bomber Command. He was a wireless operator, and I was a pilot, flying Halifax bombers with No 102 Squadron RAF. My crew were mostly English, and we were based in Pocklington in Yorkshire.

I remember so clearly, one evening when we were attacked. It was a very dark night and my tail gunner spotted a German aircraft flying behind us, so I told the crew to get ready for a fight. He was flying to the left of us, trying to get underneath us to take out our fuel tank. I turned the aircraft nearly all the way over so we could have a look at him. There was only one pilot, and we were that close that I could see him, and what he was up to. The gunners gave him a pretty hard time and the plane was ripped apart. We survived and came back to base. We had had the same crew for many of our flights, and it was great to stick together. 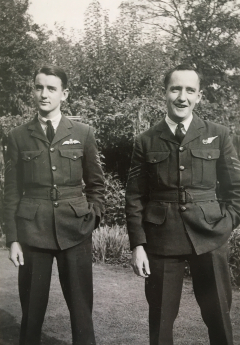 I turned 21 on 8 May 1945 in England, the same day we heard that the war was coming to an end in Europe. All the other Australian Air Force personnel were put on a ship back to Australia and we were too. We arrived back home in Sydney and I was very pleased to see my parents, who were so relieved both my brother and I came home.

We were then told to prepare for an attack on Japan, but then the bombs were dropped, which really ended the war.

I was honoured to receive a Distinguished Flying Cross (DFC) following a mission over Germany to take out a key target. We had some technical issues releasing the bombs, so we had to release them manually over a series of circuits without any protective fighter cover, as the rest of the aircraft in that raid had already turned back. We managed to complete the mission and returned safely back to base.

The DFC was presented to me at a Ceremony in NSW Government House when we retuned. But I felt the entire crew should have been given one as well. A few years ago I also received a French Legion of Honour for our contribution to the D-Day efforts with some of the other members of Bomber Command.

On 8 May 2020 I’ll be turning 96. I am staying with my daughter in the country near Coonabarabran and we’ll have a quiet day in the garden, due to the current isolation1, and reflect on our contributions to the war effort.

Ron with the NSW Premier - 2018 Centenary of Anzac Reception.jpg 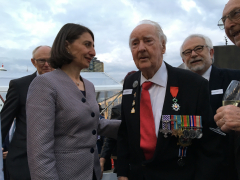 1At the time of writing, laws restricting public and social gatherings in New South Wales are in place due to the COVID-19 pandemic.