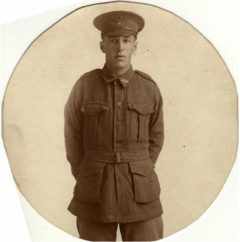 Ron McIntosh's interest in researching veterans can be traced back to 2009 with an old photograph he discovered in his grandparents’ home. The image, aged with time, is bereft of much detail, showing merely a soldier in uniform. His stance relaxed, his uniform unblemished, the photograph was likely taken just prior to his embarkation.

Yet for Ron, something resonated in this unknown figure that stared back at him.

He learned that the man was Ernest Heeger, a veteran of the First World War and Ron’s great-uncle. Ron was told that he had served and died at Fromelles, a battle that remains to this day the bloodiest 24 hours in Australian military history.

Only Ernest had not been killed.

While a severe gunshot wound had torn through his left shoulder, an injury that would ultimately result in his medical discharge from the Australian Imperial Force, Ernest survived the battle, returning to Sydney the following year. Yet any further questions Ron asked about the man were soon brushed aside:

‘In a nutshell I was told, like they used to, that you don’t need to know all this information about the family…I was told not to enquire about the dead, that history is history, move on.’

‘Of course,’ Ron remarked with a laugh, ‘that’s like flying a red flag at me – hey someone doesn’t want me to know something, I’ve got to find out.’

In 2009, his search would lead him to the New South Wales War Memorials Register. Still in its formative years, Ron noticed that a number of memorials were yet to be listed on the database: ‘that’s when my interest sparked up with the Register and when it all started in earnest.’

Ron has since become one of the dedicated voluntary contributors, capturing the details of war memorials across the state over the past several years. In a number of instances he has gone the further step in salvaging discarded honour rolls and finding new locations where these relics can once again be proudly displayed. This has unquestionably been the highlight of his involvement with the Register. 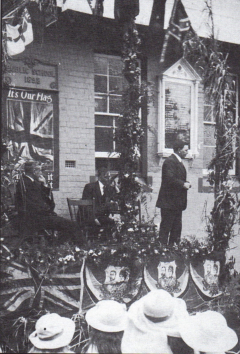 The Kellyville honour rolls are one such example of Ron’s work. Formerly housed in the Kellyville Memorial Hall, the three markers were moved prior to the demolishment of the building in the 1990s, initially to make way for a carpark.

Only after almost two decades had passed was Ron, with the assistance of a council worker, able to rediscover the honour rolls hidden away in storage. As Ron delved into his research, seeking to uncover the story behind these relics, he learned that one of them was first unveiled in 1917 during a service held at the local public school.[1]

Following discussions with the school principal, a service was arranged led by Dr. Brendan Nelson AO from the Australian War Memorial in which, over a century on from the original unveiling, the World War One Roll of Honour was returned to its rightful place, affixed to the historical building of the school, with the addition of two more honour rolls alongside it. 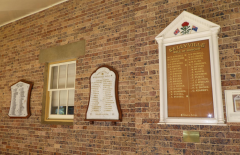 Kellyville Rolls of Honour rededicated in 2018

Yet the recovery of these physical remnants of the past holds far greater significance in preserving the memory of those from the region who served. On Kellyville’s World War One Roll of Honour alone, 32 servicemen drawn from 22 families are represented.[2] Five of those listed never returned. 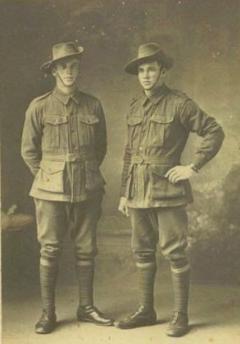 Among the five were two brothers who had enlisted together on 28 August 1915, at the ages of just 19 and 22

. In a twist of fate, the Russell brothers, like Ron’s great-uncle Private Ernest Heeger, gained their first experience in battle at the ill-fated Fromelles. William Russell survived, albeit wounded, his younger brother did not.

Only 95 years after the battle was the body of Arthur Russell able to be identified through DNA testing and reburied during a full military funeral on 19 July 2011. His brother William, killed in action just over a year after Arthur, is listed on the Menin Gate Memorial amongst over 54,000 other servicemen who have no known grave.

It is ensuring that these veterans are not forgotten, consumed by the passing decades, that has become the driving force behind Ron’s work as a contributor.

This is particularly relevant for individuals like Lance Corporal William Charles Wilson. Ron first came across Wilson while researching the World War One Roll of Honour in St. James’ Anglican Church, Pitt Town. He is a man who largely remains enshrouded in mystery, with little known about his life prior to his enlistment in the AIF.

Despite being twice rejected from service on account of his chest being too small, Wilson was undeterred, finally accepted into the ranks on 13 June 1915 at the age of 18. With both parents dead and no other known living relatives, the young tram cleaner from Wee Waa left all of his property and effects to a Charles Bailes, from Moorland, Wee Waa. The connection between the pair was never revealed.

On 15 November 1916, Wilson was killed in action while serving with 2nd Australian Division Headquarters. His remains were buried in Thistle Dump Cemetery, High Wood, Longueval. 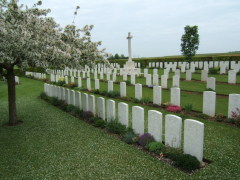 There were no notices in the press following Wilson’s death. No mention of memorial services held in his home town. No inscription submitted for his headstone. His medals and memorial plaque still remain on the ‘Untraceables List’.

Yet in this small church lies one of the only tangible testaments to the life of William Charles Wilson, a link that, resulting from the Register and Ron’s research, has enabled his service to be recovered and preserved. It is a point that Ron recurringly stresses:

‘I'm a firm believer that the veterans listed on all war memorials should be recognised. Nobody knows the stories behind the name and this medium, the Register, could allow people to find the details and stories on all NSW veterans.’

To some degree Ron’s passion for preserving the memory of those who served in various conflicts can be linked to his own service during the Vietnam War. He recalled that he was not shocked when his turn came for National Service, always knowing that it was a possibility. After he had completed his ten weeks training at Kapooka, Ron was transferred to the Water Transport Units, posted initially to the 35 Water Transport Workshops Squadron and later to the 32 Small Ships Squadron. 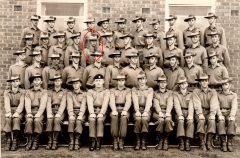 It was while serving as the ship’s electrician aboard the Royal Australian Engineers Army vessel AS3051 John Monash that Ron first sailed to Vietnam, transporting vital military supplies. Reflecting on his service, Ron remarked:

‘I feel that I played one of the many small, insufficient parts of the big picture. Many service personnel played small parts, parts that need to be carried out to support our frontline troops, the part that’s not deemed newsworthy, the part that’s never talked about.’

‘There was nothing at the time…a lot of people didn’t want to talk to you, it was just the way it was and you accepted that. When I started working again back in the state government, it was just never brought up in conversation, no one ever asked anything, they just accepted it and it was gone, it passed. I didn’t protest, there was no point in it. I just accepted it and it went away.’

It was only since becoming involved with the Register that Ron began to reflect not only upon his own service but also that of his father’s, Ian McIntosh, during the Second World War. Like many returned servicemen, Ian never spoke about his experiences abroad.

The only insight lay within the pages of his wartime pocket diary. The entries are hurriedly scrawled in pencil, some pages still smudged with dirt, the edges worn. For three decades the diary sat dormant, until finally in 2008 Ron began to read the entries.

‘To read the words as written and the descriptions of Ian’s own conflict in New Guinea is very moving and emotional. It affects me every time.’

What he noticed was the shift overtime, from his father writing a page each day, to writing three lines every two days, then just once a week. Then came one entry that was just three words: ‘Hell on earth.’ 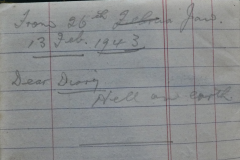 The entry spanned from 26 January to 13 February 1943, almost three weeks. No further context is provided but for Ron the thought process behind the words was clear: ‘why am I doing this? Why am I here? This is crazy.’

‘[War] certainly changed his life,’ Ron remarked, ‘it changed everybody that served on the frontline…everyone who was involved was affected in some manner…The document opened my mind to the far reaching and unknown events that took place. It changed my own way of thinking about his conflict.’ 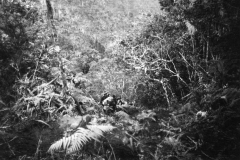 'My hat goes off to all service personnel in the past, present and future. This medium, the Register, is here to use so let’s promote the history behind the system, let’s tell as many people as possible. That’s the least I / we can do and the Register is the place to do it.’

For those looking to become involved in the Register, Ron recommends networking with other interested individuals, ‘someone with the same interest, someone to bounce ideas off and to discuss your questions and queries.’

Also do not be deterred by a challenge. Ron recalled one example of the Ewingsdale Roll of Honour which had 43 individuals listed. He estimates that the project, not including travel time, took around forty-two hours before Ron could upload his findings to the system. With this in mind, he urges prospective contributors to ‘be prepared to step back from research from time to time and regroup yourself.’ Yet the satisfaction in seeing a registered memorial live on the website is enormously rewarding.

The New South Wales War Memorials Register has become a medium through which stories of service and sacrifice spanning over a century are gradually being recovered and preserved. As the database continues to expand, an interwoven understanding of Australian experiences at war and how a nation recovers and memorialises in the aftermath of such conflicts is becoming possible.

[1] Note on the War Memorials Register, it says this particular Honour Roll (the one pictured in the historic photograph) was unveiled in 1919 and the plaque reads ‘1919 – Roll of Honour’ but newspaper reports show that this World War One memorial was unveiled two years earlier: ‘Kellyville’ Windsor and Richmond Gazette (9 November 1917),

Related stories and links
Contribute to the Register