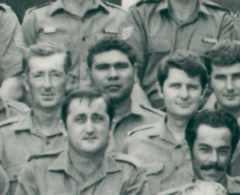 Roy joined the Army and enlisted in 1958, and it was in the Army that he found a particular kind of equality. He was a Section Commander in the infantry, Quartermaster, and a Warrant Officer Class One, serving in Malaya, England, New Zealand and twice in Vietnam. Roy served for over 36 years.

During Operation Surfside on his second tour to South Vietnam, the then Corporal Mundine deployed his section on the ground and moved forward alone to assess the enemy position. He sighted enemy bunkers and was about to signal further instructions when he detonated a mine that severed his lower right leg and caused severe wounds to his back and his other leg.

"We saw this bunker system, so I went forward to have a look at it and I tripped a mine of some description and it just went off, bang! Blew my leg off."

Members of his section started to move forward to help him but Corporal Mundine ordered them to stay out of the area, later shown to be an enemy minefield.

"Well they started to move forward, and they would have probably come into the area where there were more mines and if there was anyone up there then they would have shot them. So we had to reorganise back on the ground so if anyone in that system had attacked us we'd be able to hold them off. And that's what happened. Because it's better one's mangled than ten. You know."

For more than 40 minutes, Corporal Mundine continued to give instructions to his section and refused to allow any members of the platoon to move near him until engineers had cleared a path through the minefield.

These actions were typical of his outstanding leadership, and he was mentioned in Dispatches on 25 April, as leading section commander with 1 Pl A Company during Operation Surfside.

In 2016, Uncle Roy was appointed as the Army’s first Indigenous Elder.

“As the Army Elder, I talk to the younger people and encourage young Indigenous people to start thinking about joining the services. Army is an awesome career which is great for young people as it gives them so many opportunities to do and learn new things.”

Watch Roy talk about his time as an Infantrymay