Shirley was an apprentice bookbinder at Waite and Bull and Norman Grinyer was a printer at Penfolds when their romance began. Shirley and Norman became engaged, but then World War II broke out and Norman enlisted. 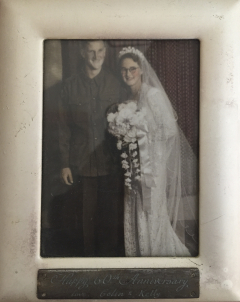 Shirley and Norman on their wedding day

Norman Grinyer joined the 7th Australian Division Cavalry Regiment and began his war service in tanks in the Middle Eastern desert. When the Japanese threatened, his division returned to Australia for retraining as infantry.

“Norman had seven days’ leave,” said Shirley. “He called me and said to arrange a wedding for the Saturday. I went shopping in my lunch hour to find a wedding dress. Things were scarce, but there were two available and the first one fit.”

Norman and Shirley Grinyer were married on the Saturday, but there was no honeymoon. Norman’s division was sent to the Atherton Tablelands for jungle training. Shirley briefly joined the other new wives “camp chasing” in Queensland before returning to Sydney to enlist.

“We had no idea when our husbands would come back,” said Shirley. “We had to organise our own lives.”

Shirley joined the Australian Army Medical Women’s Service and was posted to Concord Hospital as an assistant nurse. “Four assistants would work with one nurse. There was a great camaraderie at Concord.”

“Most of our patients were servicemen, and they were the best patients you could find. You might have a civilian who had had his tonsils out, or some other minor thing, who would be the greatest whinger. But the servicemen could have bullet wounds and be really very ill, and they wouldn’t complain a bit.” 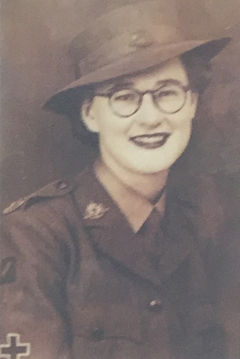 Thelma Grinyer in her AAMWS uniform

One morning when Shirley began her shift, she heard a male voice asking, “Is that you Shirley?” Ian White was in her husband’s unit and was injured in New Guinea. Ian described the action for Shirley.

“Our boys were charged with pushing the Japanese out to sea at Sanananda. The Americans said the Japanese were debilitated and it would be an easy job. But within half an hour the Commanding Officer and his assistant were dead. Things were a shambles and lot of men were killed.

The wounded were brought by sea to Townsville and then by rail to Concord. None went back to New Guinea they were too badly injured. Ian White had a bullet in his lung. He recovered but was never really well.”

Melbourne Grover was shot right through the buttocks. He had a huge exit wound and the doctors said he would never walk again. Years later we met up with him in Boggabri and he was riding a horse.”

Norman Grinyer returned to Australia with tropical dysentery. He was sent to Bathurst. “They didn’t have time to worry about where husbands and wives were,” said Shirley. “People were numbers and did exactly what they were told.”

“In the Army every single aspect of life is determined for you. From the minute you sign the paper, you can’t do anything you want to do. You eat, wear, sleep and go where they tell you to go.”

“When the war ended many people asked, ‘Now what?’. After living under one situation it was difficult to change back. Many people had grown into the service life and didn’t know what to do.”

Thelma “Shirley” Grinyer was awarded an OAM for service to veterans and their families through the Narrabeen RSL Veterans’ Retirement Villages. 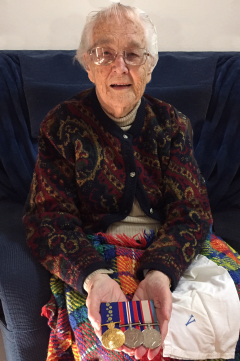