When Victory in Europe was declared, Tony Adams was in the middle of the Indian Ocean coming through the Suez Canal on the troop ship Nieuw Amsterdam. He’d completed 36 missions over Germany and occupied Europe as part of the British Royal Air Force’s Bomber Command.

“The ship had a Dutch skipper and that night, the 8th of May, I can remember his words very clearly over the loudspeaker system over the ship,” says Tony. “And he said (and this is my impression of a Dutch accent): I have just received a message from the “admorality” the war in Europe is over! Splice the mainbrace!” To splice the mainbrace is a very old navy term which indicated to them they were to line up for a tot of rum or whisky.

“In a way I was very disappointed I was on that ship. The celebration had I been in London would have been absolutely outstanding.”

In spite of his disappointment, Tony was enthusiastic to sign up to the armed forces, volunteering for aircrew before reaching the minimum age of recruitment - and within three weeks of turning 18 he was picked up by the Australian Army. But this wasn’t his first choice. “I went into a signals unit and I learnt Morse code and then we were shipped across to Western Australia defending the West Australian shore from Japanese invasion,” he says. 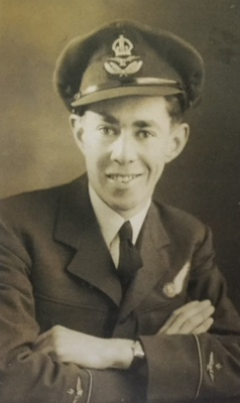 He spent eight months with the Army before he got what his heart desired, a transfer to the Royal Australian Air Force (RAAF). “After handing in my khaki uniform one day, the next day I got an air force uniform,” he says. Tony had been inspired to join the war effort after hearing the stories of Gallipoli and the Western Front at the Anzac Day Services at Roseville Public School as a young boy.  He was attracted to the action and adventure it offered and thought the Air Force would suit him best.

“I was a very squeamish boy and I may have even fainted once or twice hearing all this!” he says. “So I was determined not to go in the army. If I’m going to get killed I want to get killed quickly!”

After some initial training in the basics of how to march, salute officers, elementary mathematics, and learning aircraft recognition at Bradfield Park in Sydney he was posted to the RAAF Base in Parkes NSW for six months to complete a radio course. He flew in the Australian designed Wackett Trainer which had a pilot up front and he’d sit behind with the radio to pick up the message sent to plane in Morse code.

His training continued six month’s later at RAAF Port Pirie in South Australia where he flew in a Fairey Battle, a light bomber aircraft. “I was officially a wireless air gunner with the rank of Sergeant,” he says.

In June 1943 Tony was ready to head to Europe. Together with 200 fellow Australian airmen and 100 New Zealand volunteers he sailed across the Pacific Ocean to America, eventually joining the Queen Mary troop ship from New York to the River Clyde, Scotland, carrying 16,683 troops and crew aboard. There was further training until he joined No. 149 Squadron in a crew of 4 Australians, based in a village called Methwold about 30 miles from Cambridge, England. Soon enough he was taking part in missions.

Before and after D-Day (6 June 1944) his squadron was flying over France at night in Stirling aircraft, dropping supplies to the French Resistance in forest clearings. “The containers would float down in parachutes and we’d see the Frenchmen come out…horses and carts to collect them. They had all the arms, ammunition and explosives in their fight against the German occupied forces there,” he recalls. Months later, his squadron was on a mission in Lancaster bombers taking out German industrial targets.

“I saw a number of aircraft shot down and some horrifying cases…aircraft with seven men inside it burning,” he said. “They couldn’t get out, the centrifugal force kept them in and they couldn’t get out with their parachutes. It is very, very disturbing.”

The numbers of lives lost still occupies his thoughts and something he didn’t fully comprehend before he joined.

“I went to a training station on the coast of Scotland before I joined the squadron. There were 20 of us Australians…within nine months of that course finishing in December 1943, eight of the 20 had been killed. Of those eight, five were aged 20, one was 21, one was 30 and one was 31.

He said it was representative of the losses experienced by the whole of the Australian Bomber Command. “People ask, 'if you’d known that, would you have joined the air force'? I probably still would have, thinking that it won’t happen to me.”

“There were instances during the war where I should have been killed and I wasn’t – pure luck.”

“I was one of the very, very lucky ones,” he says. “And I’m still lucky because I’m 96. And if we didn’t have this virus I’d be playing bowls tomorrow.”

Tony was discharged from the RAAF when the war ended in Japan, resuming a very different kind of life to the previous years. “I went into a very exciting job then…I resumed my accountancy studies and became an accountant!” he says.

“Every day I wake up I realise what a lucky person I am.