Victor Nagle enlisted in March 1941. He was 23-years-old and out of work, and the promise of five shillings a day plus keep was too good to pass up. 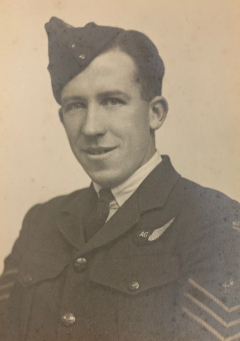 “I did my basic training at Somers in Victoria,” said Victor. “Then they told me I was going to be a Gunner and sent me to Parkes to learn how to use a gun. Next I was off on a boat to England to join the Royal Air Force. I felt wonderful. I couldn’t get there quick enough.”

Victor trained at RAF Driffield and joined No. 141 Squadron based at RAF West Raynham in Norfolk. After five months he was ready for his first mission, a night raid over Berlin. “I was the most excited bloke in the world. I was going to finish the war off. I was hoping it didn’t end before I got there,” said Victor.

“Halfway through the mission I was wishing it would hurry up and end. It was bang, bang, bang. Bombs were going off everywhere. I thought let’s get out of this place quick.”

“After the excitement of the first mission, the rest were all much the same. I was scared we wouldn’t return and that every mission might be our last. It was always a much better feeling coming back than going there."

“We were frightened, but it was a different sort of frightened. It was not a scaredy sort of feeling. No one admitted to being frightened, but anyone who told you they weren’t frightened is a liar. I was very lucky, but we did lose a fair few planes.”

“We only flew raids on dark nights so the Germans wouldn’t see us. When we returned at about 3am or 4am, they would give us a good meal of bacon and eggs and coffee.”

“We would know by about 11am if we were going to fly that day. We would leave at about 4pm or 5pm when it was already pitch dark in England. Then it was one or two hours till we reached our target. The planes we flew were Stirlings, they were slow old planes.”

“During the day, there was plenty of time when we were doing nothing. I wanted to learn something I could use when I left the Air Force. One fellow from our crew was an accountant and during the day he gave four of us lessons in accounting.”

“When we were taken off Bomber Command, we flew over France to drop food and ammunition. We flew on moonlit nights and we flew low enough that you could see everything. We would drop our cargo and leave as quickly as we could. Fortunately, there were no attacks.” 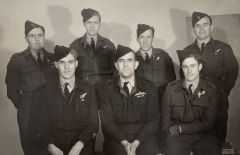 141 Squadron. Victor is second from the right in the back row

After completing 32 missions, Victor was posted to RAF Wing where he was responsible for training Gunners. After six months he was due back on operations but by then the war was over.

“I don’t know how we knew the war was over, word just got around,” said Victor. “I thought, ‘You beaut, that will do me. Now let me go home.’ We could stay around on holiday or get back on the boat.”

“After I was demobilised in Australia, I found it a bit hard to adjust. I had three jobs and I didn’t like any of them. I was restless and I found it hard to fit in.”

The fourth job that Victor landed was in the Accounts Office at David Jones. It turned out to be the right job for him and he stayed at David Jones for 30 years. 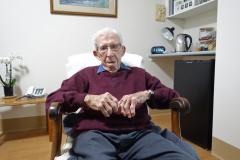