Charles Joseph Merryfull was born on 27 November 1919, the second son of Annie and Edward George Merryfull. The Merryfull’s resided in the historic gold mining town of Adelong in southern New South Wales. In the 1920s, the family moved to Sydney where Edward set up in practise as a veterinary surgeon and his two young sons attended Hurstville Public School. Charles (who was known as Joe) later attended the Technical High School, after which he studied Pathology at the University of Sydney and worked as a laboratory assistant there. 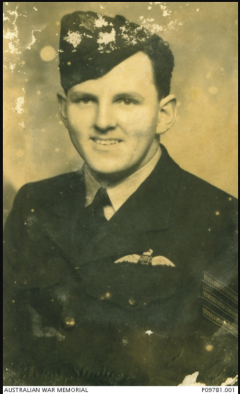 The Second World War interrupted Joe’s plans for a medical career, and on 9 October 1942 he enlisted with the Royal Australian Air Force (RAAF). Trained at various flying schools in Australia, Merryfull embarked from Brisbane for England in July 1943 with a ‘posting to overseas headquarters.’ Promoted in quick succession, by May 1945 he had attained the rank of Squadron Leader.

In England, Merryfull was attached to No. 199 Squadron, Royal Air Force (RAF), which was part of the 100 Group (Bomber Support). As a special duties force, the squadron was tasked with vital support operations; disrupting German radio communications,  jamming enemy radar equipment and carrying out other types of electronic warfare. In 1945, under Merryfull’s guidance, personnel from 199 Squadron invented an experimental in-flight window launching dispenser. The new machine systematically dropped packets of window radar countermeasure foil in a carefully controlled pattern, and at a chosen speed. The foil (or ‘window’ as it was called) was designed to confuse, or rather jam, enemy radar operations.

‘Window on the aeroplane’ played an emphatic role in disrupting German air operations over Britain and France and saved the lives of thousands of Allied airmen. It is beyond doubt that countless civilian lives were also spared by thwarting the bombing ambitions of the merciless Luftwaffe. Dispensing window in this manner was also adopted by air force operations in the skies over the Pacific theatre against the Imperial Japanese Army Air Force.

Joe Merryfull continued to work on modifying his window launching machine to enable a version to be installed in Mosquito aircraft. On the morning of Sunday 8 July 1945, Merryfull and Leading Aircraftman twenty-one-year-old 2209126 Francis Grady took off from the RAF base near the ancient village of Swanton Morley in Norfolk. They were testing Mosquito PZ178 for a window dispensing trial. Shortly afterwards, debris from the aircraft fell near the sleepy village of Docking, some 14 miles north-east of Kings Lynn. The aircraft had suffered serious structural failure and had broken apart mid-air. The port window tank had detached, and as it fell away, it struck the tailplane and caused the Mosquito to dive out of control. Although he was a highly experienced pilot, it is believed that Merryfull pulled back on the control column, imposing severe ‘g’ forces on the starboard wing, which then broke off.

Neither Grady nor Merryfull survived. Grady’s remains were taken home to his parents and buried in St Helens Cemetery in Lancashire. The hapless Australian was interred in Cambridge City Cemetery, the inscription on his grave simply stating, ‘He gave his life that we may enjoy peace’. King George VI later wrote a letter to the Merryfull’s in Sydney in which he wrote, ‘The Queen and I offer you our heartfelt sympathy in your great sorrow. We pray that your country’s gratitude for a life so nobly given in its service may bring you some measure of consolation.’ There was another measure of consolation of sorts later on too; in 1946, Joe Merryfull was posthumously awarded membership of the Military Division of the Most Excellent Order of the British Empire for his successful invention of the window dispenser.

Prior to the war, Merryfull had purchased a block of land in Stanley Street, Peakhurst. After his untimely death, his parents built a house on the land and named it ‘Stirling’ in honour of their son Joe and the aircraft he had successfully flown so many times. Today, Charles Joseph Merryfull’s service and sacrifice is commemorated at the Hurstville War Memorial and on Panel 127 in the Commemorative Area at the Australian War Memorial in Canberra. Lest we forget.

The photograph below is of some of the crew from No. 199 Squadron, RAF, in 1943 with their Short Stirling Bomber named B for Beer. Merryfull is not in the photograph, however he did fly in 'B for Beer'. The bomber's nose art  was a bear clutching a beer bottle. Although Merryfull was a teetotaller himself, a picture of a beer mug was logged on the side of the aircraft following every successful sortie; by the close of the war, an impressive 76 beer mugs adorned the bomber.