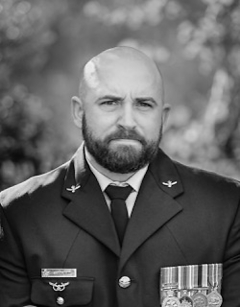 Coen Henry's Air Force career is a long way from the glamorous images of Spitfire pilots and Top Gun, but it's no less a story of guts and perseverance.

As a young Aboriginal man of 19, Coen had never given the Defence Force a moment's thought. He was living in one of the country's poorest urban areas, Sydney's Mt Druitt, where the community fights an ongoing battle against unemployment, low education outcomes and drugs and crime.

But a chance encounter at the local shopping centre in 2008 sent Coen's life in another direction. Sergeant Major Col Watego had served in the Australian Army for over three decades and looked the part in his neatly ironed uniform and polished black shoes. But there was something different about him as he sized up Coen and his mates and challenged them about their future.

The others dismissed Col as another symbol of the authority they'd constantly struggled against. Coen saw something else. Like them, Col was Indigenous and he asked them: "Are you man enough to do this? And that stuck with me."

Thirteen years later, the answer is, yes, he is man enough.

Now in his mid-thirties, Coen Henry is a decade-plus veteran of the Royal Australian Air Force, has completed various levels of training including a university degree, served his country overseas, been commissioned, and is about to graduate as an officer.

"It's crazy to think about how the last ten years has shaped my life, given my skills and the hardship to get my foot in the door."

His path was hard and he had his doubts, but he was committed right from the pre-recruitment course run in 2008 by Col Watego, then the RAAF's Indigenous Liaison Officer.

Coen applied for the Australian Defence Force but first he had to get his neck tattoos - an expression of the tough Mt Druitt community - lasered off over a period of a three years.

Finally, on 25 April, 2011 his application to the RAAF was accepted. Coen's life was about to go in a different direction and he got his affairs in order, bought a new suit and flew to 1RTU at RAAF Base, Wagga Wagga, in his first plane trip ever.

"I went through that and came out the other side in uniform and my mates said, what happened to you, you disappeared?  They couldn't believe I'd actually made it because it had dragged on for so long."

Coen breezed through the training with its mix of drills, life skills, teamwork, resilience, physical fitness and weapon handling.

"I actually found it easy because growing up my old man was very strict, very disciplined." 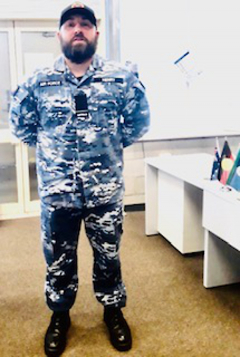 From there he moved to his first posting at RAAF Amberley for further training before returning to Wagga Wagga for training in logistics and supply.

Next was RAAF Williamtown and then within 12 months Coen was deployed to the Middle East as part of Operation Slipper and Operation Accordion. The daily temperature regularly hit 55 Celsius. It was long hours and his range of duties included organising ramp ceremonies for fallen soldiers and even the Australian passengers who'd died in the 2014 downing of Malaysian Airlines Flight MH17.

"We held a parade on either side of the C130 J Hercules bringing in small coffins that resembled little kids and that hit home for me thinking about my own son."

It also represented one of his career highlights with Coen taking charge of the NAIDOC ceremony as the CSU-11 rotation's only Indigenous person. It was a first for Coen:

"I had a group of guys helping me and I got painted up and did a couple of artworks and presented one each to commanding officers and it went really well." 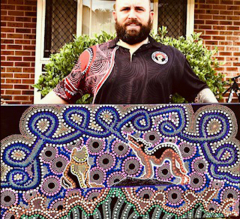 Since then Coen has led the NAIDOC celebrations every year by way of keeping his connection to his culture and he takes great pride in reconciling his Aboriginal culture with that of the RAAF.

"In the Air Force I've made lifelong friends and mentors. More specifically someone who's shaped my life was my Commanding Officer in Dubai and she was the MC at my wedding a few years ago."

It was while serving as a senior member in his recent Richmond posting, leading a team of logistics and plant operators, that Coen saw himself as officer material. During the unprecedented fires of 2019-2020 he also found himself overseeing the RAAF base's bushfire assist operations.

"You're talking a high tempo period, 15 hour days, seven days straight for months, doing everything from clearing roads and fire-affected communities to requesting additional personnel and sourcing and maintaining chainsaws, plant operational equipment, and I thought if I can do this I can do anything."

As a result, Coen's previous squadron warrant officer told him he'd been nominated for the National Emergency Medal for his efforts and sacrifices during that time.

Initially his family, friends and the community back at Mt Druitt questioned his decision to join the Air Force, given Australia's historic persecution of Aboriginal Australians. That's all changed.

"It's been ten years but they've come around and they appreciate it. Originally there was some shame and a lack of understanding. Now I'm held in very high regard by the entire family, they're always talking about what I'm up to." 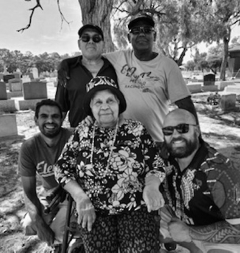 One reason Coen pushes himself hard is the troubled lives his mates back home have led.

"A lot of friends are dead or incarcerated, and that's really hit home and stuck with me, knowing I've been tested and shown grit and had to make hard choices and sacrifices. It's become my life and in some senses it's fantastic, in other ways it's become hard." 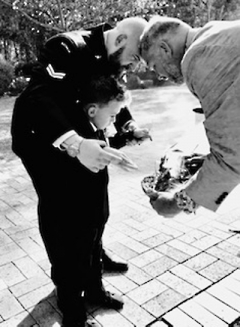 Coen has a clear career plan in which he sees himself working through postings and promotions with the hope of being appointed as a Wing Commander and appointed as the Senior Indigenous Liaison Officer (SILO), overseeing an ever-expanding Aboriginal & Torres Strait Islander RAAF presence.

In the officers' course he draws a lot of confidence from the three other Indigenous members he is training with. One of the officer trainees is a good mate from Wagga Wagga whom Coen met back at his posting in 2015. Ten years later, Coen, James and the other two are looking at an October 2021 graduation where they'll be officially Flying Officers.

"I get a lot of mixed emotions knowing I'll be an officer soon. I've come down a long road to get here when you bring in statistics that were heavily stacked against me. As for the naysayers who didn't think I'd make it, they've fueled me to achieve this milestone and create a motivation for me and my kids and nephews and nieces to become the best they can, they're the driving factors for me to be the best I can be."