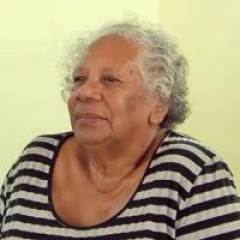 Doris Follent discusses her service as a nurse in the Australian Army from 1963 for four years where she rose to the rank of Sergeant.

Doris joined the Army to ‘forge her own way’ and served primarily at the Ingleburn Army Camp south west of Sydney.

She enjoyed her time in the Army, particular being involved in sport, and found nursing in the services similar to civilian nursing.

Doris was nursing at Ingleburn in 1967 when the first Australian soldier to be admitted to the camp’s hospital having been wounded in the Vietnam War died from his wounds – the first such death on Australian soil.

Doris also speaks about her father, Solomon Bellear, who served during World War 2 in Papua New Guinea as an engineer.

Watch Doris’ interview at the Tweed Heads Yarn Up.

Please note: Aboriginal and Torres Strait Islander people should be aware that this website may contain images, voices or names of deceased persons in photographs, film, audio recordings or printed material - read more