Rae Hogan remembers the night Churchill declared war on Germany. Her parents had the only shortwave radio in the neighbourhood and people gathered at their house to listen.

“Within 48 hours of war being declared, there were queues of men joining up,” said Rae. “They weren’t thinking about going to war, they were thinking about the five bob a day they were going to get paid. Australia was coming out of the Depression and there was no work.”

Rae was a student at the Domestic Science School in Croydon when the Second World War began. She has fond memories of receiving top marks for turning the heel of a khaki army sock and for the neatest hand sewn French seams on Bombay bloomers for the women of the Land Army.

As the war progressed, with so many men on active service, the government formed the Manpower Directorate to conscript workers. “From the age of 14 years and four months, 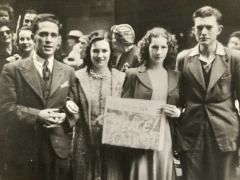 Rae (right) and her sister, Betty, at the peace celebrations in Sydney, 1945

with your parents’ permission, one could be placed in essential industry,” said Rae.“My parents received papers from Manpower, and as I was not 18, I had no say in what my future held.”

Rae was placed in a cotton mill in Homebush making khaki material for army uniforms. The mill was built on a swamp and after a year of constant flu, Rae got a doctor’s certificate to leave the mill. She was given time to recover before being placed in an engineering factory making gun barrels for .303 rifles. Molten steel was poured around a core of sand to form the barrels, and Rae was given the job of drilling out the inner core of sand.

“I was working a big drill that a man would have used,” said Rae. “It was hot, dangerous work with trolleys holding molten metal just a few feet away. You don’t realise how long a .303 gun barrel is till you’re doing 500 or 600 a day.”

After almost a year of drilling rifle barrels, Rae was placed in the HMV factory making records for the American troops.

“The factory was called the ‘Black Hole of Calcutta’. Working conditions were shocking. The records were still hot when they came off the mould and went onto the spinning circle. If you didn’t catch the records properly, you could get a sharp cut on your hands. It was later that we used an abrasive to make the edge of the record smooth.”

Rae worked at HMV for six months before moving to Jantzen Swimwear, an American firm making machine knitted woollen clothing for the servicemen and women.

“I was stitching the hems on Size 28 and 30 cardigans for men. They were big hems and you had to work quickly. The Americans brought in timing experts. They timed a worker to set a speed for making an item. They set a piece rate and if you couldn’t match the set speed, it was difficult to earn a liveable wage.”

Rae was working at the Jantzen factory when the war ended. She continued on there after the war and became the union rep.

Rae remembers the day peace was declared, “We all went into Sydney. There were crowds in Martin Place, singing and dancing. I was in that crowd. A lot of people were crying in relief that the war had ended. Strangers would come up and cry with you, but we were happy.”

Although the war had ended there were still many anxious families waiting for their loved ones to return. “We heard that when the war finished, the Japanese killed every POW at Sandakan.” 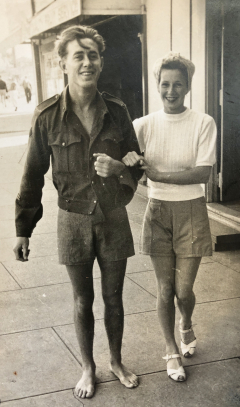 “People returned in drabs,” said Rae. “In my home, there was a daily waiting for people to come home. My uncles and a lot of local people who I’d grown up with were away at war. Some sons were killed as POWs instead of coming back. There was a lot of crying and heartache. A family from up the road had a son in Changi. He returned from the war but he was very ill. For a long time, his mother just cried and cried.”

“The memories of the war have always lived with me. You can’t go through a war without being affected.”

Rae met her husband not long after the war ended. He was still in the Army when they met. Ron Hogan was a signalman in the 2/6 Field Regiment and had gone ashore at Balikpapan in Borneo in July 1945.

“Ron and his partner, Vince Walsh, landed on the beachhead and were sent into the jungle to erect signal lines. It was just the two of them putting up the lines, they weren’t with a whole group of men. Ron was just 19 years old when he saw women and children who had been bayoneted by the retreating Japanese,” said Rae. “It was a cruel, grim period of the war. Ron didn’t talk a lot about what happened at Borneo, but the beach landing deeply impacted his philosophy on living. He wrote a poem about the stupidity of war.”

Ron contracted tuberculosis in the jungle and the disease had a lasting impact on his health. Ron and his signalman partner, Vince, started a parquet flooring business after the war but Ron left the partnership due to poor health. Through the Commonwealth Rehabilitation Training Scheme (CRTS), Ron studied design at the National Art School. He went on to have a career in textile design in Australia and internationally.