This story is part of a developing series exploring the wartime history of Anzac Parade and its surrounds in Sydney's east. It is an ongoing collaboration between the NSW Office for Veterans Affairs and Margaret Hope, whose father Robert Hope served in the 1st AIF 1916-1918. Read more of Margaret's research on her website Daughters of Anzac.

At the outbreak of the Great War in 1914, many men who responded to the call-up to join the First Australian Imperial Force were brought to various depots and camps radiating from these parklands to train and prepare for war.

Enlistees engaged in training at the Randwick Army Barracks Rifle Range (now part of the Randwick Environment Park) and the mobilisation camp in Malabar (now the Anzac Rifle Range). While some were billeted (lodged) at the Engineers Depot and The Royal Agricultural Society Showground (RAS), others lodged at camps on Randwick Racecourse, Kensington Racecourse (now the University of NSW) and Rosebery Racecourse. Besides daily exercises around the camp sites, troops went for long route marches through surrounding suburbs and the city.

The Engineers Depot on Park Road (where the Sydney Football Stadium stands today) was a scene of thriving activity. Engineers, signallers, wireless operators and others were trained here1. Training included practice in building bridges, pontoons and wireless towers as well as cavalry practice in Centennial Park.

Rupert Taylor Vowles, who trained as a signaller, wrote about his experience in the Engineers Depot:

"...I was given blankets & a waterproof sheet & told to sleep for the time being in the Engineer Drill Hall. Here amongst other sigs I found some old pals...At 6.30am [the] Reveille sounded & was welcomed without any large exclamations. One morning I got out to do physical training and after running for three miles around Centennial Park I returned almost dead."2

Regular social events were held at the depot, such as weekly concerts to which the men were allowed to invite their female friends.3 Noel Glendenning Linton, who served as a sapper in the 15th Field Company Engineers, recounted "many happy days and hours in this camp...it is excellently run and administrated."4 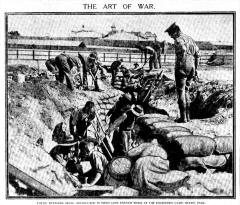 The RAS Showground saw hundreds of thousands of men pass through during the war. While many arrived from around the country for specialty training, the majority were departing to or returning from battlefields. Troops were inspected and reviewed prior to departure before marching, or travelling by tram, to their ships at Woolloomooloo and Circular Quay5. Australia's first overseas operation of the war was undertaken by a force of 1,500 men who left the RAS and sailed for Rabaul, German New Guinea on 18 August, 1914.6

The RAS Showground was also the focus for sombre Anzac Day commemorations in 1917, in which a military procession of returned soldiers was welcomed by 25,000 people7. 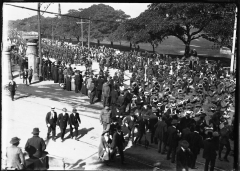 This photo depicts troops, believed to be those of the Australian Naval and Military Expeditionary Force, marching on Randwick Road (now Anzac Parade) toward Circular Quay for final embarkation on HMAS BERRIMA, 18 August 1914. The AN&MEF was a small volunteer force of about 2,000 men formed for the task of capturing German New Guinea. (Source: Australian National Maritime Museum)

In 1917, Randwick Road, which bisects Moore Park, was renamed Anzac Parade and a commemorative obelisk was erected at the northern end. This became known as the Anzac Parade Obelisk. Memorial services and commemorations were held here during and after the war.  In 1998 the Obelisk was moved approximately 330 metres south to allow for the construction of the Eastern Distributor and in 2014 it was moved again due to the construction of the Albert 'Tibby' Cotter Bridge, a pedestrian bridge built primarily for crowds coming and going from the nearby Sydney Cricket Ground and Sydney Football Stadium.

In 2017, in honour of the centenary of the naming of Anzac Parade, the Obelisk was relocated to its present position in Moore Park, and now stands alongside a commemorative Aleppo pine planted in 2019. 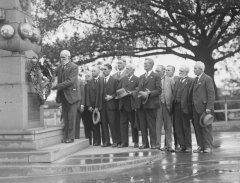