For David Roden his search for war memorials has led him to unsuspecting places. The project he is currently working on involves a cave and a group of First World War ex-servicemen who formerly gathered there. Their names, carved into the cave wall, remains the only marker for the space that was once a retreat for them. Each member that David has been able to trace of the self-entitled ‘Burwood Bing Boys’ was wounded during the war, often while serving on the Western Front.

‘I assume that this was a place of R&R for them because you know, no one knew about PTSD…the National Parks and Wildlife people told me that when the water is very still, out in front of the cave you can see a very goodly collection of [beer] bottles. I take it they got away just to try and have their own form of therapy dealing with the horrors of war.’ 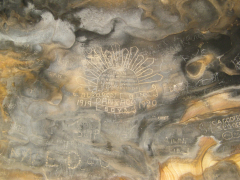 David is one of the earliest and longest-running voluntary contributors to the New South Wales War Memorials Register. His involvement with the project has spanned two decades and during that period he estimates that the number of memorials and names he has recorded extends well into the tens of thousands. Yet David has a unique perspective in that he was among those who transformed the idea of the Register from a concept into a reality.

As Australia entered the new millennium, Rusty Priest, the then President of the NSW branch of the Returned Services League approached Premier Bob Carr to discuss the poor state of repair a number of war memorials had lapsed into over the decades. In order to conserve and protect these historic remnants, however, it was first vital to create a database to record where they were.

John Wright from the State Library was subsequently tasked with creating an electronic database which could not only be easily updated and accessible but would also allow an array of participants to contribute entries including local governments, schools, RSLs and individuals.

While David’s team in the Department of Premier and Cabinet were responsible for publicising the Register, David soon became intrigued by the project:

Since the launch of the Register on 22 April 2002, over 3,000 war memorials and 250,000 veteran names have been logged. Hundreds of memorials across the state have benefitted from conservation work under the Community War Memorials Fund, with over 400 grants awarded amounting to around $3,000,000. 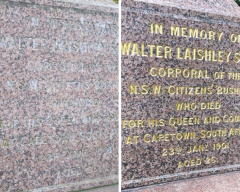 Before and after CWMF funded conservation works to the Corporal Walter Laishley Spier Memorial in Hunters Hill.   Works and photography by International Conservation Services

Yet the far greater value of the Register has been in preserving the stories of service and sacrifice that are inextricably tied with these memorials. For many contributors like David it is uncovering the human experience of war and loss that becomes a key motivation in their ongoing involvement with the Register.

Whether it is piecing together the life of Great War nurse Sister Amy Bembrick who appears on not one but five memorials or the story of three brothers listed on Goulburn’s Rocky Hill Honour Roll, where following the death of two brothers, the third deserted. During his subsequent court-martial the soldier stated that when the news had reached him, he resolved that his family had done enough. 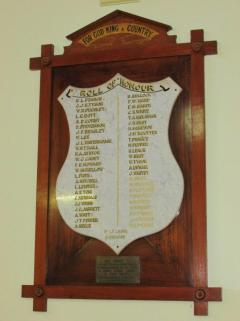 One of the most moving stories David has come across was while he was sifting through the archives of the Uniting Church, a collection which had grown considerably with the acquisition of records from Methodist, Presbyterian and Congregational churches. Filed amidst the papers of the Parkes Methodist Church, unseen for decades, David discovered a letter dated 11 November 1915.

The edges of the pages have become worn with time, yet the closing lines written by Anthony Pugsley regarding the inclusion of his son’s name on the church’s honour roll still hold an aching resonance over a century on:

‘we shall be more than pleased to have our Roy’s name on your list. We have heard nothing further concerning him, and this suspense & anxiety is killing.’ 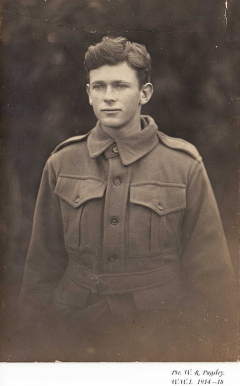 It had been eleven weeks since the 18 year old was declared missing on 22 August 1915. While Anthony received a brief letter from his son dated four days later stating he was resting but not feeling well, and correspondence from Roy’s comrades confirmed that they had seen him in battle on 27 August, no further news had arrived.

With each casualty list that was published in the papers, Anthony poured through the names. His son’s service record is filled with pleas from the desperate father for any news.

Only after almost two years had passed did a court of inquiry deem that Roy was killed in action. His presumed date of death was listed as 22 August 1915, just six days after he had arrived at Gallipoli. His body was never recovered.

Memorials then become emblems of humanity. A physical testament to the grief shared by families across Australia who were otherwise left without a gravesite to mourn. They are expressive of ‘a real community emotion to remember and to record that terrible proportion of loss…it is the stories,’ David reflected, ‘that are the things which really impress and inspire. They are all so very, very humbling.’

When asked about the highlight of his experience thus far as a contributor, it was the stories, the people and the communities that was his answer, ‘and understanding at least from a distance the impact that the wars had on people.’

The impact of warfare is something that has always been on the periphery for David throughout his life, only brought into greater clarity following his involvement with the Register. From a former boss, now acquaintance, who spoke once of his father – a World War One veteran – who initially relished solitude after the tumultuous war years, isolating on a remote block of land at Dorrigo, to friends of David’s who returned from the Vietnam War forever changed. It was visible within his own family:

‘like many, my father rarely talked about the war. He did march in Sydney on a couple of occasions but I think for whatever reason he wasn’t all that keen and none of my uncles that I remember marched…so we were aware but you know it wasn’t something that was front of mind and…some of those honour rolls I would have walked past dozens and dozens of times, hundreds of times and never really taken it in.’

It was only after he began generating entries for the Register, that he noticed the way in which these memorials, which he aptly described as ‘hidden in plain sight’, suddenly emerged from the background and took on new significance. It is not uncommon for David to now stop the car to photograph a war memorial he has inadvertently stumbled across, even in drizzling rain or late at night with just his car headlights to light his path. ‘I’ve had heaps from my family about it,’ he remarked with a laugh, ‘but by the same token a number of them now photograph [memorials] and send them to me.’

What has become a particular source of amazement is the diversity of memorials that have emerged over the past century. From large structures like the Anzac Memorial to humble rock pools, street lamps and even a preschool that one of his grandchildren were looking to attend. This, in David’s mind, is what makes the Register such a valuable resource. In this central repository, users can discover and learn about memorials scattered across the state, whether civic, church or school related. In combining such an array, a more holistic image emerges not only of the way in which towns sought to commemorate those who served and those who never returned, but also the dramatic ways in which wars and the passing decades have dramatically shaped the social history of a certain area.

Tragically, David has also seen several instances in which these vital links to the past have been lost, with war memorials increasingly falling victim to redevelopment. It is this risk that he hopes will galvanise more people to become involved in the Register to record and preserve these relics.

‘For many it’s a very tangible and important link with the past, with key people in the past. We are funny people us human beings, but I think memorials of any kind, and particularly war memorials which represent such important things are well worth preserving…

[Many memorials] unless they’re recorded will just go, but hopefully the Register can encourage people to add them and have them remembered.’

While David will continue his hunt, certain that there are many more memorials still awaiting discovery, his key advice to anyone looking to become involved is to simply ‘photograph first and ask questions later.’