Michael William 'M.W.' Hardy was descended from pioneers of the Maitland area in New South Wales. The Maitland Pioneer Register records Robert Hardy (1st) arriving in Port Jackson from England in 1827, with his occupation listed as collier, miner and stone cutter. He married Dinah Clark and they had 11 children.  Their eldest daughter, Mary Ann (born 1824) said her father came to Australia as a stone mason under engagement to Australian Agricultural Company, (A. A. Co, est. 1824) and was the first man to take a stone out of the Pyrmont quarry.1 Robert and Dinah’s 5th son, also called Robert (2nd), was born on 2nd June 1833 in Sydney.

M.W. Hardy was born 2nd August 1867 to Robert (2nd) and Mary, nee Minchin Dowling, at Stoney Creek, Patrick’s Plain - the former name for Singleton. The family moved to Narrabri in c1876. On 6th June 1877, the press reported Robert selecting ‘Mollee View’ on the ‘Mollee Station’ as a conditional purchase of 80 acres ‘on the road from Wee Waa to Narrabri'.2

From the mid c1870s to 1907, Robert (2nd) also managed the Banna Banna Station, a large property 60 miles north-west of Narrabri in the vicinity of Mollee, where M.W. Hardy spent his childhood. As a youth, Hardy accompanied Charles Clark (a maternal uncle) on droving trips to Queensland and to Maitland ‘where an uncle induced him to enter the trade.  In three years [he] was an accomplished craftsman’. Hardy then worked in Sydney and Newcastle. He was a building contractor for ‘Edinglassie’ homestead owned by Hon. James White.3  On his return to Narrabri in 1876, Hardy acquired a former undertaker’s premises on the corner of Lloyd and Maitland Streets, Narrabri.  Hardy married Maudelle (Maud) Louise Facer in1894, the eldest daughter of Mr and Mrs John Facer, manager of ‘Gundemaine’ property via Narrabri. 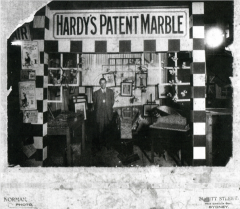 In addition to his career as a monumental mason, Hardy’s lifelong interests covered minerals, plants, native bees and local habitat, and these are reflected in his work. Reputedly he had remarkable geological knowledge, which included the sources of stones washed down from higher reaches of the Namoi valley after floods. Alluvial gem stones and gold had been found in the Bingara-Warialda districts in 1891.  Hardy continued prospecting throughout his life, registering a discovery of a new gold deposit near Bingara in 1932.4

Hardy also had extensive botanical knowledge of the north west of NSW and during his life planted many indigenous trees to prevent erosion.  He had great success in the germination of native seeds, sending specimens of one seed that was exceedingly hard to artificially germinate - an unusual native called the ‘Emu Apple’ (Owenia Acidula) - to the Sydney and Melbourne Botanical Gardens.5 He advocated that land degradation was not due to overstocking, but to the loss of native bee habit. An avenue of trees was eventually planted in Tamworth in his honour.6

M.W. Hardy died on 2nd December 1950 in Narrabri, aged 84 years. A member of Lodge Namoi since 1903, Hardy’s A Lodge of Sorrow service was attended by 18 members on 3rd December 1950, the same day as his funeral. He is buried in the Methodist section of Narrabri Old Cemetery alongside his wife Maud (d. 23rd July 1951) and Elsie Lillian Facer (died 29th June 1895, aged 6yrs 2mths).  His obituary cites:

“He was a master mason and regarded as the best letter-cutter in N.S.W. He received requests for his work from all parts of N.S.W., even as far afield as Tasmania.”7

For someone with such a talent for making beautiful monuments, the Hardy triple plot has a simple terrazzo surround. There may have been a fence as there are tubular holes in the top of each of the posts - possibly destroyed in the 1955 floods.8 Interestingly, the stone gate piers at the entrance of the Moree and Narrabri cemeteries were presented by Hardy in 1902.

M.W. Hardy had three surviving children. His eldest daughter Dr Marie Naomi Wing9 M.B., B.S., F.A.C.R.M., was appointed OBE in 1968 and elevated to CBE in 1979 for services to medicine. She died in 1985. Hardy's son, Kingston Michael Hardy, is recorded in the 1949 Moree Electoral Roll as residing in Greenbah Road (near the cemetery) with occupation as a monument mason.  Kingston married in c1944 and had 3 children born at Killingworth, one of whom – Roslyn Hardy - is buried in the Narrabri cemetery.

Hardy’s premises and business in Narrabri were sold to a stonemason named R Lightfoot.  The timber, two-storey house and shop, with a posted verandah, were demolished c1963 to make way for a Shell service station.

Can you help us identify and record M.W. Hardy monuments in New South Wales?