Please note, this is not an exhaustive list of terms. There are additional tips throughout the submission form to assist you to provide accurate information. For additional source material to support your research, please read our Researching war memorials and veterans page.

A memorial arch is a monumental structure in the shape of an archway with one or more arched passageways. Memorial arches are a classical form of monument building, dating back to the Ancient Roman tradition of building triumphal arches.

A baptismal font is a receptacle used in churches for performing baptisms. They often take the form of a stone or marble basin, mounted on a pedestal. Memorial fonts may have plaques attached or dedications inscribed on their surface. 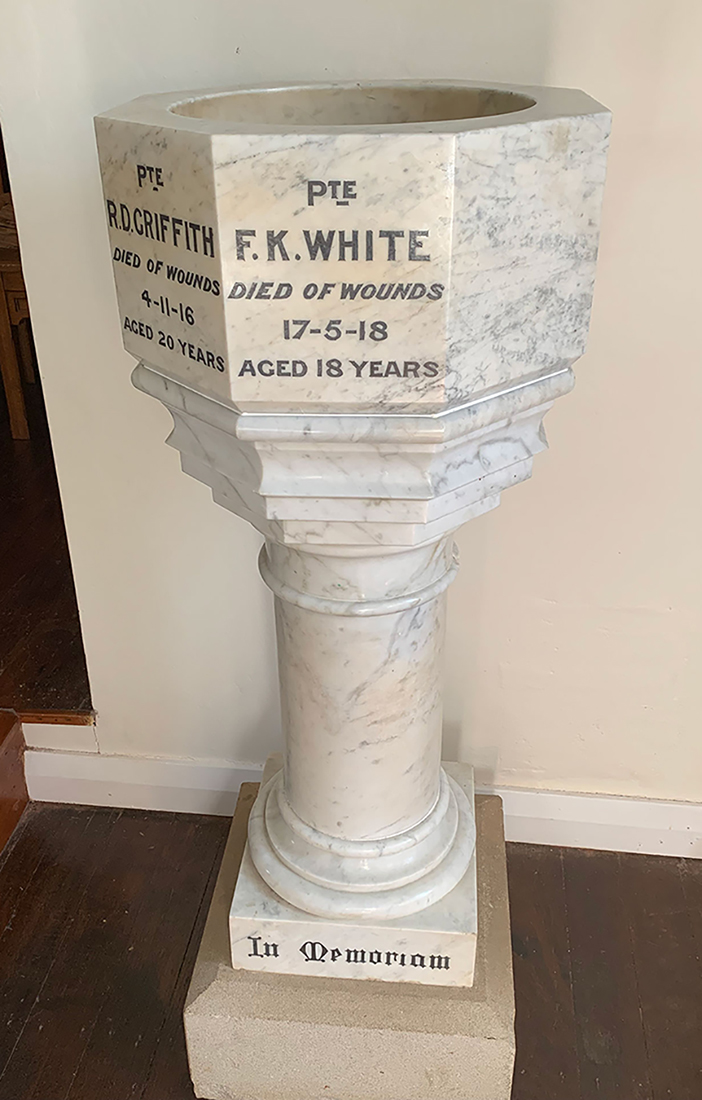 Honour rolls and memorial plaques are the most common form of war memorial found in NSW. They can take various forms; however, they are usually timber boards or marble tablets, listing the names of those who have served in conflicts or peacekeeping missions. Honour rolls are often mounted on a wall or bushrock, or attached to the side of a larger structure such as a building or a memorial column/pillar.

Memorial bridges can be either large or small pieces of infrastructure, designed for pedestrians, vehicles, or both. They can be dedicated to a group of servicepeople or an individual.

Examples include the Anzac Bridge. 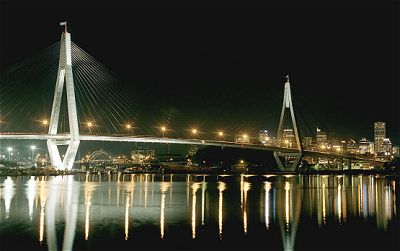 Many communities in NSW chose to build war memorials in the form of buildings such as town halls, community halls, libraries, hospitals, churches or ‘School of Arts’ buildings.

Examples include the Ashford Memorial Hall (left) and the Trundle War Memorial School of Arts (right).

A pile of stones, used literally or symbolically to mark graves. Source: Caring for our War Memorials

Examples include the Engadine War Memorial. 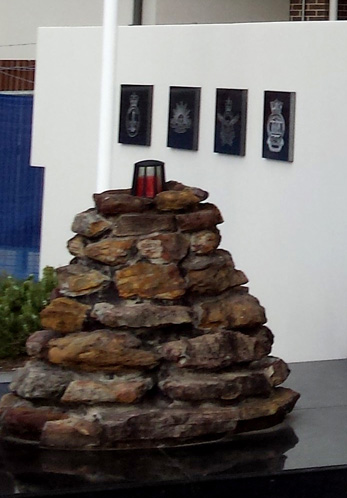 A symbolic monument marking the grave of someone who is buried elsewhere. The basic form is a tomb chest on a plinth but many First World War memorials are modelled on the 'stepped pylon' shape of the Cenotaph in Whitehall, London.
Source: Caring for our War Memorials

Examples include the Gosford Cenotaph (left) and the Cardiff RSL War Memorial (right).

Memorial clocks can include freestanding or wall mounted clocks, positioned in any location, bearing a dedication to service. Memorial clock towers are generally larger, fixed structures, made of brick or stone and are usually located in public spaces or incorporated into buildings. Sundials usually consist of a pedestal base with the sundial plate on top. They are usually found in gardens or parks and can have inscriptions or plaques attached.

Many war memorials in NSW are architecturally designed classical columns. The columns usually sit on an inscribed pedestal and may be topped with statues of a solider or angel, a globe or an orb (a spherical ornament that symbolised the British Empire). Pillars are generally wider and shorter than columns and may be positioned on a low platform or base.

Examples include the Killingworth War Memorial (left) and the Glenorie Roll of Honour Memorial (right).

The Christian cross is a traditional representation of sacrifice and remembrance and was a popular type of First World War memorial.

Examples include the Hay War Memorial. 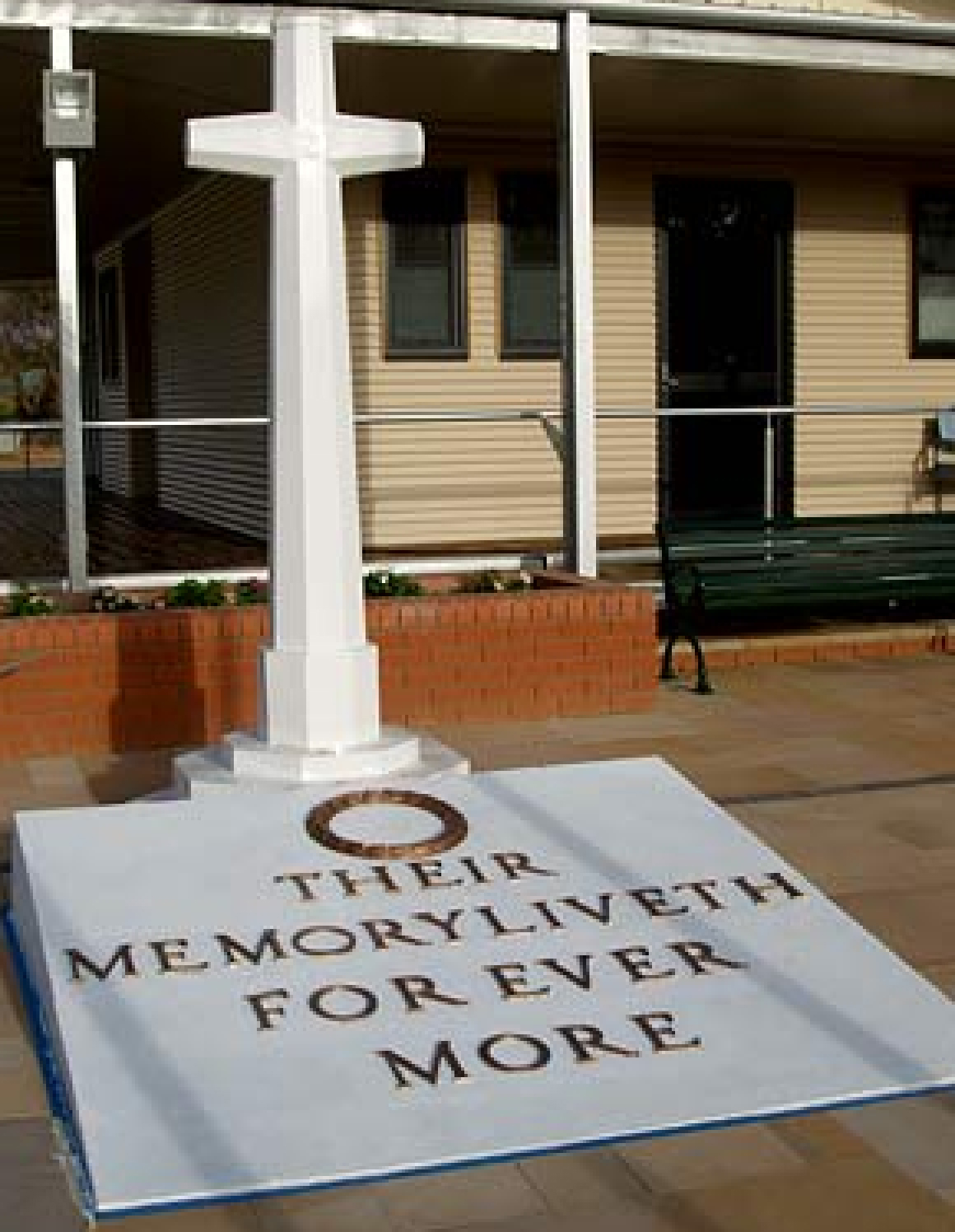 Flagpoles are a common contemporary memorial form. They are usually found in parks, schools, or public squares, either individually or in groups. They often serve as a focal point for commemorative services or wreath laying ceremonies and are sometimes added to an existing memorial at a later date. Dedication plaques are usually found attached to the pole itself or near the base on a plinth or bushrock. Memorial flags may be found on display in churches or similar locations. 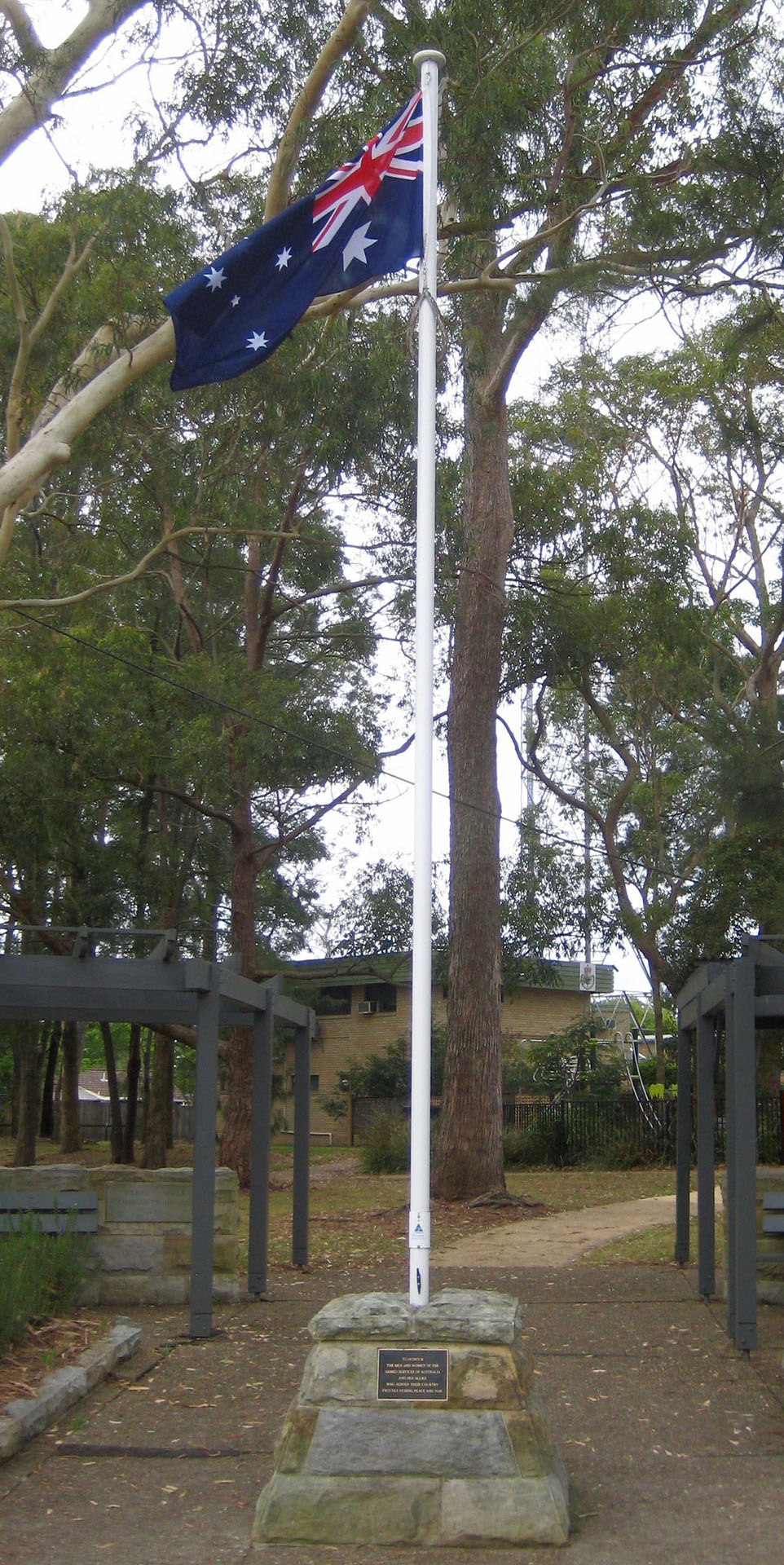 Memorial fountains are decorative water features, generally found in parks, other public spaces, or outside buildings such as RSL clubs. They can be constructed from a variety of materials and in a range of sizes. Drinking fountains are generally on a smaller scale to allow for users to drink comfortably. They can be freestanding or attached to a larger structure and are usually found in similar locations to decorative fountains.

Memorial gardens and parks can be on any scale, either on public or private land. They often contain decorative garden beds, symbolic plants such as rosemary and other memorials such as flagpoles or monuments. They are commonly used as a site for commemorative services.

Examples include the Gosford Memorial Park (left) and the Kellyville Public School Garden of Remembrance (right).

A memorial gate often consists of gate posts and an opening in a wall or fence. A lychgate is a roofed gateway to a churchyard.

Examples include the gates at the Nimmitabel Cenotaph (left) and the St John's Anglican Church WWI Lamp of Remembrance and Lychgate, Boorowa (right).

Memorial lamps are usually found along roadsides, in gardens or parks. The lamp fitting is generally mounted on a column or pole, positioned on top of a pedestal. The pedestal will often have plaques or inscriptions attached.

Examples include the Casino Mafeking Lamp. 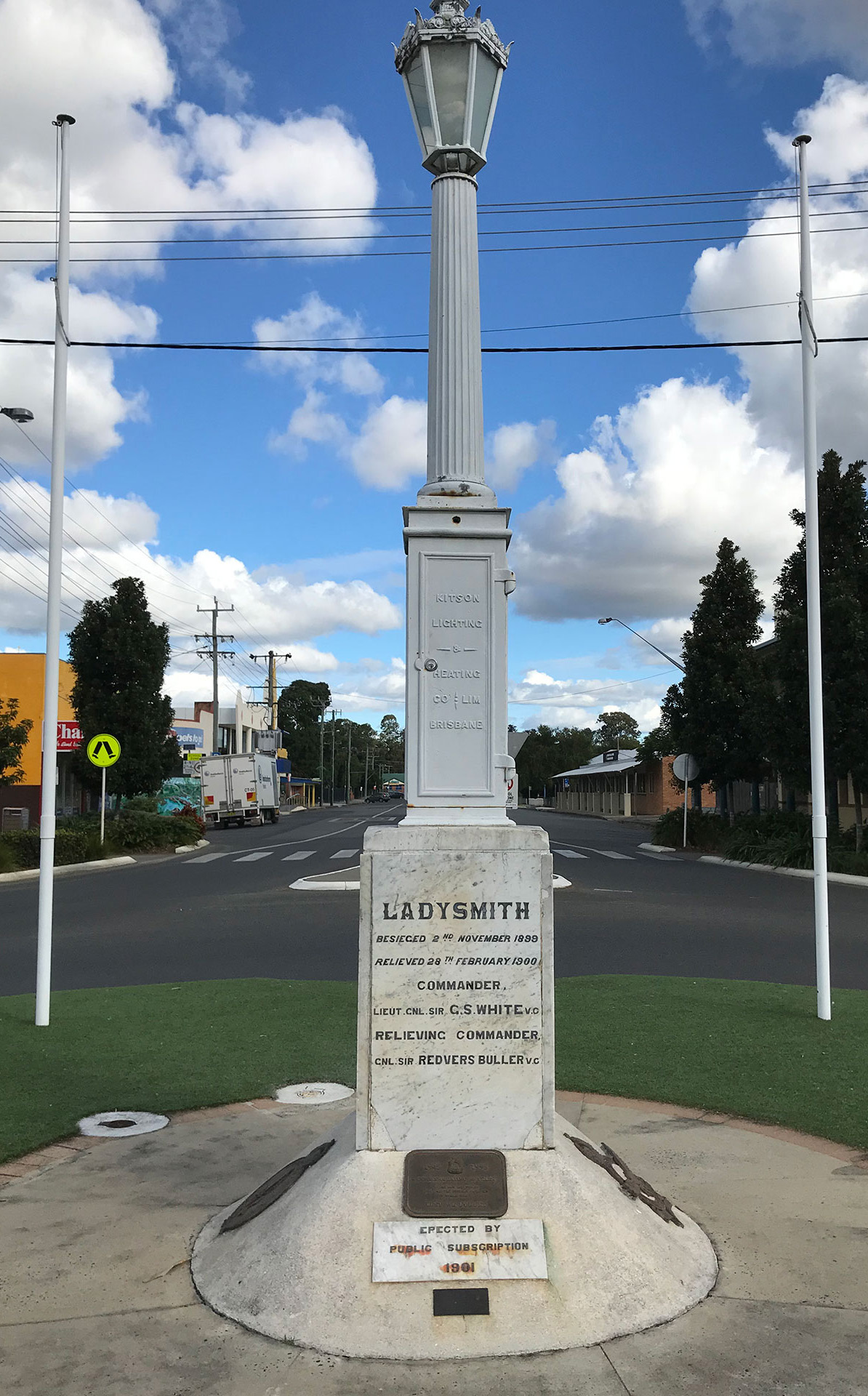 A memorial avenue is a dedicated mass planting of trees, also known as an avenue of honour. Each tree in the avenue often represents a specific veteran. They are generally planted along roadsides. Individual trees or plants can also be dedicated as memorials. The most common tree chosen for this purpose is the Lone Pine.

This term is used to describe a commemorative book in which the names of veterans are inscribed.

On the NSW War Memorials Register, the term ‘Monument’ is used to describe a memorial structure of considerable size and permanence that does not fall into a more specific memorial type listed in this glossary. Monuments are generally made of stone, brick or marble and are found within public spaces. They are often used as a site for commemorative services or wreath laying ceremonies.

The most common types of musical instruments dedicated as war memorials are pipe organs and carillons (a set of bells played with a keyboard or an automatic mechanism). They are usually found in churches or official buildings and can have plaques or honour rolls attached. 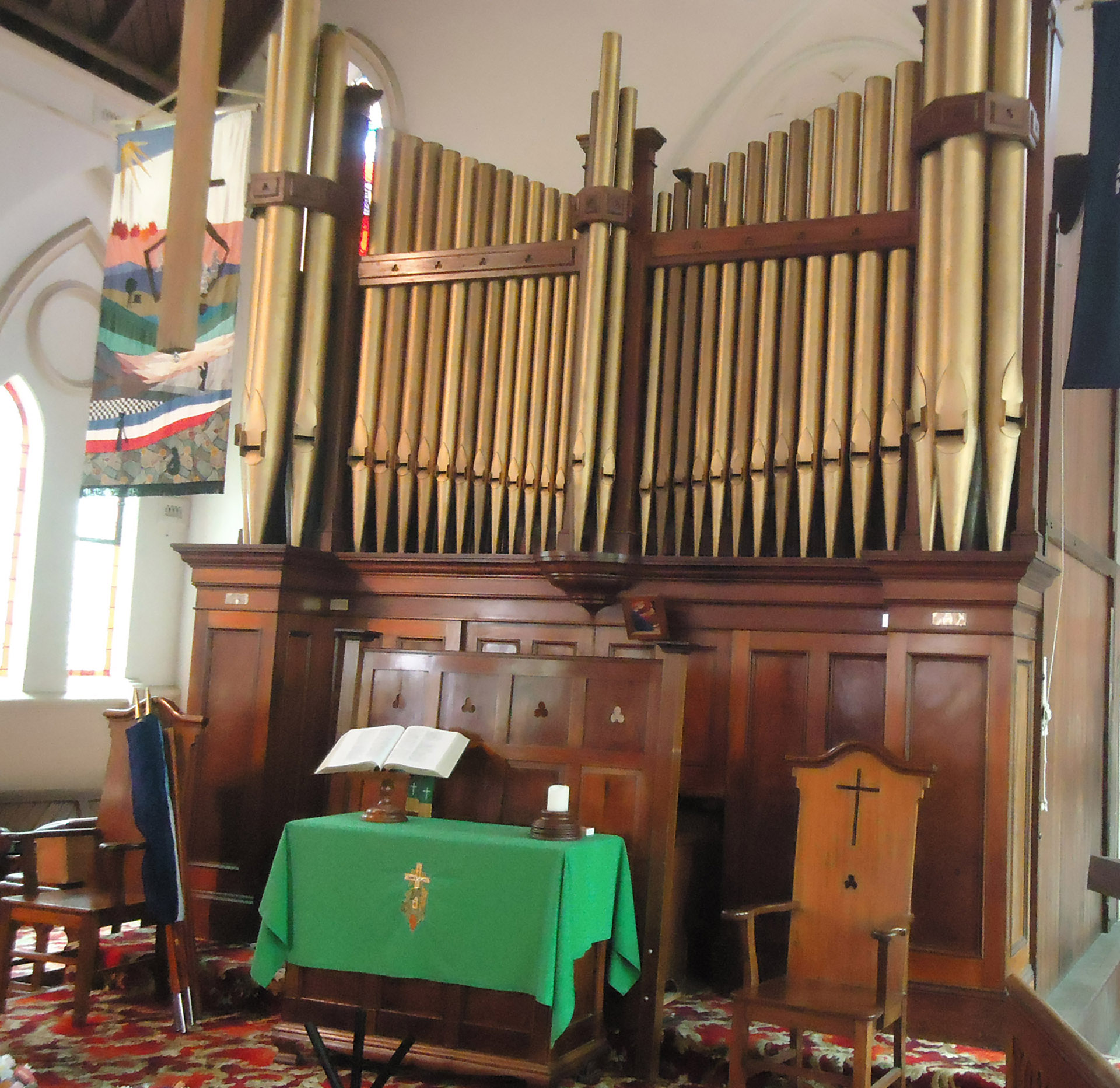 An obelisk is a tapered, four-sided pillar terminating in a pyramid at the top. Source: Caring for our War Memorials

Examples include the Wisemans Ferry and District War Memorial. 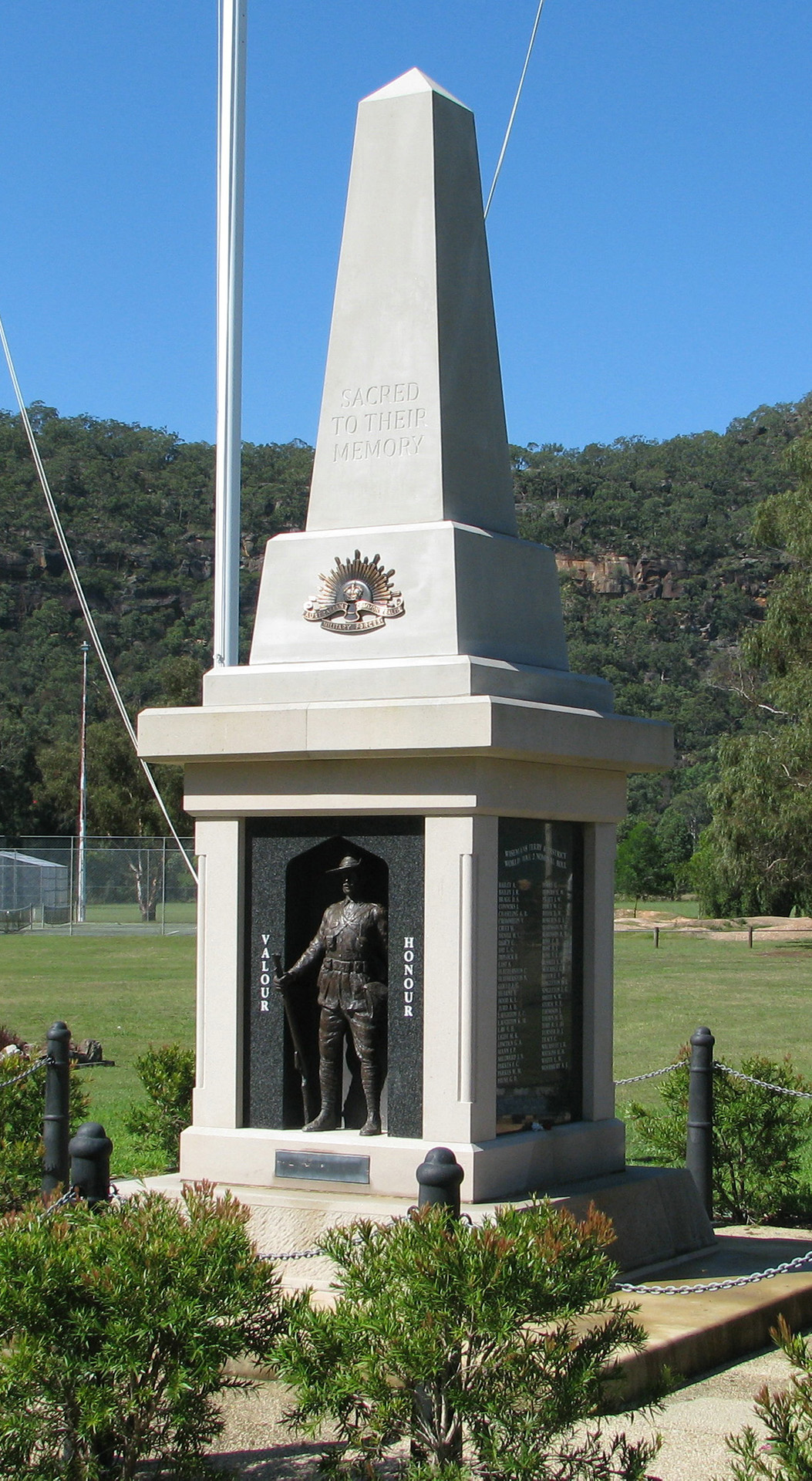 On the NSW War Memorials Register, the term ‘Other’ is used to describe an object or item which has been dedicated as a war memorial and does not fall into one of the memorial types listed in this glossary. They may also be unique or ‘one-of-a-kind' memorials with no, or only one or two, counterparts on the Register. Within this category are:

This category includes individual or multiple photographs that have been dedicated as war memorials, as well as honour rolls featuring photographs of the veterans alongside their names. 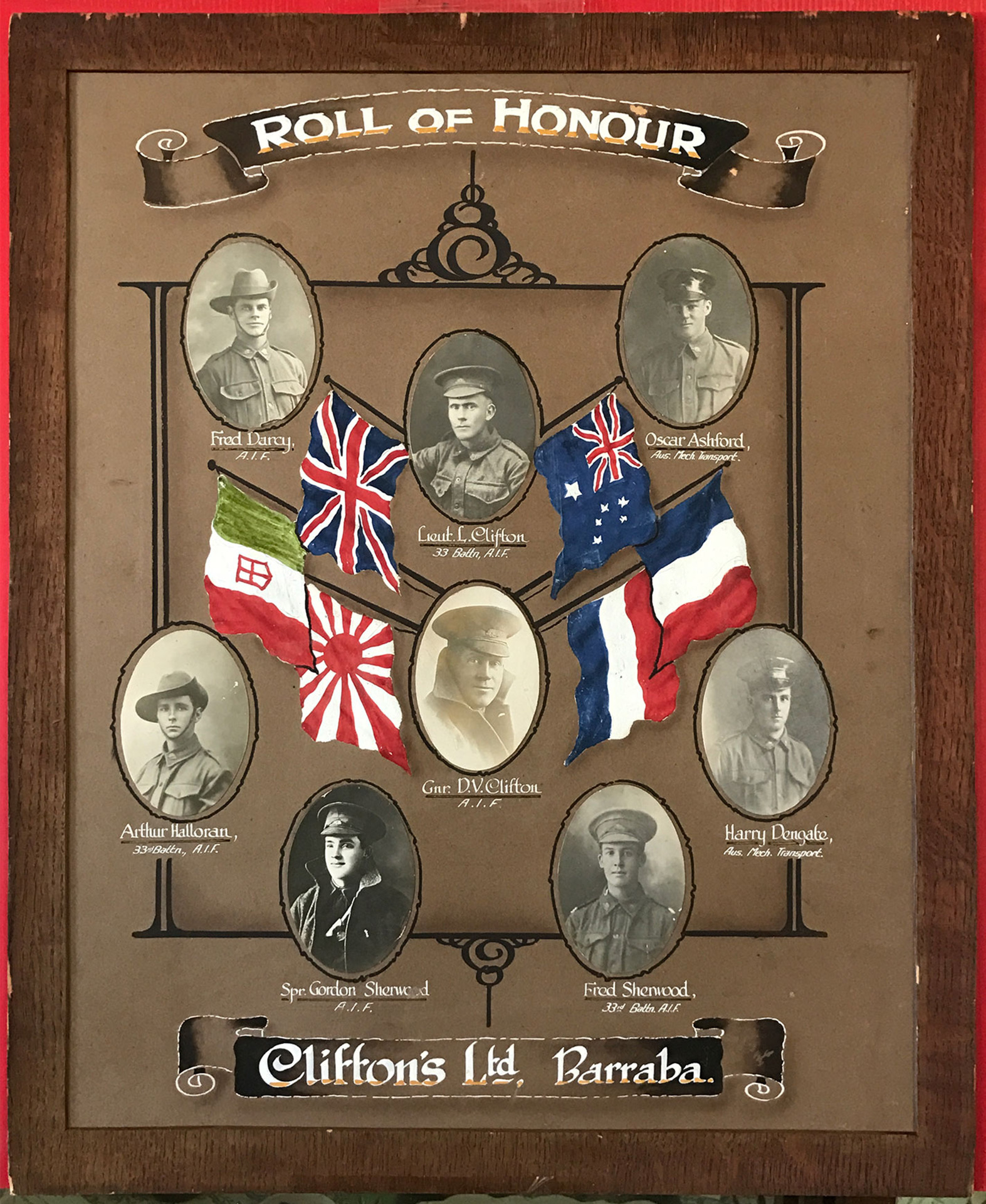 On the NSW War Memorials Register, the terms ‘Rotunda’ and ‘Bandstand’ refer to any outdoor structure consisting of a platform, usually raised, covered by a roof supported by posts or pillars. They are usually found in gardens or parks and often have dedication plaques or honour rolls attached to the structure itself or as freestanding memorials under the roof. 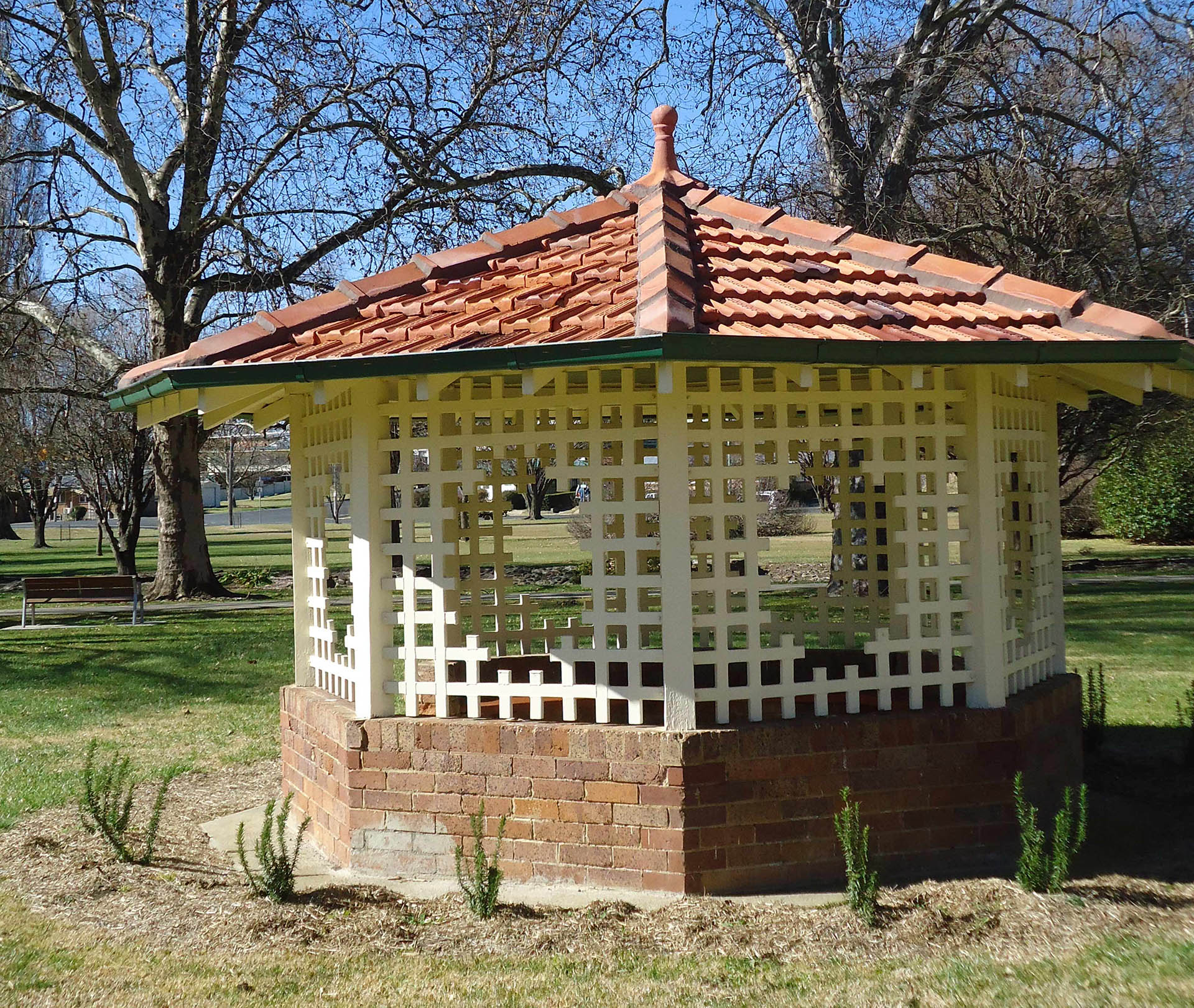 These are parcels of land designated for sports or similar activities that have also been dedicated as war memorials. They may include seating for spectators or buildings such as changerooms. 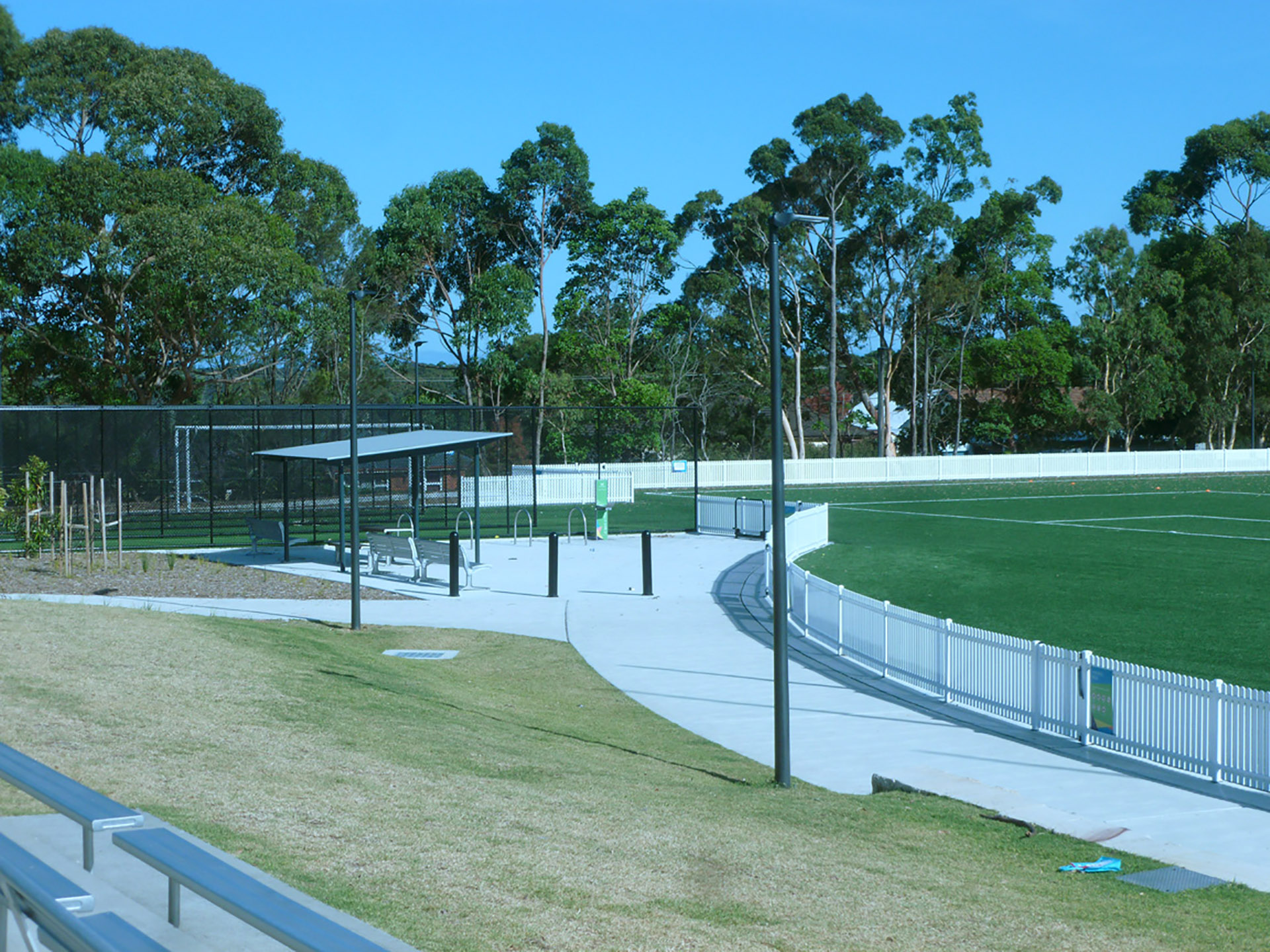 Windows featuring decorative coloured glass, often depicting religious or symbolic images. They are generally found in churches or other religious buildings. The glass pieces are joined with lead strips to form the design. Inscriptions can be included in the window itself or on plaques attached to the window frame or a wall nearby. 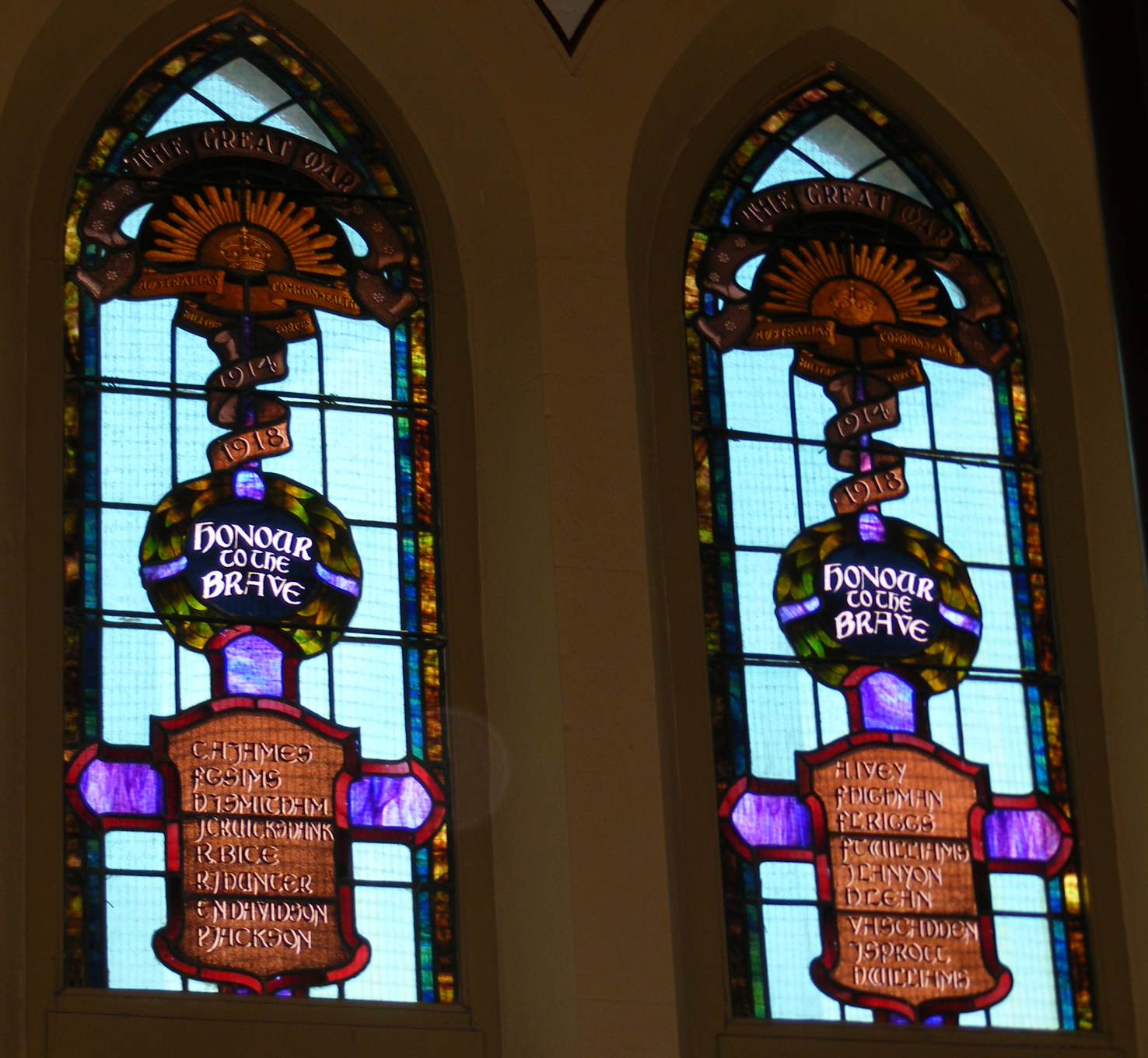 Statues and sculptures are three-dimensional artworks. Common memorial types include a digger on a pedestal, a bas relief embedded into or attached to the surface of a memorial, or a freestanding female figure representing 'Peace' or 'Victory'. Memorial artworks are generally two-dimensional and can include murals or mosaics.

Individual stones or bushrocks with plaques attached are a common memorial type. Sandstone, granite, and basalt are popular choices. They can be in their natural form or with some shaping of the surface.

Examples include the Molong and District War Memorial (left) and the Walcha Australia Remembers Memorial (right).

A pool or pool complex that has been dedicated as a war memorial. They are often Council or community run facilities and can include admission and changeroom buildings.

Examples include the Inverell and District Memorial Olympic Pool. 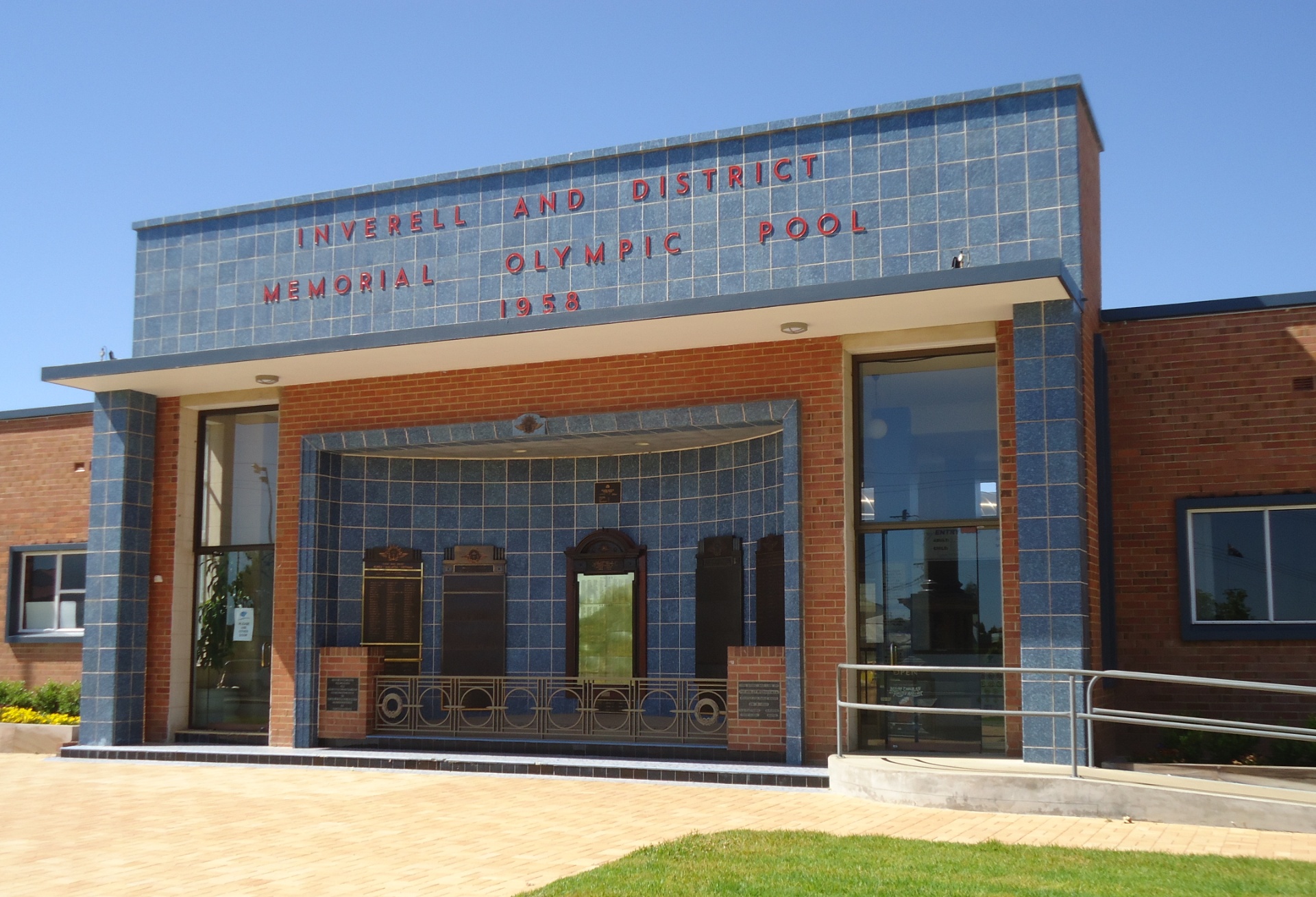 Memorial walls can be made from a variety of materials, in a range of shapes and sizes. They often have plaques or honour rolls attached and can be a site for commemorative services or wreath laying ceremonies. They are generally located in gardens, parks, or outside buildings.

Walkways can range from simple footpaths to larger scale infrastructure. They are generally accompanied by plaques and may connect other memorials. 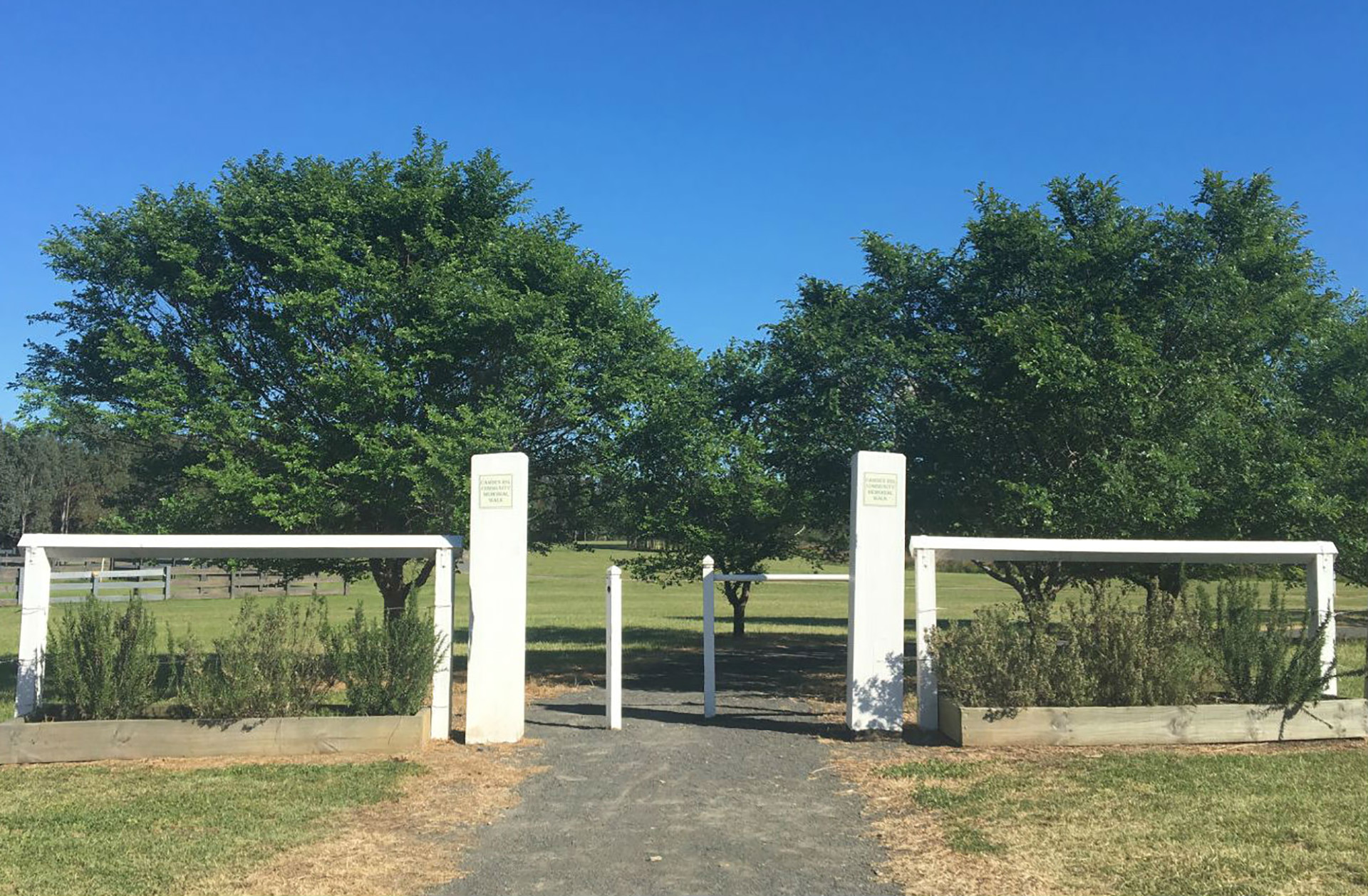 Incised lettering is a technique that involves cutting or carving letters into a surface.

Lead lettering is a technique in which lead is hammered into small holes, drilled into the stone as a key; letter forms are scored and cut with fine tools.
Source: Caring for our War Memorials

Gilding involves painting on a special adhesive then applying gold leaf with a brush. Gilding has an even, bright surface and does not tarnish.
Source: Caring for our War Memorials

An example of raised lettering may include names embossed in relief on metal plaques or tablets.

"Rank is the lawful authority given to a sailor, soldier, or an airman or airwoman to command others. The higher the rank, the more people he or she has to command and is responsible for."
Source: Australian War Memorial - Rank

A number given to a non-commissioned soldier between 1901–1921, used across the Commonwealth Military Forces and the First Australian Imperial Force (AIF). This system was abolished in 1921 and replaced with unique Army or service numbers.
Source: Australian War Memorial - Regimental numbers

"A phase of a war involving a series of operations related in time and space and aimed towards a single, specific, strategic objective or result in the war. A campaign may include a single battle, but more often it comprises a number of battles over a protracted period of time."
Source: Understanding War: History and a Theory of Combat, Trevor N. Dupuy